SUBSCRIBE   DONATE LOGIN SHOP
SUBSCRIBE   DONATE
How we prevented a Morrison dictatorship
How Howard screwed the Libs
U.S. site tries to ruin what makes fairy bread great
Bloody Idiot of the Week — Episode 28: Get used to it
Morrison's 'politics of retribution'
War

Abbott and Obama’s Iraq: The war that is and is not

The answer to those questions is strictly in the hands of whoever is in charge of a country at a particular time.

Tony Abbott badly needed a war, or something like it, when his Government was being shredded a few weeks ago — firstly because he lied to the population about everything his government intended to do. He lied before the election and he lied again after the election when he said he didn’t lie.

The angry backlash had begun to look serious for his Government.

For a short while two terrible aeroplane crashes gave Abbott the opportunity to appear to be doing something. Very soon, however, people began to wonder whether his racing around the world could do anything at all about bringing back all the dead people who had died in the southern Pacific and at the edge of the Ukraine.

The murderers who appeared out of the Islamic State of Iraq and al-Sham gave Abbott his real opportunity.

Way back in 1950, just half a decade from the end of World War II, when the battered nations of the Holocaust era were just beginning to get over the horrors and rebuild their world, when the United States decided something had to be done about North Korea. President Harry S. Truman, the man who had decided to use two atomic bombs to finish the conquest of Japan, then came to a decision that the Americans ‒ and some of their allies, including Australia ‒ should join with South Korea to try to prevent the invasion from the north.

He authorised the release to the newspapers of a document that carried the words:

‘… police action under the United Nations.’

The police action continued for three years and it has not ended, because American troops still remain in South Korea watching the border with the north. Nearly seventy years later, the forgotten war – the war that is not a war – has not ended yet despite years of vain negotiation.

“… we will not get dragged into another ground war.”

Instead it is a “counter terrorism campaign” in the president’s words, but our Tony Abbott decided that it was a war and he is throwing the Australian army and air force right into it.

More recently, Obama has decided that American troops still in Iraq, should be part of a routine policy which America has been following in Somalia and Yemen aimed at securing “national security” and to “protect of our people” — meaning the workers of U.S. oil magnates.

For a president to declare war, he must get the approval of Congress within sixty days. So, his language has included the words “counter terrorism” and “national security” because that gives him more freedom of action. He has acted on these measures without asking Congress for anything, according to a recent article in the New Yorker.

In the meantime, we have Syria to think about; 200,000 people have died in that war and millions more have fled from their homelands successfully seeking refuge in other sympathetic countries.

In Australia, we have a news media today that reeks of sheer bullshit, making headlines of nothing, scaring the pants off many in the population, arguing endlessly about what women should be allowed to wear or not to wear. Inside our population, we undoubtedly have a number of people who have come to Australia and received citizenship but there will always be some who will abuse the freedoms that Australia offers them.

Tony Abbott and his favourite dinner companion Rupert Murdoch are playing a game with the Australian people, while at the same time our police and security forces are doing all that is reasonably necessary to keep us safe. At the same time, we need to be concerned that the opposition side of our parliament must be convinced that Abbott is doing the nation no good.

There are plenty of people in Australia now who are well aware that the country is being taken for a ride for outrageous political chicanery and it needs to be stopped.

I would love to know the subject of the dinner conversations of Abbott and Murdoch. Particularly Murdoch, whose obsolete views on practically everything I learned years ago. 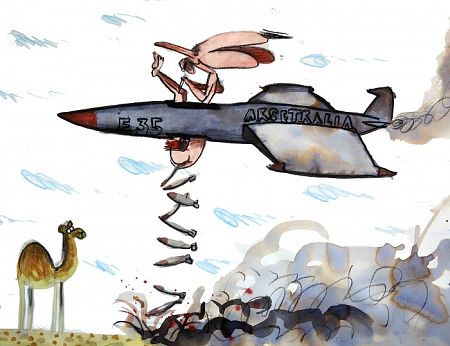