A right Royal pain in the Commission

Royal Commissions are meant to be best inquiries of all, however after preparing a statement for the Union Royal Commission,  Peter Wicks from Wixxyleaks says the process is biased against the little guy.

THIS WEEK, I have finalised my witness statement for the Trade Union Royal Commission (TURC) and put evidence together.

It is great I have had the opportunity to present evidence that, until recently, has been brushed aside by Victoria Police, Liberal Party diehards and, until a couple of months ago, most sections of the mainstream media.

Indeed, I can see why Kathy Jackson may have chosen to deliver her evidence regarding Michael Williamson via the press, as the police seem in no hurry at all to lift a finger until the media started to make the fraud squad appear to be frauds themselves.

We can also clearly see why Kathy Jackson does not like the media having access to evidence. The result of this has been that she now finds herself in a similar position to Craig Thomson was with the media back when she was first pointing a crooked finger in his direction, rather than wildly in every direction as she appears to be doing now.

However providing evidence and a statement to a Royal Commission has opened my eyes somewhat to the way they are run and what improvements should be made.

Royal Commissions are viewed in Australia as the ultimate in inquiries. They are seen by the public as a means of getting to the bottom of corruption within our system because they have the capability of probing into dark corners that other types of Inquiries cannot reach. One of the other reasons the public look up to Royal Commissions is that anybody is capable of having a say if they feel it is something that is important to the process or if they have evidence or an allegation to put forward.

As anybody who has read any of my writing on the Health Services Union would be aware, this Royal Commission into selected trade unions was of special interest to me — particularly given it included the HSU.

As I mentioned, there is the perception that anybody can have a say in a Royal Commission, however I think this is a perception worth looking into, as it is probably not as easy as many may expect.

In order to submit a statement, or other evidence, it must meet criteria that can be found via the Royal Commission website, which one needs to visit to know how to submit the information.

Upon finding the website, you will then go to the page entitled “Providing Information”,  where you will see a number of scenarios.

There are the options of giving information as a whistleblower, a union official, or someone with knowledge of the funding of union elections. All of these options come with a hefty document to read which cross references various parts of the Fair Work (Registered Organisation) Act 2009, which at a mere 515 pages is not exactly a lightweight document.

If someone wishes to appear, there are also Terms Of Reference to get your head around, something written in a convoluted legal language.

All of this may seem rather daunting to someone looking to give evidence, unless they have the wherewithal and resources to enlist to a lawyer able to appear for them before the Royal Commission.

Try to imagine a junior staffer in a union, or an apprentice on a building site, getting their heads around all of this legal talk, or having enough money to fund a lawyer who will take on their employer or union in such a public manner. I think it would be a major issue for most.

The way that giving evidence before the Commission then works is that the ones' best able to appear or give evidence would be those with political backing or the financial backing of others with vested interests.

Far from being intimidated by their baseless allegations, however, I welcome them as by naming me in the Royal Commission, it gives me the opportunity to respond with actual evidence.

These desperate attempts to smear me highlight the desperate need to distract others from evidence being presented and cover up even more significant allegations.

Below is a copy of the letter I received from the Commission that addressed my right of reply. 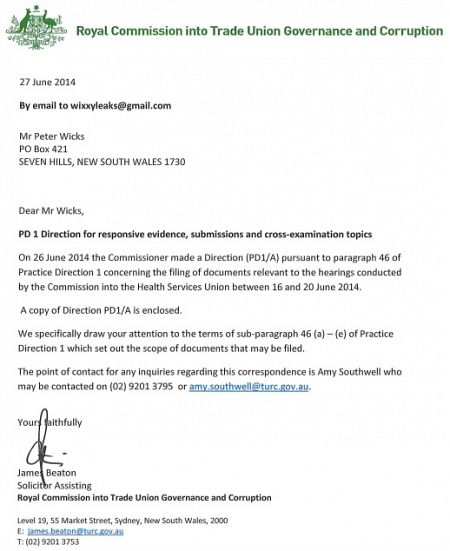 This letter is basically lawyer speak saying that I could make a statement or apply to cross-examine witnesses — but yet again, cross-examination is something that many would be loath to tackle without seeking costly legal advice.

Yet another road block for the average person.

After seeking legal advice from those with appropriate qualifications, I came to the decision that, at this time, I would not seek to cross-examine the witnesses in question – Katrina Hart and Kathy Jackson – as tempting as that prospect may initially appear.

The reason for this is because I do not have an endless supply of funds or a team of right wingers willing to financially support my legal costs. The overall consensus amongst those I asked was that, if I were to cross-examine Kathy Jackson, then I would be dragged in and out of court and be up for huge legal costs.

Providing a statement means that I can put all the evidence forward and hope that the Commission, in its wisdom, doesn't decide to censor out the parts that don't fit into their narrative  — as they did to Bruce Wilson.

Now I could probably find some way of financing legal services, however I’m not the type who likes owing favours and one can well imagine what a lay person faced with the prospect of massive legal fees would decide.

The issue with doing nothing, as some suggested, is that whatever ridiculous statements made against me would stand and it could and probably would be presented at a later date that I did not argue against the allegations, no matter how preposterous.

Several in the legal profession validly pointed out to me that Kathy Jackson and Katrina Hart, and those associated with them, have now destroyed their credibility entirely, and nobody takes anything they say at all seriously. However, I am someone who likes people to be held to account for their words, as well as their actions. Thus, I have addressed their false and highly defamatory claims in a statement.

Rather than go through the whole ordeal of cross-examination, I thought that I’d put things into a witness statement, along with the evidence I have.

Again, this was not an issue for me, however I can imagine it well might for someone not so computer literate.

Anyway, I thought some of you may be interested in the process involved with taking part in a Royal Commission and make your own judgements as to its fairness.

Many have asked me what happens next.

As far as I am aware, the HSU matters come back before the Commission in August — although I’m not sure exactly when in August that will be.

At that time, witnesses will be cross-examined by interested parties.

My statement is based on evidence and witness statements only, while Jackson's defence seems to be based on a particularly entertaining segment of a 1982 episode of the popular BBC TV comedy Yes Minister:

James Hacker: How am I going to explain the missing documents to 'The Mail'?

Sir Humphrey Appleby: Well, this is what we normally do in circumstances like these.

James Hacker: [Reads memo.] This file contains the complete set of papers, except for a number of secret documents, a few others which are part of still active files, some correspondence lost in the floods of 1967...

Sir Humphrey Appleby: No, a marvellous winter. We lost no end of embarrassing files.

For those whom have asked I am unaware if Jackson has claimed that the silver surfer alien was riding the waves of this alleged flood, nor am I aware of there being any claims of Noah’s ark washing in.

At least, not yet.