Like the “Anzac legend”, the 1916 Easter Rising in Dublin is symbolic of that country’s birth pangs into nationhood. The death of a Rebel represents the clash of potent national symbols, executed through the heroic figures of Anzac Digger and Irish Rebel, writes Raymond M Keogh.

TROOPS OF THE combined Australian and New Zealand (Anzac) forces, who were defending Trinity College during the 1916 Rising in Dublin, gunned down Gerald Keogh – an Irish Volunteer – who was returning to the General Post Office on an assignment given to him by Patrick Pearse, the leader of the movement.

The soldiers who shot Gerald were in the city on furlough from front-line duties in France during the First World War. How ironic that Gerald was killed shortly after 4.15 a.m. in the dull light of dawn, the very hour that Australians and New Zealanders cherish to commemorate their own fallen at Gallipoli in 1915.

The creation of what became known as the “Anzac legend” is often described as the birth of the nationhood of both southern hemisphere countries. Of course, the 1916 Easter Rising in Dublin is also considered symbolic of Ireland’s birth pangs into nationhood. As such, Gerald’s death represents the clash of potent national symbols, executed through the heroic figures of Anzac Digger and Irish Rebel.

The killing of Gerald was quickly forgotten by the Irish and Anzacs alike. Indeed, he is often described simply as a despatch rider by historians who have little knowledge of who he was. As a result, an interesting vignette of Irish history was buried. Few know that his elder brother J. Augustus returned to Ireland from London to be with his widowed mother because of Gerald’s death. J. Augustus became manager of the Abbey Theatre in the aftermath of the Rising.

His decision to come to Dublin was fortuitous for one playwright – George Bernard Shaw – who had protested against the execution of the 1916 leaders in The Daily News (cf. p. 99). He stated:

‘… an Irishman resorting to arms to achieve the independence of his country is doing only what Englishmen will do if it is their misfortune to be invaded and conquered by the Germans in the course of the present war.'

This kind of comment was not well received in London during the jingoistic climate of conflict. Shaw’s box-office appeal in England slumped but J. Augustus saw to it that Dublin audiences were swamped with his works. 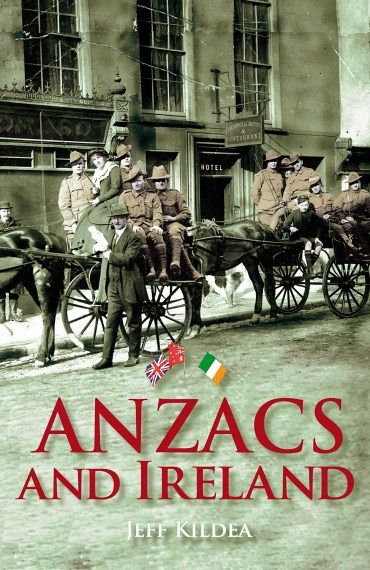 It is only in recent years, with the publication of Jeff Kildea’s Anzacs and Ireland, that Irish people have become more widely aware of the involvement of Dominion troops in the Rising. Jeff’s book inspired Kevin McCarthy and Geoff McArthur to compose the song Digger in Dublin.

The digger in question was the Anzac sharpshooter, Michael McHugh, who laments his part in the killing of Gerald. He was given a silver cup for his efforts but never revealed his part in the Rising after returning to Australia. He probably had good reasons to conceal his story, considering that his parents hailed from Ireland.

The unfortunate event takes on new relevance on the centenaries of the landing of Anzac troops at Gaba Tepe and the 1916 Easter Rising in Dublin. It is an international incident that requires sensitive handling during these commemorations. Or perhaps we can look at it from a different perspective.

A century on, we are living in a new world in which old values are being questioned. Tangles of contradictions have surfaced that will have to be faced during the respective centenaries.

The words of Martina Filová, borrowed from her thesis Controversies of the Anzac Legend, are applicable to both commemorations. The legends on which the respective identities of all these countries have been established bring up:

How, it is sometimes asked, can the Anzac idea – a myth derived by white populations – serve as the base of nationhood and identity, when the native populations were conveniently ignored? And how can the national Irish myth – which was based on an inflated sense of connectivity of all Irish men and women to Gaelic Ireland – satisfy the identity of all citizens, when alternative traditions were expediently forgotten?

An alternative and more advantageous approach is to use these challenges to explore the real meaning of “Identity”. This explains why Anzac Day 2015 will mark the beginning of The Gerald Keogh Identity Series. The Series will attempt to untangle the numerous misunderstandings associated with the concept and derive a new and more universal meaning with international appeal and applicability.

If successful, the exercise will have achieved the conversion of introspection and remembrance into a durable legacy; it will have given some lasting meaning to Gerald Keogh’s death.

Note: Gerald Keogh was the half brother of Raymond’s grandfather. More information on identity, and his family – known as The Keoghs of Ranelagh – will be explored in his forthcoming book due for publication in 2016.

For stories you don't see in mainstream media, subscribe to IA for just $5.

24 April 2015, 7:00am Like the “Anzac legend”, the 1916 Easter Rising in Dublin is symbolic of that ...
Join the conversation
comments powered by Disqus
News updates