British musician Steve Priest, best known for his role as bassist and one of the lead singers of glam rock band The Sweet, has died of undisclosed causes. He was 72.

He was born Stephen Norman Priest in Middlesex, England, on 23 February 1948 and glommed onto 60s bands such as The Shadows, The Rolling Stones and The Who as a teenager.

Priest developed proficiency on a bass guitar he built himself and joined forces with vocalist Brian Connolly, drummer Mick Tucker and guitarist Frank Torpey in 1968 to form The Sweetshop, which later evolved into The Sweet. Torpey left the group within a year and was replaced by Mick Stewart, who also left the band within a year. Finally, Andy Scott joined in 1970 and completed the classic line-up which started scorching up the charts.

The Sweet was huge in the UK, achieving 13 Top 20 hits during the 1970s alone. They also charted internationally. One of their early singles, ‘Block Buster’ (1973), topped the charts.

In ‘The Ballroom Blitz’, Priest sang the memorable line, “there’s a girl in the corner that no one ignores, ‘cos she thinks she’s the passionate one”.

As The Sweet’s music evolved into a harder rock style, Priest often backed up Connolly’s vocals with his distinctive high-pitched voice, which soon became an integral part of their sound on tracks such as ‘Fox on the Run’ (1975).

It could also be fairly said that Priest adopted a sartorial style that was as “camp as a row of tents”. He loved heavy makeup, glittering stage costumes and was on the vanguard of the glam rock movement.

While chatting with David Bowie backstage on Top of the Pops, Priest said:

“I was plastering on this makeup and Bowie’s going ‘Oh, no, no, no! You’ve got to be subtle!’ Bowie just didn’t get it. I’m supposed to look like an old tart.”

In a later interview, Priest described Top of the Pops as a “stupid show” and said there was great pressure to stand out.

Priest caused much controversy in 1973 when he appeared on the Christmas edition of Top of the Pops wearing a German military uniform and a Hitler moustache.

“It’s amazing how everyone still talks about the Nazi uniform. Good old BBC wardrobe department. People always want to know if I was serious. I mean, a gay Hitler. Hello?!”

The Sweet achieved their last international success and comeback in 1978 with the incredibly beautiful and complex ‘Love is Like Oxygen’.

After Connolly left The Sweet in 1979, Priest became the lead vocalist and continued in this role until the band broke up in 1982. He also remained close friends with Connolly until Connolly’s death in 1997.

Attempts to reform the band in the later '80s failed and Priest continued in the music industry as a producer and session musician.

In 1994, Priest published his autobiography ‘Are You Ready, Steve?’ This line was taken from the introduction of ‘The Ballroom Blitz’ when Brian Connolly counts in the song with: “Are you ready, Steve? Andy? Mick? All right, fellas, let’s goooooo!”

In 2008, Priest formed a new version of The Sweet that did well on the nostalgia circuit.

His death prompted a flood of tributes.

Bandmate Andy Scott, now the sole surviving member of The Sweet’s original line-up, said Priest was the best bassist he had ever played with.

‘From that moment in the summer of 1970 when we set off on our musical odyssey, the world opened up and the roller coaster ride started. I am in pieces right now.’ 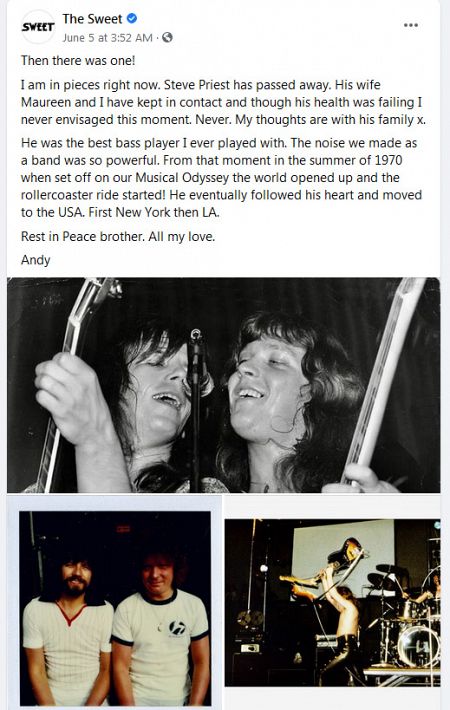 Captain Sensible from the 1970s punk group The Damned wrote:

‘When Sweet were on... you sat there in awe thinking sod the school careers adviser – that’s the job for me – and they wound your parents up something rotten too, which was a bonus.’

TOTPs, when Sweet were on.. you sat there in awe thinking - sod the school careers adviser that's the job for me - and they wound your parents up something rotten too, which was a bonus. Steve Priest RIP. https://t.co/lb9fV8EUyt

David Ellefson of the metal band Megadeth said Priest was ‘without parallel’:

‘They gave me one of my earliest memories of great hard rock on the radio as a kid and “Desolation Boulevard” still holds up as one of rock's greatest albums from that period.’

Very sad to hear of the passing of Steve Priest from @spsweetband . They gave me one of my earliest memories of great hard rock on the radio as a kid and "Desolatjon Boulevard" still holds up as one of rocks greatest… https://t.co/ISTX9kxQks

Jenny LeComte is a Canberra-based journalist and freelance writer.