It’s been just on 35 years since Les Murray’s 'The Vernacular Republic' selection of poems was published. This was one of the landmarks in Australian literature. Les Murray is the outstanding poet of his generation and one of Australia's most influential literary critics. A nationalist and republican, he sees his writing as helping to define, in cultural and spiritual terms, what it means to be Australian writes history editor Dr Glenn Davies.

The late 1970s were heady days for Australian republicans.  here were many Town Hall meetings, rallies, and calls to “maintain the rage” after the 1975 Whitlam dismissal. Donald Horne, Jim McClelland, and Manning Clark addressed a public protest entitled “Kerr and the Consequences” on 20 September 1976 at Sydney Town Hall.  The meeting explored the Australian constitution and ways they believed it could be changed for the better. This was also the year Les Murray published his selected poems, The Vernacular Republic.

Leslie Allan Murray was born in 1938 in Nabiac, a village on the north coast of New South Wales, and spent his childhood and youth on his father's dairy farm nearby. The area is sparsely populated, hilly, and forested, and the beauty of this rural landscape forms a backdrop to many of Murray's best poems, such as 'Spring Hail':

.. Fresh-minted hills
smoked, and the heavens swirled and blew away.
The paddocks were endless again, and all around
leaves lay beneath their trees, and cakes of moss.

His parents were poor and their weatherboard house almost bare of comforts. Murray remarked that it was not until he went to the university that he first met the middle class. His identification was with the underprivileged, especially the rural poor, and it was this that gave him his strong sense of unity with Aborigines and with 'common folk'. 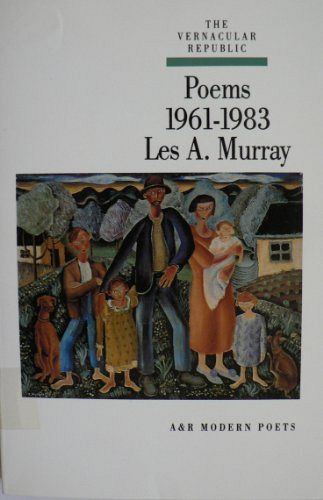 In Les Murray’s 1976 The Vernacular Republic his selected poems demonstrate how it is Australian language that is at the core of the national identity. It is the independence of an idiomatic Australian dialect that distances the fringe from its English centre. Murray’s poetry shifts our perceptions to show life centred ‘here where we live’. Murray writes of The Macquarie Dictionary (1981), in his review-essay "Centering the Language", that it shows

'...how much larger and richer our dialect is than many had thought, in part by gently but firmly shifting our linguistic perception, so that our entire language is henceforth centred for us, not thousands of miles away, but here where we live.'

The use of the title The Vernacular Republic for his selected poems brings home the point that a community becomes culturally independent in its use of a local language dialect, or a ‘vernacular’. Vernacular is one of Les Murray's favourite words and he often claims to be speaking in Australian rather than English.

Les Murray, both in public life and in his poetry, is an avowed believer in Australian cultural sovereignty. He is unyielding in his defence of a belief that has grown out of a desire to give voice to a very particular Australian identity, which to Murray's mind emanates from the Bush. Dispossession, relegation, and independence become major preoccupations of his poetry. Beyond this, though, his poetry is generally seen to have a nationalistic bent. The continuing themes of much of his poetry are those inherent in that traditional nationalistic identity of the 1890s — respect, even reverence, for the pioneers; the importance of the land and its shaping influence on the Australian character, and bush-bred qualities and values such  as egalitarianism, practicality, straight-forwardness and independence. For Murray his rural-centred Australian ‘vernacular republic’, although superficially modified by modern times and technologies, continues to exist essentially the same as it did in earlier times. Raised on bush traditions, he sees bush ballads as being vital to the national literature. In some ways herein lies the core of Murray's much vaunted opposition to modernism — that it is a concept of the technological worlds of the northern hemisphere, ignoring and even obliterating the place-specific voice of a popular literature.

Les Murray used the idea of a ‘vernacular republic’ for his 1976 edition of selected poems, where the Australian vernacular is held to be the key to understanding Australian identity.

It is "the matrix [of Australian] distinctiveness" he says, "[w]e are a colloquial nation", a "vernacular republic".

Murray’s poetry locates us as a people here, in Australia, not thousands of miles away on the other side of the world. And it is here also that our sovereignty lies.