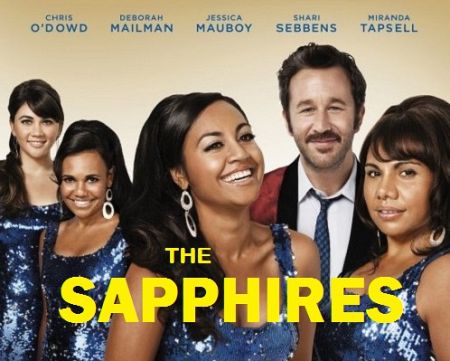 The Sapphires is the best Australian film thus far made, better even than Beneath Hill 60, Samson and Delilah, Snowtown, Newsfront, Breaker Morant, Not Suitable for Children and The Year My Voice Broke; and Wayne Blair our greatest auteur.

It gave us the joy of performance as never before — and, in Chris O’Dowd’s wonderful, stoic, share-misery, Irish roadie/accompanist Dave, the difficulties of the management of prima donnas who are blood-related and simmering with ancient family aches, in this case Julie (Jessica Mauboy), a pale-skinned Stolen Child who came back to her mother’s funeral and spoke of ‘you people’ in the accents of a white private school and later, coiffed and platinum like Kim Novak, sold tupperware. It’s not a destiny she chose, she icily declares, and is nonetheless punched in the face by her blacker sister Gail (Deborah Mailman).

Never has this national tragedy been more succinctly concentrated into a single foul sisterly quarrel in a tiny room. Tony Briggs’s and Keith Thompson’s dialogue leaps from this to that, from the local to the universal, from the insouciant to the moral, with the thrilling genial sarcasm of Bogart in Casablanca, and the joust between O’Dowd and Mailman has gleams of Tracy-Hepburn to it: the taming of the sulphurous termagant whom he calls ‘Mother Bear’ and then, very movingly, invites to dance, in daylight, on the bank of a river in Vietnam. We know so much so quickly, and we are reminded of the enormity of life, and the cruelty of fate, and the endless unguent of laughter with every exchange.

I could go on and on, but no description of it will prepare you for it. Go see it soon − or late if you like, it will run a year − with someone you love, or a stranger, or any racist of your acquaintance, for he will be changed by it.

The music is terrific also, in this best postcard to the future of 1968, my favourite year, yet made.