'How the Rajapaksa regime gets away with murder.'

It's the book that President Mahinda Rajapaksa and his corrupt and nepotistic cronies didn't want published.

When you read it, you will know why.

SRI LANKA’S SECRETS is a troubling dossier of the horrors and massacres perpetrated upon its own peoples by an absolute Government that masquerades as a democracy — a lie that is shamefully affirmed as truth by many expedient foreign governments, including Australia.

When the Rajapaksa government forces moved in for the 'final solution' to the Tamil Tiger problem, they first banned all foreign journalists, human rights monitors and UN observers.

Thinking themselves safe from outside scrutiny, they mass murdered tens of thousands of innocent civilians through bombardment from land and sea ... But truth will out ...

And so it has. SRI LANKA’S SECRETS is a courageous book and Trevor Grant a courageous journalist and refugee advocate.

In partnership with Monash University Publishing, Independent Australia's growing family of readers will be able to purchase SRI LANKA’S SECRETS from our online shop for a substantially reduced rate of $5 off the RRP of $29.95 — for $24.95 (with FREE POSTAGE for Australian readers).

Fittingly, SRI LANKA’S SECRETS is the first book to be sold in our online shop — the first of many we hope to bring to our readers.

Also, don’t miss the next story on IA, in which brave refugee advocate Victoria Martin-Iverson writes about confronting Crown Casino owner James Packer about his business dealings with the Rajapaksa regime and what she made him agree to.

In fact, don't miss any of the thought provoking articles and cartoons published every day of the week on Independent Australia and do us both a favour and sign up here for our complimentary must-read newsletter.

And no, the special offer for SRI LANKA’S SECRETS doesn't include a free set of steak knives!

The Sydney launch of SRI LANKA’S SECRETS is on Saturday 25 October at 3.30pm (for 4pm) at Gleebooks, 49 Glebe Point Road, Glebe. You may RSVP here. 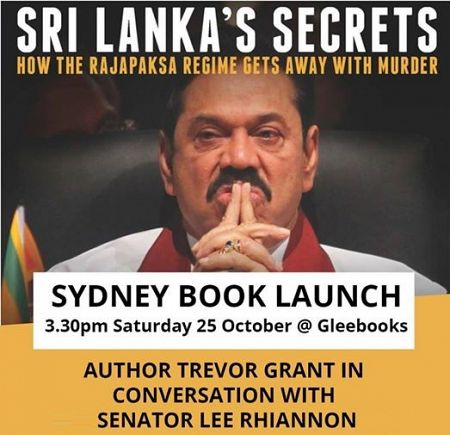