Shakespeare in Italy — in Adelaide

Australian literary legend Bob Ellis has a new play about the life of Shakespeare that goes on stage in Adelaide in a fortnight. Here he talks about his “case for the opposition”.


I BELIEVE De Vere wrote all the sonnets of Shakespeare and most of the better plays. The evidence is too overwhelming. And so does my collaborator, Denny Lawrence.

But we also thought the Stratford Man’s case is not implausible; and we asked ourselves: how might he have become, from such dim beginnings, so regally educated in the world’s ways and the manners of courtiers and kings by the age of 30, when Richard III came out, and how did he know so much about Italy? And we came up with this hypothetical.

He disappears from Stratford at age 20 after the twins, Hamnet and Judith, are born. He turns up in London as a jobbing actor and rewrite man in about 1589, when he is 26. He was almost certainly raised a secret Catholic in Warwickshire, a hive of priest-holes.

He sets thirteen plays in Italy, and none in Virginia, Moscow, Prague, Morocco, Madagascar or Tokyo.

This argues that he must have spent some time in Italy — the details of buildings and small town names and canals are so exact, between 1584 and 1589. And he may, plausibly, have been recruited there as a Catholic spy – as Marlowe was recruited as an Anglican spy – by the violently anti-Tudor Pope Sixtus the Fifth, the inventor of waterboarding, and given money, as Quadrant was by the CIA, to further his sonnet-writing career and report back what he found about his aristocratic friends and the Queen.

It’s not that we think this is true. We are both Oxfordians and think the obvious is true. But it is our case for the Loyal Opposition. 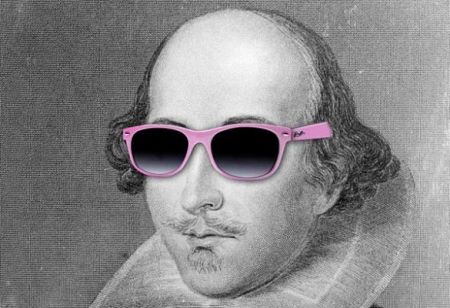 It is also proof that what the Bard did is not all that remarkable. So much of what he is said to have written are quotes from North’s Plutarch, or More’s Richard III, and so much, like Cymbeline, so really bad, that one wonders sometimes what the fuss is all about.

The Crucible is better than thirty-one of his plays. A Man for All Seasons better than thirty-three. Malory’s Morte d’Arthur has better language. Donne wrote better poetry. Dickens’ comic scenes are better than his. Sentence by sentence, Waugh and Nabokov write better English. Stoppard has a higher level of wit. Alan Bennett is more moving when it comes to the madness of kings.

So we thought we would both try to best him and explain the Stratford-yokel-made-good legend. It’s better than a lot of his work, be he De Vere or Shaxper, and its female lead, Julia, better than all of his.

Or this is my view. August 9, and the film we then make of it, will tell.’