Rodney E. Lever: The Fall of the House of Murdoch 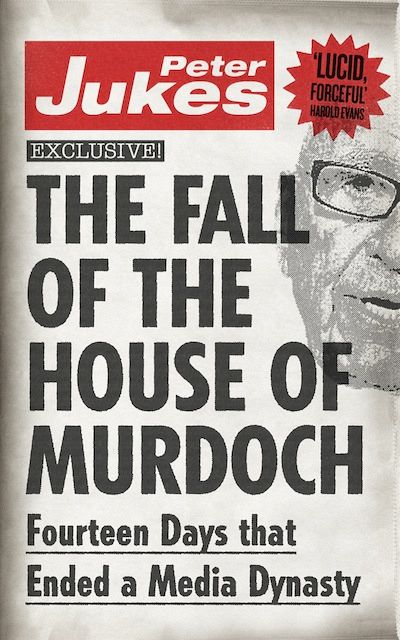 When Rupert Murdoch and I were growing up in the 1930s and 1940s there was one name on everybody’s lips: Adolf Hitler ― a man who seemed to have  appeared from nowhere and, by 1946, had completely disappeared, his remains buried under a concrete garage driveway near an obscure town in Siberia.

I never discussed Hitler or World War I with Rupert in the 20 years I worked for him. I had no particular reason to do so.

This week, a newly published book arrived for me in the mail from London. Its title, “The Fall of the House of Murdoch”  and its subtitle “Fourteen days that ended a dynasty.” The author is Peter Jukes, a contributor to prominent UK magazines and a writer and creator of several TV series for British television.

This book is not just a replay of  “Hackgate,” the unoriginal and trivialised name the media in the UK uses to describe the thousands of illegal acts that allowed the Murdoch newspapers to win their domination of the English market.

Rather, it is a frightening examination of the broader danger of how powerful media organisations can take control of our minds and, indeed, rule entire nations. When Adolf Hitler became chancellor of Germany in 1933, his first act was to confiscate all the German newspapers and radio stations and place them in the hands of his propaganda minister, Joseph Goebbels.

To reflect on this act is important in the age of Murdoch.

Winston Churchill, in his pre-war wilderness years, was the only prominent Briton to take Hitler seriously. Unable to interest the British daily newspapers in his writings on the subject of German rearmament, he offered his work to a Sunday newspaper: The News of the World.  The rest of Fleet Street simply ignored his reports about Hitler’s growing power.

Now The News of the World is gone, killed off by none other than Rupert Murdoch in what was supposed to be an act of contrition by him for the sins of those he had employed and who now were unemployed.

But in the 1930s, Winston had used the same paper much more wisely. From his personal sources in Europe and the British Foreign Office, he was able to alert the nation to German rearmament while Prime Minister Neville Chamberlain dithered and waved pieces of  diplomatic paper, assuring the country of Hitler’s promises of  “peace in our time.”

At the same time, much more was happening. In Italy and Spain, the fascist dictatorships of Franco and Mussolini were building their power under the totalitarian philosophy of government that glorifies the nation and assigns to the state control over every aspect of national life, including, of course, the media.

While this was going on, what was the young Rupert Murdoch doing? His mother told me that he spent much of his boyhood alone in his private cubby house in the gardens of the family's Mornington Peninsula home. He had no friends, other than his three sisters. But he read the papers that his father produced and he would have followed the build-up to war, just as I was doing elsewhere. Was he also brooding about his own possible future?

Certainly I was enthusiastic about the war news. Whenever I could get my hands on a Daily Telegraph or a Sydney Morning Herald, picking up discarded copies on the tram or the Manly ferry, I became aware of  Hitler’s treatment of the Jewish people and the rising hysteria in Europe.

Rupert’s mother was Jewish. Her family changed its name from Greenberg to Greene after they moved to Australia, early in the 20th century. In Jewish law, Rupert was also Jewish, under the “momser” rule.

In the first chapter of “The Fall of the House of Murdoch,” Peter Jukes brings to life again one of the great writers of  important English 20th century literature. In 1948, a former policeman and soldier named Eric Arthur Blair, who was wounded fighting in the Spanish Civil War, wrote a book (under the pseudonym “George Orwell”).  The original title was “Last Man in Europe.” At the last minute he changed it simply to “Nineteen Eighty-Four” and it became a literary classic.

Peter Jukes refers to Orwell’s novel as an extrapolation of the idea 'that controlling the news agenda was the way to control society' and outlined ways in  which lies could be turned into truth and truth into lies. In 1946, Orwell had written an essay declaring that intellectual liberty was under attack, even in the post-war years. Its enemies were the “apologists of totalitarianism” on one side and “monopoly and bureaucracy” on the other.

Any writer or journalist who wants to retain integrity finds himself thwarted by the general drift of society rather than by active persecution.

The sort of things that are working against him are the concentration of the press in the hands of a few rich men, the grip of monopoly on radio and the films, the unwillingness of the public to spend money on books, making it necessary for nearly every writer to earn part of his living by hackwork.'

In England, the immediate enemies of truthfulness and hence of freedom of thoughts are the press lords, the film magnates and the bureaucrats.

We’ll never know what Orwell would have made of Rupert Murdoch, a press lord and film magnate with the bureaucracy of News Corp under his sole control.

In this Peter Jukes is wrong. We do know! We learned it in 2003, when Murdoch used his world wide media power to report the nonsense about “weapons of mass destruction” in Iraq and help Blair, Bush and Howard achieve UN Security Council approval for one of the most wasteful and useless wars in history. The only winner was Murdoch himself, extending and cementing his personal power and influence.

What becomes clear, when Peter Jukes offers a forensic study of the Milly Dowler affair – the event that launched the first public outcry against the Murdoch papers – is the simple fact that phone hacking was a fact of life in England for at least 20 years before the 13-year-old girl disappeared.

Everybody in England must have been aware that phone hacking was being carried out at an industrial level, but nobody seemed to mind. For Rupert Murdoch to claim that he knew nothing about it is patently absurd.

The phone companies knew ― and did nothing about it. The government, the police,   debt collectors and the newspapers all hacked phones whenever they wished ― even though the Computer Misuse Act had become law in 1990 and provided for a maximum penalty of two years jail and offered no “public interest” defence.

The nation’s most powerful multi-newspaper owner must have been aware of the law, but did nothing to stop an illegal practice that caused embarrassment and shame to many people.

But what comes through, to the mind of the professional journalist, is the sheer incompetence at the management and editorial level of The News of the World, particularly the team who brought this embarrassment upon News Corp ―  Murdoch’s own son James, who was chief executive, the paper’s editor Rebekah Brooks and deputy editor Andy Coulson.

In short, the biggest selling newspaper in England was publishing a litany of facts that were never checked. They were blatant lies sold to the public as truth, sowing confusion that could only hinder the police investigation.

To any casual reader, the details of the messages [on Milly’s telephone] not only their content, timing and more importantly, the tone of the callers, indicate that these have been listened to by the journalist. It’s not even concealed. There is no suggestion of a police source. The News of the World, arrogating command of the investigation and trying to sell up a scoop, seems to know more about Milly than the police.

You can see very little public interest in terms of informing the public or helping the police. Instead there are several degrees of obfuscation and obstruction. this is not ground-breaking journalism. This is clumsy and bullying and covering of tracks. The News of the World journalists exercised their power, dissembling and diverting in order to conceal a much bigger story.

The long-awaited report from Judge Leveson’s Inquiry is now promised for release at the end of this month. The long delay is not unusual. The British government is facing a public trial ― just like the Murdoch employees are facing criminal trials in the courts of justice.

['The Fall of the House of Murdoch - fourteen days that ended a media dynasty', by Peter Jukes. Published  by UNBOUND.  (Available in Australia online from Booktopia.com.au.]