Cartoonists and Israel — the heinous slander

The calumnies perpetrated by cartoonists against the only democracy in the Middle East, surrounded by barbarous neighbours, increases daily, writes Evan Jones.

On 21 November 2012, the Melbourne Age’s Michael Leunig published a cartoon on Israel’s seemingly perennial victimisation of the Palestinian population: 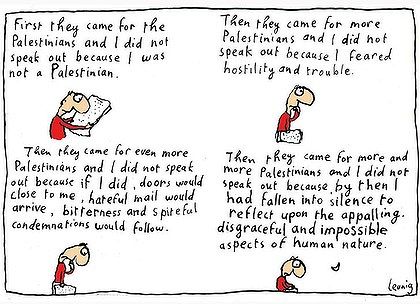 The occasion was Israel’s belated disciplining of an uncontrite Gaza, under its neo-Cast Lead Pillar of Cloud/Defence operation — to teach the cursed Hamas a lesson. There were some casualties — but, of course, all of them were militants.

Appropriately enough, the letters page of The Age ran hot with Leunig’s perfidy. There were even articles written as a follow-up.

It is not the first time that Leunig has broken the rules of decorum, of balance, and, indeed, of intelligence. Leunig has, indeed, been a serial offender (of which, more down the track).

The Melbourne pro-Israel community is, to put it mildly, fed up to the back teeth with the unreconstructed Leunig.

For instance, over eight years ago (how long has Leunig been at it?), Leunig fed us this ‘gem’:

Some journalists  ‒ including one from the usually steadfast Murdoch press ‒  appear to share the delusion: here, here and here.

Then there’s the ‘respected’ British leftie rags — the Guardian and the Independent.

And this last one rightly had a Guardian editorial apologising for hurt feelings:

Absurd! Although some journalists and academics appear to have somehow succumbed to the same delusion – here and here.

Here’s Dave Brown of The Independent during Operation Cast Lead:

Here’s Brown again the next day:

And here’s Martin Rowson from the Guardian, in 2010, vilifying Israel’s ongoing underpinning of the peace process against odds from a recalcitrant ‘partner’:

We refrain, for reasons of good taste, from reproducing Rowson’s disgusting take on Israel’s pursuit of Hezbollah terrorists, 19 July 2006, in which a blood-spattered boy is smashed by a gloved Israeli iron first.

Across the Atlantic, Mr Fish (Dwayne Booth) degrades the historic magazine Harper’s with his bile:

Tom Toles, Washington Post, 26 May 2006, ignores the fact that Judea and Samaria are an integral part of Eretz Israel, which G-d gave to his chosen people in perpetuity until the rapture: 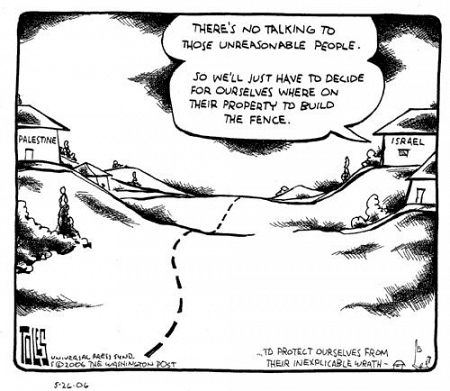 In South Africa, Zapiro joins the Independent’s Dave Brown in a scandalous butchery of then Prime Minister Ehud Olmert’s crushing of the Hezbollah offensive against sacrosanct borders:

Zapiro (Jonathan Shapiro, who is Jewish) has managed to offend everybody by his universally disrespectful cartoonery, so we are in good company by being dismayed and appalled.

Down under, Michael Leunig has blood brothers in other newspapers.

Geoff Pryor early blasphemes the foundational builder of the Israeli state – he who rid the promised land of its British oppressors – Menachem Begin:

Truth-telling is claimed as its opposite. Outrageous!

In the Australian Financial Review, of all places, where the Editorial and Opinion pages have long been kept under tight control:

Then we have Alan Moir in the Sydney Morning Herald implying Operation Cast Lead was driven by domestic politicking:

And a cartoon, apparently published in Syria and Saudi Arabia in June 2008 – by a cartoonist unknown – implies that US politics is in the pocket of the Israel lobby: 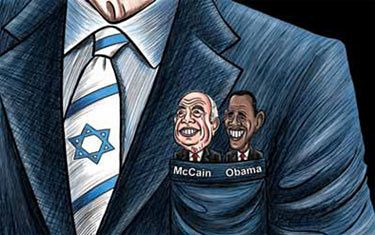 A preposterous claim, without a shred of empirical evidence.


‘At the heart of this ugly development is a new variety of anti-Semitism, aimed primarily not at the Jewish religion, and not at a purported Jewish race, but at the Jewish state. Zionism is now a dirty word in Britain, and opposition to Israel has become a fig leaf for a resurgence of the oldest hatred.’

The calumnies perpetrated by cartoonists against the only democracy in the Middle East, surrounded by barbarous neighbours, increase daily. It is a global phenomenon. There is no respite from it. How can we explain it? Are those who take up cartoonery (or as some friendly wit termed it, ‘toonerism’) genetically predisposed to the hatred of valiant Israel?

How has the stupendously resourced Hasbara enterprise failed to capitalise on selling the magnificent edifice that is the current state of Israel? We remain open to enlightenment on this fundamental vexing question, in which the future of our self-image is encapsulated.