SUBSCRIBE   DONATE LOGIN SHOP
SUBSCRIBE   DONATE
Wanted for Robodebt crimes: Morrison, Tudge, Robert and Co
The Commonwealth Bank's illusion of ethics
Why privatisation of the NBN would be a good thing
Get a Mark David T-shirt!
An elegy to masks and why mine stays on
Cartoons

CARTOON: The Mayor of San Juan 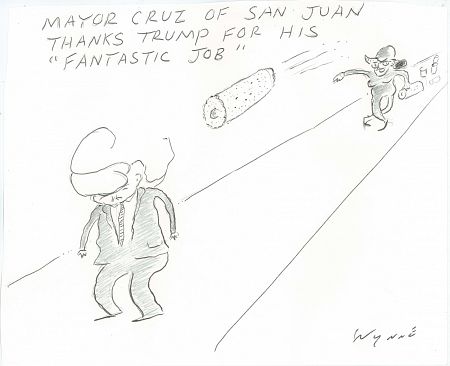 Never forget Donald Trump called the mayor of San Juan “nasty” when she begged for help after Hurricane Maria and he threw paper towels at the people of Puerto Rico when they needed more...

JUST IN: San Juan Mayor Carmen Yulín Cruz to President Trump: "You left us here to die ... now that number, 2,975 (deaths), will follow him wherever he goes for the rest of his life." pic.twitter.com/ntUuyRDgBI