Fairfax has outsourced Canberra Times book reviews to other Fairfax publications, but without informing its readers. Frank O’Shea reports. 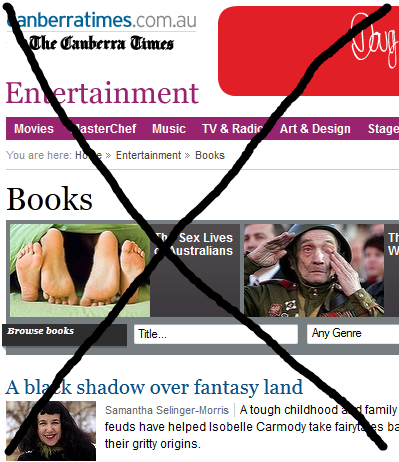 Some years ago, Fairfax took control of the Canberra Times, buying it from Rural Press. I understand that unlike the Sydney Morning Herald and The Age, it actually runs at a profit, but I am open to correction about that.

For many years, one of the outstanding features of the CT has been its Saturday book reviews. Unlike its new big sisters, it does actual reviews, not just puff pieces about authors in the guise of interviews. In yesterday’s edition, as well as a full page devoted to children’s books, nine titles are reviewed, each given between 600 and 1,200 words. These are proper reviews that develop a theme about a book, tell a reader what it is about, what the author’s style is, and whether the book is worth buying.

At a time when much public discourse in this country rarely gets beyond the level of rooftop bellowing, these pages remind us that there is a life of the mind and that Canberra, for all the criticism it gets, has people who appreciate literature. There are those who claim that the best book reviews in the country are found in the CT, but as one who is a regular reviewer, I except anything that I have written.

However, as part of the changes at Fairfax (it is very tempting to make a snide remark about fast food or iron ore, but for once I will control myself), the CT book pages are to be outsourced to Melbourne.

Now, here is the rub. We know about the outsourcing because the ABC and The Australian have told us. There has been no mention in the CT, none whatsoever. Not surprisingly, when people found out they wrote letters to the editor – I am personally aware of at least three who have done so – but none have been published. The understanding in Canberra is that a diktat went out that such letters were not to be published.

So much for a free press.