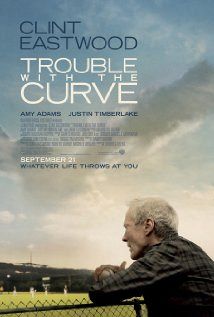 Clint Eastwood in his working eighties daunts and inspires us, again, with a rancorous old bastard showing younger men how to do the job and failing, of course, as a father, once again.

Gus Lobel is a talent scout for a big baseball team, going blind and concealing it. His daughter Mickey (Amy Adams), thirty-three and unmarried, is a hot-shot lawyer whose next big case may earn her a partnership. Pete Klein (John Goodman), his long-time workplace buddy, worried that Gus may be losing it, asks Mickey to spend a couple of days with him on the road. She does, imperilling her case and her career. During this time, and it extends to a week, she grills him on why he dumped her, twice, when she was six, for a year, on relatives, after her mother died, and at thirteen into a boarding school.

Eventually, we find out.

In the meantime she, a baseball freak too, helps monitor a fat young teenage egomaniac, Bo Gentry (Joe Massingill) who may be this year’s recruit, and resists the advances of Johnny Flanagan (Justin Timberlake), a rueful, talented former protege of Gus’s who, alas, went lame and recruits now for the Red Sox.

The film, like some other Eastwood offerings, is both unremarkable and special. In the usual roadside diners and redneck bars and anonymous motels, we experience, again, those unsettled ordinary Americans who never made it, or made it big, and are making do. We see the black underclass excluded, again, from advantage, and in one case (a water boy who pitches like an exocet) the stardom they deserve. We see Bills and Hillarys and Obamas failing, and find out why.

Clint’s usual mutinous Catholicism infects this film like the others – his protege Robert Lorenz directs it, and Randy Brown wrote it, but it is Clint’s yarn: winners, losers, Freudian wrangles, office rivals, unconfessed guilts and restless ghosts and altering tools of trade – and with clarity and mercy and a kind of carbuncled compassion shows us a better man than the mumbling buffoon with the empty chair at the Republican convention; he made this film and voted Romney, it’s a puzzle.

The underlying story, like Mystic River – and Catholicism, I suppose – involves child abuse, and it draws us into that fear all fathers of daughters undergo, and do not cease to fear with adulthood, and adds to what we might call an Electra genre that, in an age of divorce, is lately burgeoning. Fathers see less of their daughters now and some things are never sorted, and it’s a pity. Mickey resists Johnny, probably (they swim giggling in moonlight together but do not get naked) because she must first conquer Gus, her dad, and find his love, and explain his missing years, and that may take a while …

This is a fine film though not a great one, which fails nonetheless to explain why baseball is preferred by a billion people when cricket is available, and shows us unvarnished (it starts with Clint’s curses over his intermittent, uncertain, urine trickle) the softly advancing sorrows of old age.