Director Joe Wright made a mistake in filming Anna Karenina like a play, says Bob Ellis, although the result was still extremely good. 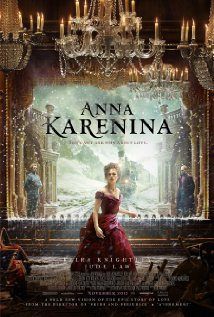 IT MAY have been Stoppard who beguiled Joe Wright into filming Anna Karenina like a play; or a half-play-half-movie in the vaudeville-pier-end style of Oh What A Lovely War. Or it may have been Joe in an ego-tempest of self-love attempting to upstage Tolstoy as Baz and Benedict and Barrie do with Shakespeare on this faraway, fatal shore every year or so.

It was a bad idea, and I nearly left, but was glad I stayed.

For it was, in most other, regards near perfect. There will never be as good an Anna as Knightley, nor as exquisite a widow’s black veil through which she beweeps with large, brimming eyes her outcast state. Nor as great, truly great, a Karenin as Jude Law: bearded, wispy-bald, pale-eyed, spectacled, pious, punishing, self-punishing, racked with guilt and unstifled love and puritan resentment of that love, he inhabits the role with the moral force of a Smoktunovsky or Scofield or Spacey. There will be no better reading, I think, of this role ever, nor better dialogue, cutting like a shark’s fin through the story’s dark waters, showing what adultery was then, and the cost of it; and aristocracy; and duty; and the burden of one’s good name. In the doleful red-headed Levin (Domhnall Gleeson) we see hints of Chekhov’s Astrov, a sympathiser with the serfs, scything hay beside them and forfending like Lenin the end of everything.

Aaron Taylor-Johnson’s Count Vronsky, Anna’s impetuous high-born lover, is a bit of a worry. He seems too insipid, shallow, youthful and narcissistic to pierce through Anna’s marital carapace so readily — but such men do, I guess, and have. For me, the role belonged to Dan Stevens of Downton Abbey, but what would I know. He is a fine actor, though, and that vital thing, his Russianness, is not in doubt.

The costumes are excellent; the lighting and angles very, very good; the walk-ons (Emily Watson; Alicia Vikander; Olivia Williams; David Wilmot; Tannishtha Chatterjee; Matthew Macfadyen as a jesting, Rumpolish Oblonsky) always unimpeachably fine, every one of them. But …

But it works, in an odd way. And you come out purged and wiser, as Aristotle recommended. And although the ‘auteur’ (what a silly concept that is on this particular occasion) has loftily sacrificed box office takings of somewhere north of six hundred million dollars, preferring twenty or thirty, he got his way.

Or Tom did. And the set designer had a ball.