Bob Ellis on the Bryce Courtenay he knew

In by no means a hagiography, Bob Ellis writes that he met Bryce Courtenay in 1962, was fired by him, and had complicated feelings about him. 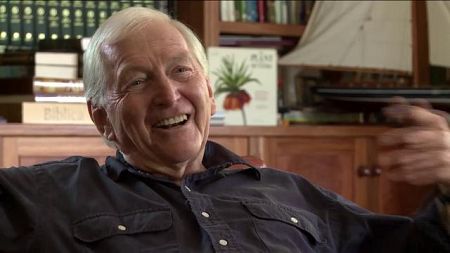 I MET Bryce Courtenay in 1962 and knew him fairly well for a while and I have complicated feelings about him, as many do, or so I am told.

It would be fair to say that he was a tremendous phoney with a very irritating personality whose commercial success erupted when he, an advertising man, and a good one, learned how to market himself as a product. You could buy his books at Woolworths, and he was the first writer to try this on; and he became not so much a name as a brand name, and a Christmas gift the underinformed would give to their relatives who, not having read a book since high school, would gulp down on Boxing Day out of gratitude, family feeling and curiosity.

He was a strange man. He once, when very drunk, offered me the Ambassadorship to the Philippines, something he seemed to think was within his gift, and a good idea, though I had no interest in it then and none since. And he kept on insisting I take it principally because he’d thought of it. He worried at the idea, like a dog at a bone, and drank and drank and drank, repeating himself past midnight with rising enthusiasm.

I’m sure other people will have similar stories about him. He, Bruce Beresford, Jim Sharman, Sandy Harbutt, Vic Nicolson and I were at Hansen Rubensohn-McCann Erikson in Caltex House, when it was Sydney’s tallest building, at the same time, 1962-63, and Bryce, the creative director, was not that much like Don Draper, but he did, like Don, parade his stream of consciousness in a beaming, forceful, charismatic way. He had a pipe and a blond cowlick and a handsome, chiselled profile like the man in the Pelaco ads and pink shirts as good as Gatsby’s and he seemed to me, and to Bruce and Jim, entirely prefabricated and, well, phoney. He would tell impactful H. Rider Haggard-style stories of adventures in Africa (‘There was a man sitting up in the burnt jeep and, let me tell you, Bruce, he was very, very dead’) which he convinced us, or some of us, were true and came to believe were true himself, I guess, after a case of whisky or two.

An interview with him on the ABC’s Conversation Hour was just replayed at 3 a.m., and it is hard to find any sentence of it which was not, in some part, fiction. A morning when there were two sunrises and he cradled his AIDS afflicted son in his arms and sang ‘Summertime’ to him until he died (and he sang the whole song unaccompanied emphatically and embarrassingly as part of the interview) may well have been true but was as excruciating in performance as Nicole singing ‘Somewhere Over the Rainbow’ to the little Aboriginal boy in Baz’s Australia. I read one of his books once, Tommo & Hawk, because Bob Carr had to launch it and I was writing his speech, and I found it a maddening mixture. He did action well and a section of it, about whaling, was as good as, not Melville, not Conrad, but James A Michener. And there was other, character, stuff that was really embarrassing ― and some of the worst dialogue in human memory.

It didn’t worry his readership, because they read little else ― in the same way as most Andrew Lloyd Weber audiences go, once a year, to his work or its revivals, and almost no-one else’s – but it sure as hell worried me. I formed the view that if you merely say you are great – like Baz, Kosky, Weir – in their interviews and colour supplements, enough of a population will believe you to make your fortune in ramshackle, glued-together colonies like Australia.

I’m sure he felt more displaced than many, and made up stories about his past as other such people out of their depth and their latitude ― like J Gatsby or Don Draper do. He really shocked me when he revealed that Colgate toothpaste did not in fact achieve ‘round-the-clock’ prevention of dental decay. ‘We just say that,’ he said. ‘It’s what we say.’ He gave me The Hidden Persuaders and Confessions of an Advertising Man and urged me to write novels, as he intended to do, ‘to upgrade the image of the advertising industry’.

He had a good effect on many lives. People who had no interest in Australian history became, after The Potato Factory, obsessed by it. And they passed on his work to their friends and got, like J.K. Rowling, an underclass reading that may not else have taken it up.

He believed in the magical effects of reading, and in speech after speech would proselytise them with zeal and conviction.

‘Read to your children,’ he would say. ‘Get them reading early, at seven, at six, the way we read as children. Get them into the habit of reading. And if we do this, there will be fewer school dropouts, less drug addiction, less alcoholism, less wife-beating, less divorce, less suicide, less murder. It is the panacea. It is the elixir. It cannot be replaced.’

Or words to that effect. I will forgive him a good deal for these influential significant wise words. Even, I guess, for firing me, the first of my employers to do so, but not by any means the last.

He was a one-off, a curiousity, a kind of alien, whose net effect was positive, I guess, and his achievement, if that is the right word, remarkable.