Bob Ellis gives 'I Give It a Year' a big tick

Romantic comedy I Give It a Year is love in all its contours and colourings and fumblings, writes Bob Ellis, and should be seen. 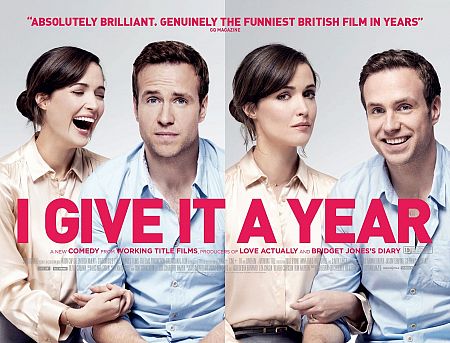 IT IS OBVIOUS NOW, though it was not at the time, that Richard Curtis invented a new genre when he wrote Four Weddings and a Funeral. Like PG Wodehouse, it involved the idle rich in ‘musical comedies without the songs’. Like Seinfeld, it emphasised the small social embarrassments that, emphasised, changed lives. Like most of the films of the late forties, it had American women marrying Englishmen. It had a lot of sex, but no visible children, or abortions, as a result of it. It always involved Christmas (the Capra touch) and running for airports (the Ephron touch) and potty-mouthed male drunken klutzes, and quarrels over what was correct and good behaviour.

And, most of all, it glamorised London, in the same way as Roman Holiday and its countless successors glamorised Rome as a gorgeous, easy city full of beautiful, crazy people. Notting Hill was like this, Bridget Jones’ Diary and, of course, the greatest romcom ever, Love, Actually. And the first such Curtis-free London romcom, Dan Mazer’s I Give It a Year, is now upon us. And it’s very close to being the best.

It stars Rafe Spall, the Shakespeare of Anonymous; Rose Byrne, who played the gorgeous Breisias in Troy*; Simon Baker, the chief villain of Margin Call; Minnie Driver, the hellcat wife of Barney’s Version, Jane Asher, the frigid wife of Brideshead Revisited, Stephen Merchant, the demented agent of Extras, and Anna Faris, a genial slut from Entourage.

The story, of a too-fast-married couple discovering their differences outweigh, eventually, the hot sex they both enjoy, is managed in flashbacks from a session with a marriage counsellor crazier than anyone else in the film, who plays with sexually explicit dolls and accuses Josh (Spall) first up within thirty seconds of being a closet gay. The flashbacks show Josh is still keen, very keen, on his old love Chloe (Faris), the world-reforming greenie who went off to Africa to mitigate a plague and never quite broke off with him, and Nat (Byrne) is very attracted to Guy (Baker), a smooth and gracious capitalist ‒ Oxford-educated, American-born ‒ she is organising a campaign for, taking off her wedding ring to flirt with him and improve her company’s bottom line. A scene where he woos her, involving oysters, a violinist and endangered white doves, is as good as anything by Lubitsch.

It all turns on the curious fact, well noted by Sydney mothers in World War 2, that Americans have better manners than other people, and there is nothing worse than a young Englishman, uncertain of his class, trying to be funny. Stephen Merchant has form in this, and as Danny the Best Man gives a wedding speech fouler than any I have witnessed in a crowded field in my seventy years, and Josh at Charades wrecks two family Christmases on the trot.

Wonderfully, Mazer manages not to turn us altogether against Josh. Though a social catastrophe after two beers, he is kind, and loyal, and perceptive, and trying to make it work. Rose Byrne is very, very fine as a beautiful liar coping with adulterous yearnings and marital dismay, and she and Baker, who is attractive beyond all human probability and an actor of the first rank, should do a Rock Hudson-Doris Day series together and so bring some tax dollars home to Australia.

This film is very fine and will overtake all records as a Christmas DVD. It is love in all its contours and colourings and fumblings, and it should be seen.