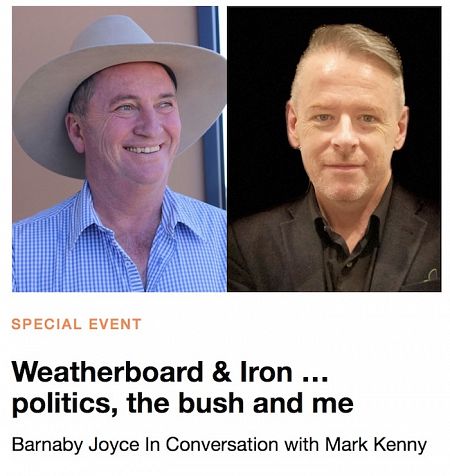 If you visit the website of this year’s Canberra Writers Festival you will find the headline event is former Deputy Prime Minister 'Barnaby Joyce In Conversation with [Fairfax journalist] Mark Kenny'.

The description of the event is as follows:

'In this a not-to-be-missed event, former Deputy Prime Minister Barnaby Joyce will riff about life on the land and discuss his ode to the bush, 'Weatherboard & Iron'. In what promises to be a spirited session with senior Press Gallery reporter Mark Kenny, Joyce will also discuss the big issues confronting Australia — and provide a rare insight into the controversies that have plagued his recent career.'

Or, as Andrew Stafford put it in this Tweet:

Oh I see Barnaby Joyce is continuing his national Leave Me Alone tour at the Canberra Writers Festival https://t.co/oT9A1WmuGo

There is, it seems, no limit to the ways in which morally grubby, less than mediocre, allegedly corrupt white male politicians can be lauded and rewarded in Canberra. You have to concede, though, that giving such a man top billing at a writers’ festival is, forgive the pun, novel.

The Festival’s theme is 'Power, Politics and Passion' and seems to have been purpose-made for the rehabilitation of Joyce. Many of the journalists who apparently conspired to keep Joyce out of the news during the New England by-election are also participating in the festival, which could more accurately be titled, Canberra Journalists and Politicians Festival, so top-heavy is the program with both.

It seems to have escaped the notice of Festival organisers that experience of and insight into passion, power and politics is not confined to the political class and that there are many Australian writers who address these core themes in their work. These writers are, inexplicably, absent from this festival, perhaps because they are neither journalists nor politicians.

Instead, you will find on the program, events such as the 'Good Kenny, Bad Kenny', feature, in which Buzzfeed journalist Alice Workman referees an encounter between News Corp’s Chris Kenny (presumably the bad one) and the same Mark Kenny who converses with Joyce.

There’s The Australian’s 'Greg Sheridan In Conversation with [political journalist] Paul Bongiorno' on the topic, 'God is good for you'.

And there’s more if you care to check out the program. There are also two hours given over to Indigenous poets, which is remarkably little, considering that if any demographic in Australia knows everything there is to know about the workings of power and politics, it’s Indigenous Australians — and there are many among them who could most adequately participate in this festival, had they been invited. However, the participants are overwhelmingly white.

In what can be interpreted as incomprehensibly lazy and unimaginative programming, Festival organisers have apparently excluded writers such as Alexis Wright, who won the 2018 Stella Prize for her book Tracker: Stories of Tracker Tilmouth — an account of passion, politics and power, if ever there was one.

Richard Flanagan always has an interesting and complex take on the topic as well — perhaps he was busy.

Then there’s Bruce Pascoe, whose award-winning book Dark Emu – which has recently been adapted for performance by the Bangarra Dance Company – challenges white stereotypes of Aboriginal culture pre-invasion.

Instead, we have the same tribe that appears in rotation every Sunday morning on the set of Barrie Cassidy’s Insiders. We have the politicians and journalists who already have the biggest platforms available to man (sic) in this country, given a writers’ festival tailor-made for them to strut their stuff, yet again.

We literally have the "insiders".

And we have Barnaby Joyce headlining the entire production.

It is discouraging and sad that the Canberra Writers Festival could not find anyone other than Joyce to headline the event. One has to ask, why are the organisers of the Festival complicit in what is obviously an attempt to rehabilitate a disgraced Coalition politician?

Why is Joyce being rewarded in this way, legitimised by a literary platform, given yet another opportunity to propagate his narrative?

Or is the Canberra Writers Festival now just scouring the gutters for click bait?

The Weatherboard 9. It'll cost you $90 to see Barnyard Choice at the #NPC as part of the Canberra Writers Festival. Profiteering with his book from his bumbling misadventures. Bizarre. #auspol https://t.co/EvVpv71Wtr. #auspol pic.twitter.com/wVE0WrKFIQ