Will Bill Shorten understand the energy consumer must be king?

By 2030, it will be pretty clear that new-build wind and solar energy will win the technology battle over new-build coal, gas, or even nuclear. If Shorten wins next year's election, it will send a clear warning to ageing coal generators that their time is over, writes RenewEconomy's Giles Parkinson.

SO THE battle lines have been set. Labor has adopted the 50-50 path to 2030 (50 per cent renewables and 50 per cent fossil fuels), arguing that a transition to clean energy is necessary and that consumers will actually benefit from cost reductions. The Coalition (and the Murdoch media) has responded by entrenching itself in price scare mode.

The fact that Labor has announced a 50 per cent target is terrific news. Should they get into power, it will mean a long-term policy setting, a clear signal for the renewable energy industry to invest, and a clear warning to many ageing coal generators that their time is over.

Analysts are crunching the numbers on how such a 50 per cent renewable energy target could be made up. Ric Brazzale, of Green Energy Trading, says it would require another 14,000MW of large-scale renewable energy to be built between 2020 and 2030.

Labor on the road to an election victory with decision to go 50% renewable energy by 2030. #Auspol pic.twitter.com/T7UNVS2XVh

Analysts suggest that more than half of this would likely be large-scale solar, possibly including solar tower and storage, and may be even some wave energy, and possibly some geothermal. And it won’t cost much.

But for the Labor Party to meet its target it will depend significantly on energy consumers – the households and the businesses – to continue to install rooftop solar and battery storage at significant rates.

Brazzale estimates that the amount of rooftop solar needed to meet that target will be more than 16GW, four times the amount already installed on the nation’s households and rooftops.

But private forecasts suggest the level of household PV could be much higher.

Bloomberg New Energy Finance believes that there will be 37GW of rooftop solar in Australia by 2040. In a recent publication, it suggested that rooftop solar – both on households and on large warehouse type buildings – would help push Australia’s renewable share to 37 per cent by 2030, even in current settings. By which time there would already be more than 21GW of rooftop solar.

Gordon Weiss, of consultancy Energetics, last week presented the below forecast on the level of solar PV out towards 2040. It was based on data and forecasts from the Australian Energy Markets Operator, but it is equally optimistic, with more than 20GW of rooftop solar by 2030. 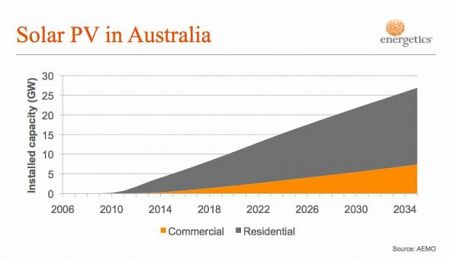 But these forecasts – or in the case of Labor, targets – are only going to be achieved if the playing field is not tilted against consumers by reactionary moves by incumbent utilities and pricing regulators (and the Murdoch media). The raising of fixed prices, and the attempts to saddle solar households with added costs, is a taste of what may follow.

This presents a fascinating conundrum that will demand a careful response from federal leaders such as Shorten, and his state counterparts.

For the past few decades, energy consumers have been forced to take whatever the industry has chosen to given them – mostly coal-fired power at a cost that exceeds that of just about any other country. Energy that is delivered by a large, single directional and largely dumb grid.

That is changing rapidly. Consumers – both consumers and households – can produce their own power, and they can store it. What’s more, numerous studies show they can already do that at a lower cost than the grid. A few more cost cuts, they might even be able to do it without the grid.

A report from Bloomberg New Energy Finance last week showed that a 4kW solar systems with 5kWh of storage costs less than grid power. A new battery offering from LG Chem brings this down even further.

As we reported in yesterday’s story on our sister site, One Step Off The Grid, the costs of combining a 5kW rooftop solar system and a 6.4kWh large battery storage array, with a 5kW inverter, are already down to around 18c/kWh. And this is at the quality end of the market.

That poses huge challenges: for consumers trying to get their mind around the technology, for incumbent utilities wondering what the hell it means for their business model, and policy makers and regulators on what to do about it.

But change is definitely needed. The current energy market is based on old systems of centralised technology and centralised thinking. The business models that dominate today were based largely around gilding the lily.

Networks were incentivised to build big networks, lock in double-digit returns for that investment and send the bill to the consumers. Those costs now account for nearly half the bill in most states and provide most of the incentive for consumers to produce and store their own energy.

The generation fleet were just as guilty, encouraging consumers to consume as much as they can, particularly in peak periods, while the generators cashed in on those demand surges when prices soared to $12,000/MWh.

The generators obtained 25 per cent of their annual revenue from just 36 hours of such events a year. The retailers were happy to cash in and send out bills with a handsome “retail margin”.

Bill Shorten appears to recognise the change that is happening. He speaks of the opportunities of rooftop solar and battery storage, but it is important to note these will only be deployed at scale if the walls surrounding the incumbents are removed by regulators. The incumbents need incentives to change, not remain the same.

In the EU, there is a fascinating debate about how the energy system should be redesigned. The EU is currently considering several proposals, but the bottom line is this:

“Market rules need to be updated to the reality of a much more decentralised system where renewables and the consumer are king.”

That requires reform at the retail level and in the wholesale markets. The retail reform is the critical one for the likes of Shorten to ensure that distributed generation – solar and storage – deliver the cost savings that they promise, without shoring up the sunk investments of network operators and utilities.

But increasingly, the lines between the retail markets and the wholesale markets will blur. New smart software is allowing consumers not just to trade amongst themselves and share their output – if the rules allow – but also to engage with the wholesale market.

On the wholesale market, a lot of work needs to be done. Right now, the absence of a carbon price, and efficiency standards means that there is little to drive polluting coal-fired power stations out of the market.

Australia has a huge amount of coal capacity, much of it paid for or subsidised by governments, that has been fully depreciated and produces at a low marginal cost. Somehow, those coal-fired generators need to be forced out.

It was interesting to see the energy incumbent’s lobby group, the ESAA, warning of higher prices from an elevated renewable energy target, an argument gleefully picked up by the Coalition.

The ESAA argues that while a 30 per cent target by 2030 would – according to the Coalition’s own RET review – lead to a lowering of wholesale prices, this would only be temporary. A 50 per cent target would force so much extra capacity, there would be no price signal for wholesale generation.

It even lamented the closure of the two coal generators in South Australia, forced out by wind and solar, which now accounts for 40 per cent of that state’s electricity demand.

But this is what is supposed to happen. Short of artificially extending the life of the existing generators, which no one would contemplate unless they completely ignored climate change, Australia’s coal fleet will gradually be closed down over the next 10-20 years.

Even without a renewable energy target, that would force wholesale prices to rise. That means that by 2030, or even before, the grid will need new capacity. And when that happens, new-build wind and solar energy will be competing against new-build coal, gas, or even nuclear. It is pretty clear which technology is going to win that battle.

This story was originally published in RenewEconomy on 23/7/15 and has been republished with permission.

Keep an eye on the COALition. Subscribe to IA for just $5.