Turnbull’s abject capitulation to the coal lobby is now complete

By maintaining the archaic Liddell power plant Malcolm Turnbull is only appeasing the fuel lobby and the right wing of the COALition — everyone else, even AGL, is against it, writes Giles Parkinson.

THE KINDEST thing to say about Prime Minister Malcolm Turnbull’s absurd proposal to extend the life of the country’s oldest coal generator is that he is playing politics.

Certainly, there is no other reason to ask that AGL Energy to stick a band-aid on what will be a 50-year-old and increasingly decrepit coal generator on the basis that it will lead to increased security and lower prices.

The very idea was mocked by AGL CEO Andy Vesey, a man who is making a motza right now from operating the country’s biggest coal fleet:

Not only did AGL not want it, the organisation whose job it is to keep the lights on, the Australian Energy Market Operator (AEMO), made it clear it was not needed: there are smarter ways to achieve energy security.

Despite what you may read in the Murdoch media and hear on the ABC, AEMO is not recommending that the life of existing coal generators be extended, least of all the oldest and possibly least reliable in the grid.

It’s an option, but AEMO’s clear preference is to do the one thing that the Coalition refuses to do — come up with an ambitious national plan for more renewables, embrace the modernisation of the grid and accelerate the uptake of new technologies like storage, smart software and demand management.

Pointedly, AEMO’s scenario planning made clear that with a coordinated plan to install more renewables – to a level of 45 per cent by 2030 (the level that the Coalition thinks is reckless) – would significantly reduce the risk of outages. More investment in fast responding “dispatchable” capacity would eliminate it.

In its report to the Turnbull Government, AEMO says it is indifferent as to which technology makes up the loss of large generators, but makes clear:

Indeed, the only people who think that extending the life of Liddell might be a good idea – apart from the Tomago Smelter – are the coal lobby and the right wing of the Coalition — both of whom have lost all perspective on the issue of climate and energy.

Turnbull tells Minerals Council he would welcome a new 'clean coal' plant... does he know they're not clean? https://t.co/ROkthEfTeL

And Turnbull – the man who would not lead a party that did not take climate change seriously, the man who spoke so enthusiastically of the “exciting” energy revolution – doesn’t have the gumption to disagree publicly with either of them.

Turnbull should understand this and his own preference may be something like Snowy Hydro 2. The AEMO reports provided him with the opportunity to seize the “innovation” he once supported — and the new technologies.

But his political needs are to appease the right-wing of his party and to do that he has to play the role of string puppet to the fossil fuel lobby, in the shape of the Minerals Council of Australia.

The best he could offer that lobby was to ask that – in the name of energy security – an increasingly unreliable generator, which lost half of its capacity at the height of last summer’s heatwave and only operated half the time during the last financial year, be kept open for another five years beyond 2022.

Liddell is probably the last thing a market operator would want to turn to in a crisis. It is slow, unreliable and would require huge amounts of investment and no match for flexible distributed energy, and behind the meter technology that can support renewables.

It is important to note that AEMO makes it clear that there is no breach of Australia’s strict energy reliability standards by the retirement of Liddell, and any increased risk will be mitigated by more wind and solar, particularly if it comes as part of a national renewable strategy.

Indeed, under the AEMO scenarios, the only breach to standard to the NSW grid was if another big coal generator made an unexpected exit at the same time. That could happen, but not with a coordinated approach to the issue of solving the issue of dispatchable generation – and “dispatchable” does not mean baseload. 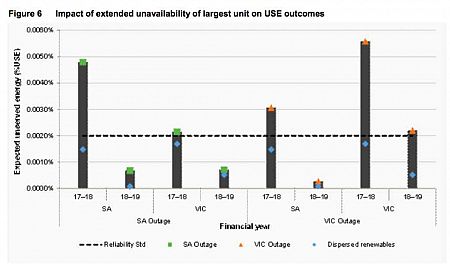 And the biggest risk to any state is the sudden failure of their biggest unit – a coal or a gas plant – and based on their performance last summer, that is a very real risk – hence the push by AEMO to get more wind and solar built, and more storage, demand management and other smart technologies in place.

As Vesey underlined, it doesn’t even make any economic sense to keep Liddell open. The cost of the refurbishments needed would be prohibitive. Bloomberg New Energy Finance suggests that the cost of wind and solar will beat refurbished coal by Liddell’s planned closure date.

By 2032, solar should beat incumbent coal. It shouldn’t be that hard to work out what the cheapest way of reducing electricity prices is. It is certainly not through new or refurbished coal plants. 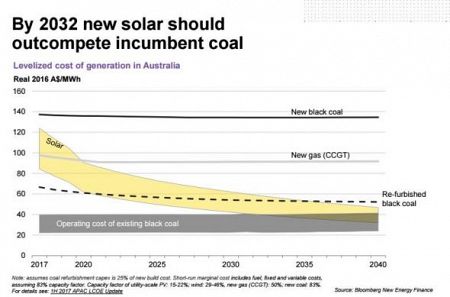 The push for Liddell came on the same day as the Minerals Council produced a report arguing the very same point.

That appeared in The Australian, alongside leaked excerpts from AEMO’s special report into dispatchable energy needs that the Government chose to sit on while it launched its improbable attempt to ignore AEMO’s plea to embrace 21st-century technologies and flick the switch to the past.

Choosing to play politics with federal and state Labor, Turnbull, energy minister Josh Frydenberg and his predecessor Greg Hunt all issued a series of extraordinary attacks during Question Time on Tuesday, focused on Labor’s lack of enthusiasm for coal.

And they all ignored the central themes of the AEMO annual report on energy opportunities and requirement, which was being released at the very same time:

Namely that this energy revolution has to be managed by smart technologies; the system needs more wind and solar, more storage, more dispatchable and flexible generation, and more demand management and other demand-side initiatives, such as energy efficiency and behind the meter solar, storage, and smart controls.

What it does not need or want to do is put all its eggs in a basket called dirty and ageing coal generators. The report could not make it any clearer that the biggest risk to supplies in the coming summer and future years is the sudden loss of capacity from unreliable generators.

Liddell could not be counted on in last summer’s heat wave and numerous other generators also failed in the heat at various times, including some of the most modern gas generators.

This is not good enough for the Far Right, with former minister Matt Canavan blaming the “green agenda”, including, laughably, AGL, for the push to replace coal. Like every other policy proposed by the Coalition for the last four years, Canavan’s plan would result in a more unreliable and more expensive grid.

This, sadly, is the big dilemma for AEMO’s boss Audrey Zibelman. She is trying to devise a strategy to overcome the big risks of this summer and the use of smart technologies, like demand management, battery storage, and redesigning energy markets plays a critical role in this.

But she knows what she is up against and that if AEMO puts a step wrong – or more blackouts and load shedding takes place over the coming months – then her ability to push the country towards a clean energy future will be threatened by the howls of the technology neanderthals.

And so many people with vested interests are not wishing her well. AEMO’s biggest challenge is going to be the sudden and often unexplained loss of capacity at critical times. Hence her push for a “strategic reserve”, which does not actually mean more diesel and gas generators, but could be battery storage and demand management.

Right now, however, all the politicians are achieving is to scare the consumer.

At the Disruption and the Energy Industry conference on Wednesday, one participant said how his mother had rung to ask if she should buy a generator as back-up.

'... point scoring exercise that has cost customers like us a lot of money.'

It is simply not good enough, and Turnbull has made been made to look a fool.

The Turnbull Government has run out of energy https://t.co/h0E8NzNDOV @IndependentAus