Tony Abbott's ignorance and the Coalition's war on renewables

It's been another big week for exciting renewable energy technology developments and dismal energy politics. Here is a wrap of how conservative politicians and commentators continue to ignore the reality and how business is finally embracing it.

Tony Abbott has a great sense of timing

It was only on Tuesday (19 September) that Tony Abbott – the former prime minister and leader of the opposition within the governing Coalition – boldly claimed:

"You can’t run a steel plant on renewables, you can’t run an aluminium smelter on renewables and if we want to keep all of these heavy industries we have got to have reliable baseload power, and the only way you can do that is with coal, or with a gas."

Cue the owner of the biggest steel plants both in the UK and now in Australia, the billionaire businessman Sanjeev Gupta, who declared the very next day that you can run a steel plant on renewables and that is exactly what he intends to do, with solar, wind, pumped hydro, battery storage and some co-generation.

What’s more, it will probably cost him one-third less to do it that way.

Gupta, having bought the ageing steel plant in Whyalla – the city that Abbott said would be turned into a ghost town by carbon pricing and renewables – has now struck a joint venture with Ross Garnaut’s Zen Energy. The venture is a bold vision to build renewables all over the place – particularly for large industrial users – and usher in a green energy industrial revolution, that Abbott says he will cross the floor of the house to try to stop.

And other big energy users are following suit. Zinc refiner Sun Metals and Telstra are investing in large-scale solar, and Nectar Farms is going to use wind and battery storage to power what will be Australia’s biggest greenhouse for vegetables. Even Brisbane Airport is putting in 6MW of mostly rooftop solar.

But for all Abbott’s ignorance and stubbornness about energy – and his determination to stop the future – there is actually no discernible difference between what he says about energy and that of the remainder of the Coalition, which hasn’t touched his climate and energy policies since he was turfed from office two years ago.

In Victoria, Leader of the Opposition Matthew Guy vows to tear down Labor’s 40 per cent renewable energy target — the legislation for which passed the lower house this week.

In Queensland, Tim Nicholls, the head of the Liberal National Party (LNP), says if he wins power in the State poll next year he will also tear up Labor’s renewables plan and vows to directly fund a new coal-fired generator in north Queensland.

That idea got the full support of Prime Minister Malcolm Turnbull, who says such a plan could probably get funding from the Federal Government’s $5 billion Northern Australian Infrastructure Facility.

Turnbull said on radio 4BC:

I’ve been talking to Tim Nicholls, who I hope will be the next premier of Queensland, about the potential for a new advanced high-efficient low-emission power station.

Obviously there is a substantial amount of funds in our Northern Australia Infrastructure Fund, that is available for infrastructure. A power station ticks that box. It is definitely infrastructure.

What did Barnaby Joyce just say?

And there was Deputy Prime Minister Barnaby Joyce, also up in Queensland calling for a “coal-fired” worker’s utopia, and – not for the first time in the past week – seemingly very upset at the prospect of being stuck in a lift, busting for a pee.

He was on the Sunshine Coast predicting “absolute chaos” in Queensland this January, forgetting maybe that the State has no large-scale renewables in place yet (a lot are being built) and this summer will rely almost entirely on coal-fired generation, of which it has plenty.

That means the lifts stop and if you’re in a lift you’ll be stuck there for a while. The operations at the hospital will stop. That means the traffic will go into total gridlock. There will be absolute chaos.

.@Barnaby_Joyce rails against the 'religion of renewables'. #abc730 #auspol pic.twitter.com/i3lIDN8JPz

So many questions to ask, particularly about the traffic and its links to electricity. But anyway, Barnaby, if you can’t rely on the youngest fleet of coal-fired generators in the country, with excess capacity, what can you rely on? Better carry an empty bottle.

The Australian’s war on renewables is just silly and misinformed

There is no doubt that the Coalition politicians seem to rely upon – and are egged on by – the horrible misinformation in the Murdoch press.

The Australian has been running up a head of steam in the past few weeks, provoking those howls of outrage from Abbott and his mates in the right wing don’t-think tanks, through a series of articles that grossly inflate the level of subsidies to large-scale wind and solar farms.

Economics writer Adam Creighton got the ball rolling, with a figure of $45 billion of subsidies from the renewable energy target, ignoring or unaware that nearly all wind and solar farms are signing contracts that attribute no value to the certificates they will own. Hence, little or no subsidy.

He followed it up a week later with a similar story about a solar farm in Moree owned by a Saudi billionaire. But it wasn’t until David Crowe repeated the same story – and linked the billionaire’s son with the singer, Rihanna – that it got to be the front page lead.

Alas, both stories were hopelessly wrong, because Crowe was also unaware that Moree had signed a contract with Origin Energy that has given away the certificates for free.

Crowe has tried to row back on the story in several attempts – including an effort to turn this error into yet another “exclusive” and announce that the solar farm had, in fact, signed a PPA – an event reported in his own paper 18 months earlier.

But the fundamental point was ignored. The Moree solar farm – like nearly every other new wind and solar farm – will deliver electricity to consumers at a far lower price than the average cost of the coal-dominated grid.

So yes, the RET mechanism is essential to get this and other similar projects built but the actual subsidy is minimal. (Even though that doesn’t stop big energy retailers charging for it, but that is another story we will address next week).

The Australian's war on climate is also misinformed

It was revealing to see how the newspaper’s former editor-in-chief Chris Mitchell got in a muddle over climate change — and more specifically the recent hurricanes in the Caribbean.

Mitchell was full of praise in his Monday media column – titled 'Climate hysteria hits peak stupid in hurricane season' – for the paper’s environment editor Graham Lloyd, who Mitchell said was the only person who had “gotten the facts right” about Hurricane Irma:

'This paper’s environment editor, Graham Lloyd, stuck to the facts in a lengthy piece last Monday. Lloyd pointed out Irma had formed in a part of the Atlantic with unusually cool ocean surface temperature averaging 26.5C, about two degrees less than usual for such an intense storm.'

So let’s check that claim. It only takes about five minutes of research to discover this is total bunkum and we invite readers to go to the U.S. Hurricane Centre website and look at its advisory notices for Hurricane Irma to check for themselves. Readers will see that the centre caught sight of the storm on August 30, when it had formed in the comparatively cooler waters described by Lloyd – just like many other tropical storms – as Irma was classified then.

But then look at the entries from the next day and the following days; that’s when it saw the Hurricane change direction and move over unusually warm waters of 29°C — the sort of temperatures that would, and did, create a hurricane of enormous intensity.

This is a typical technique for climate deniers and renewable objectors too: take one point of data and invent a fake narrative. Talk about hysteria.

For good measure, Mitchell then rehashed all the usual right-wing talking points against renewables, getting the target of the current policy wrong, declaring that the Tesla battery was only good for a few minutes and swallowing coal lobby myths about the number of coal-fired generators being built around the world. 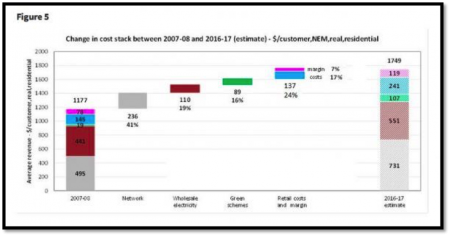 At least most consumers understand what the issue is

Mitchell, like the Murdoch media, Abbott, Joyce and the rest of right-wing nutjobs, say the high electricity prices are all the fault of renewables, despite yet another study they commissioned coming back with the wrong answer.

ACCC chairman Rod Sims – who will deliver a report to the Coalition government this week – gave some insights into what he will say and noted that “green” policies had contributed the least amount to price rises — significantly less than network gold plating, wholesale price surges and increased retail margins.

Sims acknowledged that the wholesale price jumps were the result of bidding practices that stemmed from too little competition, which meant the fossil fuel generators that dominated the market were free to push up prices as high as they dared — and it was all perfectly legal.

“Such behaviour is clearly allowed under the rules”, he noted, which will satisfy no one. Either the rules need to be changed or, better still, introduce more competition to the market. And the best way to do that is through more renewable energy and through more dispatchable generation — certainly not by getting the big players to keep coal-fired generators open longer or even building new ones.

The business community understands that, hence the push by the likes of Gupta, Sun Metals and Telstra into solar farms and other renewables.

Households and consumers get it too. Hence the record number of rooftop solar installations. And they understand that the combination of solar and storage offers the best chance of cutting their bills in the future, as a new survey by the Climate Council underlines.

It’s called the death spiral. We’ve been writing about it for years, even when electricity prices were half what they are now. As the biggest utilities continue to try to fleece consumers and push grid prices ever higher, the consumers will eventually wake up and start to seek their own solutions. That will be solar and storage.

Then the politicians who have helped to intensify and accelerate the price surge and the death spiral will have a real problem on their hands. 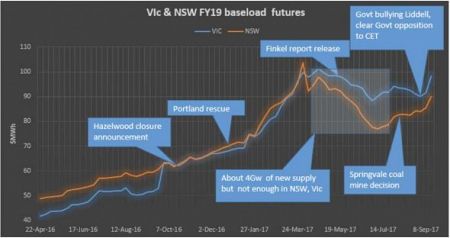 But don’t expect this mob to find a sensible solution. In fact, expect them to do more things that are really stupid. Just look at their attempts to force Liddell to stay open and what happened to the energy market prices when they did. This Government has a unique ability to push up prices.

Tony Abbott speaking with Ben Fordham re crossing the floor on renewable... https://t.co/ooGKrDxEcq

Dropping the 'clean' out of the COALition's clean energy targets @GilesParkinson https://t.co/O0IQUD4SRE @IndependentAus