To make a living, we must wreck our home?

Across the country, our prime farmland and future food and water security is under assault from miners, frackers and developers. You can replant trees but the land will never heal, nor will displaced communities recover. Dr Geoff Davies investigates the coal frenzy that is wrecking our home.

I SPEND A lot of my days trawling the follies of our time. To avoid sinking into the mire of despair, I need to keep a firm hold of love and hope for my grandchildren. But every now and then, something lands too heavily in my heart, and I can only grieve.

Tarwyn Park is the Hunter Valley property where Peter Andrews worked out how to get the water back into the ground, by reconstructing a degraded creek so it flows slowly and the water can soak across the valley. His work, a method he has called Natural Sequence Farming, is revolutionising the way we live in the Australian landscape, restoring its original productivity and resilience in the face of our challenging climate.

We learnt last Monday, 4 May 2015, in Part 1 of the ABC’s Australian Story that Tarwyn Park has been, very reluctantly, sold to a Korean-owned open cut coal mining venture so it can be dug up for the coal that underlies the valley. It would be hard to find a more apt metaphor for the blind stupidity of Australia’s ruling class.

Productive agricultural land is to be sacrificed. The beloved and iconic family property, the living scientific experiment, is so much overburden, to be scraped off to reach the dollars below.

Across the country farmland, communities, nature reserves and ecosystems are under assault from miners, frackers, and developers. They rabbit on about the billions of dollars and thousands of jobs, but the dollars will buy stranded assets, most of the profit will flow overseas, and they wildly exaggerate the number of jobs, which won’t last that long anyway.

They talk of “rehabilitating” land, but in rank ignorance of the complex hydrological, ecological and human systems they have disrupted. Once the groundwater is contaminated, it can’t be cleaned. You can’t just plant a few trees and shrubs and expect the land to heal. You can displace whole communities, but lives are changed forever.

It would be crazy enough if it were just the greed, but the coal frenzy currently gripping Australia is a death warrant for our global industrial system. The world’s coal-burning infrastructure is close to the point where it will push global warming above 2°C if it is allowed to burn for its projected lifespan.

2°C of warming is supposed to be the limit under which our politicians are aiming to keep us. That number never had a clear scientific basis, and there is increasing evidence it is too high. Already, at 0.8°C, the huge Antarctic ice sheet is showing disturbing signs of being destabilised, and many other symptoms of global warming are occurring sooner than expected. Anything above 1.5°C, or even 1°C, may pass tipping points into irreversible catastrophic warming. 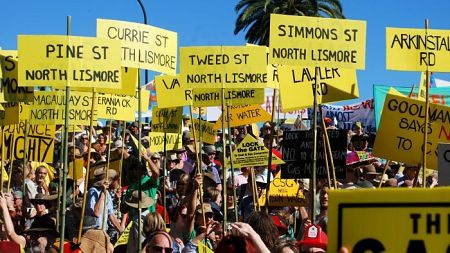 What they are telling us, over and over, the miners, the spruikers, the politicians, the media cheer squad, is that the only way we can make a living in Australia is by wrecking our home.

They are blind to the future they are committing us to. They are deaf to the sane alternative.

There are more jobs to be gained from investing the billions in clean energy and restorative agriculture, jobs that will last indefinitely and give our grandchildren healthy and secure lives.

Germany, that epitome of the modern industrial state, is moving rapidly along the clean energy path in a climate much less suitable than ours.

There are plenty of clean jobs and industries that can give us a good living while we preserve and restore this remarkable land.

Connecting a few more dots, if we wean ourselves off oil we can stop meddling in the Middle East, cease being a target of terrorism and reduce the displacement of people who become refugees.

Then Four Corners, the program following Australian Story last Monday, was about exploitation of agricultural workers, another depressing portrayal of how low we’re sinking.

Connecting more dots, the problem is Coles’ and Woolworths’ relentless cost cutting, requiring ever-lower prices paid to suppliers. They are driving our farmers out of business and promoting unsustainable factory farming run on exploited labour. When even that isn’t cheap enough, they import diseased berries from China.

The competitive push for ever-lower prices throughout the economy is unsustainable, because suppliers and workers are customers too. It impoverishes customers at the expense of shareholders. It is market fundamentalism run amok. If you want to know where that leads, look at the United States, which is in rapid decline.

The ABC, battered, intimidated, underfunded and occupied, no longer seems to see the big picture. It spent much of Australian Story on the Andrews family tensions, tabloid-style. Four Corners named Coles and Woolies as bad guys, but didn’t expose the pressure “they” are under, from nonsense neoliberal policies.

Australians have never supported market fundamentalism. They are slowly beginning to push back. That is why there’s a feral Senate. It’s called democracy.

I cling to my hope we will take back our thoroughly corrupted Parliament, and choose a sane and healthy future.

Dr Geoff Davies is an author, commentator and scientist. He is a retired geophysicist at the Australian National University and the author of Sack the Economists (Nov 2013, sacktheeconomists.com). He blogs at BetterNature: betternature.wordpress.com. You can also follow Geoff on Twitter @BetterNatureOz.

For more in-depth articles, subscribe to IA for just $5.