THE TURNBULL GOVERNMENT has adopted a new environmental compliance policy.

The new policy essentially negates provisions of the Environmental Protection and Biodiversity Act 1999 for violations of conditions for approval.

Although it’s impossible to find a legal interpretation of this latest development, the gist of this new effort ensures that developers, mining industry, corporations and State government departments like NSW Roads and Maritime Services (RMS) need not be constrained by conditions of approval, as breaches will now be rendered meaningless by the Department of Environment and Energy's Office of Compliance interpretation of enforcement. Kinda like being half pregnant. The words relating to environmental protections are there in black and white but in reality, they’re meaningless.

As always, the RMS upgrade of the Pacific Highway provides a perfect example. Although the concerned public, conservation organisations and residents along the increasingly destructive path of the upgrade have been constantly assured that conditions of approval will be “stringently adhered to”, these assurances are nothing more than bait for those who still believe in honest governments.

One of the most important Federal Government conditions of approval of Section 10 of the Pacific Highway Upgrade at Ballina is Commonwealth Approval Condition 13:

The approval holder must develop a Connectivity Strategy(ies) pursuant to the requirements of the NSW approval conditions D2 for each stage impacting on Threatened species and ecological communities. The Connectivity Strategy must minimise impacts to Threatened species and ecological communities to the satisfaction of the Minister and must be submitted to the Minister for approval.

Commencement of the relevant stage(s) cannot occur until the Connectivity Strategy for that stage is approved by the Minister. The approved strategy(ies) must be implemented.

This condition is specified in the RMS Ballina Koala Plan and the RMS Koala Management Plan section 3-11, the legal documents which allow the RMS to proceed with the destruction of a nationally significant koala population at Ballina.

At a recent meeting with Parliamentary Secretary for Renewable Energy and Northern NSW Ben Franklin and an RMS "environmental spokesperson” as the sole woman in the party of seven men – Ben Franklin’s definition of a “one to one meeting” on site – I asked the RMS spokesperson why there are no connectivity structures, as required under Condition 13. Massive clearing has been undertaken of primary koala habitat and the local roads are now groaning under construction traffic with animals trapped behind exclusion fences. 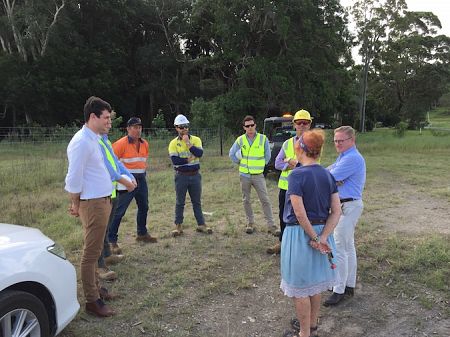 Advising that the structures would now not be installed until towards the end of the year — when the major clearing is well and truly over and the highway is on its way to finalisation.

The Ballina Koala Plan is unequivocal in its requirement for these structures [emphasis added]:

'The Ballina Koala Plan demonstrates that Section 10 is likely to have an acceptable impact on koalas provided that 26 connectivity structures are provided.'

Not one single structure has been installed.

A local resident sums up the impact on other wildlife on Face Book’s Koala Crisis page:

Australians for Animals Inc (AFA) engaged Environmental Defenders Office (EDO) lawyers to send formal complaints of breaches of relevant conditions of approval to the Federal Department of Environment and Energy EPBC Compliance Section. The first EDO letter was sent in July 2017 and a second letter was sent in October 2017. Lawyers identified breaches of Condition l4 and 23 as well as 13. To date, there has been no response.

Finally, after a significant dummy spit by EDO lawyers and AFA, a bureaucrat from the compliance section promised a response which finally arrived — nearly eight months after the initial complaint. A completely unacceptable delay and an excellent example of the extremely low priority non-compliance of developments’ impacts on listed EPBC threatened species can expect from the Turnbull Government.

But wait. There’s worse to come.

... The department acknowledges that the RMS has in part breached Conditions 13, l4 and 23 of the approval. The Department considers that the approval would not have been granted without these conditions being attached to the approval.

It would have been more honest and appropriate to indicate that the Federal Government asked the RMS if they’re complying, the RMS said "Yes" and that’s the end of the story.

This is shocking a mass killing of koalas. Pacific Highway Koala holocaust. https://t.co/IOGF0i7AtK

So far, eight dead koalas have been found at Section 10 of the upgrade. This mortality makes a total mockery of the RMS continual claim that there will be zero mortality of koalas. According to scientific experts, a mortality rate this high will drive the remaining koalas to extinction.

The RMS went ahead with their massive destructive clearing of primary koala habitat during breeding and dispersal season against the advice of the Australian Museum and the EPA NSW.

The EDO lawyers also advised the Chief Compliance Officer that:

The impact of the lack of compliant connectivity structures is very significant for koalas trapped behind exclusion fences and threatens their chance of survival  It will be too late to employ connective structures after the work is completed as koalas cannot survive without adequate access to habitat and food resources while waiting for the RMS to comply with its approval conditions.  Our client regards these breaches as very serious particularly in terms of the likely impact on koalas.

No doubt the EPBC Office of Compliance will take another eight months to respond. Rumour has it that the National Koala Recovery Plan – now six years overdue – will be released soon. We can expect this plan will not only ignore the devastation which the RMS has visited on NSW dwindling koala population but it will be a waste of paper.

The absolute hypocrisy of the Turnbull Government’s legal, moral and international environmental responsibilities is well demonstrated by the appalling treatment of these poor suffering koalas in Ballina.