The uncomfortable truth: The Great Barrier Reef is doomed

The Great Barrier Reef is unlikely to survive as more than a small, sad remnant of its past glory.

The reason is straightforward. It is well known in climate science that, even if we stopped harmful emissions tomorrow, global warming would not peak for another several decades. By then, most of the Reef will be long gone.

This is not pleasant news and clearly many would prefer it was not said, but there it is, the argument is simple and the conclusion is difficult to avoid.

The recent decision by the United Nations World Heritage Committee not to list the Reef as "in danger" is, of course, farcical. It reflects the crudest of politics, including the blinkered claim that Australia is not reponsible for global warming. Yet Australian governments, state and federal, do everything they can to spruik the coal mining that would ensure the death of the Reef and threaten to tip us into catastrophic warming.

Most news reports of global warming use only words and try for spurious he-said-she-said "balance", so you don’t get a very clear impression of what is really going on. A good graph is worth millions of such waffle words.

The following graph of global mean temperature is maintained and updated by Dr Mikako Sato of Columbia University in the United States: 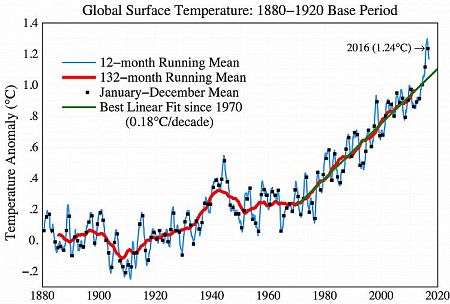 There is a clear rising trend and, especially since 1970, the trend has been very consistent. The green line shows Dr Sato’s straight-line fit to this trend. 2016 was by far the hottest year on record, well above the trend and, in November, just tipping 1.3°C above the baseline (the average from 1880 to 1920).

2016 was an El Niño year, and El Niño events raise the global average. Since then the temperature has fallen a bit, but it is still well above the trend. We must hope it returns to trend, or below. But even if it does we are likely still to be much hotter than in the previous decade.

From frequent news reports of "record" temperatures you may not have appreciated how unprecedented was the increase from 2014 to 2016, much the biggest three-year rise in the whole chart. You may even have got bored by the reports. The graph makes clear how remarkable the increase was. Among other things, it blew out of the water the deceitful claim by denialists that global warming stopped in 1998. Try to see that in the full data set, which they were usually careful not to show.

Now to coral. There was a big bleaching event in 2016, killing about 29% of the Great Barrier Reef, mostly in the north and middle. Another big bleaching event occurred earlier this year, killing more, so the mortality is now over 30%. That’s on top of losing half its coral cover since 1985.

Scientists and officials, in their restrained language, express "concern" for the future of the Reef, but what does that mean? Even if the temperature drops a bit, the trend is still up. Can the Reef recover and continue indefinitely? Can it stagger on for long enough for us to start getting serious about reducing greenhouse gas emissions?

Let’s have a closer look at what happens if the present trend continues, even for a couple of decades.

In the next picture, I’ve extended the green-line trend to the 2040s, as the orange straight line: 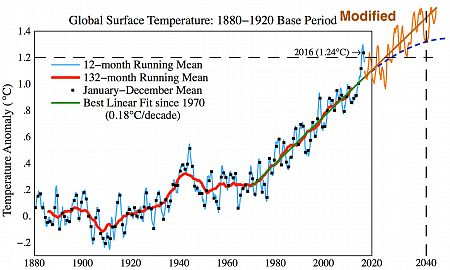 But of course, the temperature fluctuates above and below the trend. To represent that, I’ve copied an earlier segment of the wiggling blue curve, coloured it orange and pasted it over the projected orange line. It’s certainly not a prediction, but it gives us an idea of what sort of things to expect if present trends continue.

The orange curve tells us to expect major bleaching events every few years of the coming decade as temperature spikes above 1.2°C. That means the Reef will have little chance of healing itself.

So can we still save the Reef? That’s what this article is really about. If you remember what so few seem to be aware of, that warming for the next few decades is already "in the pipeline", then the prospects looks grim.

Suppose the world suddenly got sane and we set about the emergency reduction of greenhouse gas emissions, as scientists have been urging for several decades now. Even if emissions drop precipitously, there’s still too much already in the atmosphere. It takes a long time for the gases to be absorbed back into the land and ocean. In the meantime, warming will continue for 20 to 40 years — or even longer (the uncertainty is because we don’t know to what depth the oceans carry the extra heat they absorb).

To represent this, I’ve drawn the blue dashed curve, starting with the present trend but then bending over to peak around 2050. That’s a pretty optimistic projection. The effect is to delay things by a few years, so the disasters of the 2030s occur in the 2040s. But they would still occur. The Reef would still be mostly dead.

As if there weren't enough reasons to save the Great Barrier Reef ... it brings in lots of 💰 pic.twitter.com/tDPHomFB7d via @ajplus

You can quibble with the rough projections I’ve made and quibble about other factors involved in bleaching, but the reality is likely to be worse. Scientists are now doubtful that we can keep temperatures below 1.5°C and my curve doesn’t even reach 1.4°C.

Some scientists think corals have some chance of adapting and reversing a portion of the die-off if temperatures peak at “only” 1.5°C, but the corals’ diversity would be greatly reduced. If the peak is above 1.5°C, there is no chance of recovery.

If people like Donald Trump and Tony Abbott continue to be influential then global warming could even accelerate, as we pump out ever-more fossil fuel exhausts. Or natural reinforcings might already be kicking in and tipping the system into runaway. In that case, we would have to forget the Reef and worry about the survival of civilisation.

On the other hand, there is far more we can do to reduce emissions, reduce them quickly and live well as we do it. Leaders like William McDonough and Amory Lovins have long noted our wastefulness and the huge potential of good design and a cycling industrial system. Regenerative agriculture can not only reduce emissions but recapture and store greenhouse gases, all with abundant yields.

The Great Barrier Reef is not just a pretty decoration and earner of tourist dollars. Thousands of ocean species depend on it for food, shelter and breeding — even species that spend most of their lives far away. The effects of the present death will already be reverberating through ocean ecosystems. We depend heavily on the oceans to maintain a habitable planet.

There is a silence about the Reef. The massive bleachings have been prominent in the news, but nothing happens. We know it’s happening, but we don’t want to mention it. Why are we silent?

If our media were functioning properly, this dire prospect could have been widely understood before it became acute. The problem is not just the Murdoch media, which actively obfuscate and lie about global warming.

The media’s interpretation of ‘balance’ is so superficial as to seriously misrepresent the world. For example, paraphrasing a recent report: Much of the northern Great Barrier Reef is dead. But the good news is the southern parts are still mostly healthy. There is no good news. Such a report might reasonably have said, instead: The GBR has begun its death throes.

Context is usually deficient in media reports, as in 'Scientists Are Breeding "Super Corals" To Save Reefs From Global Warming', without mentioning that there are hundreds of species of corals in the Great Barrier Reef and the scientists can’t possibly breed them all. Anyway, the result would be marginal and only defer the inevitable.

It’s also true that scientists are often timid in their public statements, partly because they don’t want to endanger their reputations among their peers, or their research funding. The leading climate scientist Dr James Hansen has lamented this ‘dangerous scientific reticence’ and urged his colleagues to speak out, but to little avail.

There are other reasons for silence. Blind greed for present profits and power is a potent one. Some people recoil from unpleasant reality through psychological denial. Evidently many people feel helpless and helplessness breeds despair. Some know what’s happening, including scientists and it breaks their heart to have to say it.

But might there also be shame? We are the generation, out of all of the long history of humanity, that is allowing the glories of a planet to be destroyed. Oh dear, I’m not supposed to make my readers uncomfortable, they might switch off.

The question stares us in the face anyway. How will we face our grandchildren?

Dr Geoff Davies is an author, commentator and scientist.  He is a retired geophysicist at the Australian National University and the author of Desperately Seeking the Fair Go (2017). He blogs at BetterNature and tweets at @BetterNatureOz.