The Great Acceleration: An unequal world shows the strain

As the 'one per cent' meet in Davos for the World Economic Forum, a new scientific report shows the world risks being destabilised by human activity — most of it from a rich minority, writes Tim Radford from the Climate News Network. 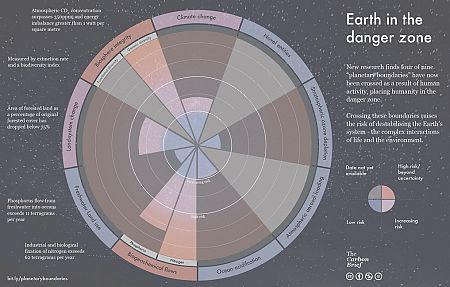 HUMANS ARE NOW THE CHIEF DRIVERS of change in the planet’s physical, chemical, biological and economic systems according to new research in a series of journals. And the humans most implicated in this change so far are the 18% of mankind that accounts for 74% of gross domestic productivity.

And the indicators of this change – dubbed the “planetary dashboard” – are 24 sets of measurements that record the acceleration of the carbon cycle, land use, fisheries, telecommunications, energy consumption, population, economic growth, transport, water use and many other interlinked aspects of what scientists think of as the Earth System.

Although these indicators chart change since the start of the Industrial Revolution in the 18th century, the most dramatic acceleration – the scientists call it the Great Acceleration – seems to have begun in 1950. Some researchers would like to set that decade as the start of a new geological epoch — the Anthropocene, from Anthropos, the ancient Greek word for mankind.

On the eve of this year’s World Economic Forum in Davos, Switzerland, a team of scientists, led by Will Steffen of the Stockholm Resilience Centre at Stockholm University and the Australian National University, report in the journal Science that the world has now crossed four of nine planetary boundaries within which humans could have hoped for a safe operating space.

The four boundaries are climate change, land system change, alterations to the biogeochemical cycle that follow phosphorus and nitrogen fertiliser use, and the loss of a condition called “biosphere integrity”.

80 people own same amount of wealth as 3.5billion people - New Oxfam report says half of global wealth held by the 1% http://t.co/LyIJkNdHvu

The scientists judge that these boundary-crossing advances mean that both present and future human society are in danger of destabilising the Earth System — a complex interaction of land, sea, atmosphere, the icecaps, natural living things and humans themselves.

'Transgressing a boundary increases the risk that human activities could inadvertently drive the Earth System into a much less hospitable state, damaging efforts to reduce poverty and leading to deterioration of human wellbeing in many parts of the world, including wealthy countries.

'In this new analysis we have improved the quantification of where these risks lie.'

The Science article is supported by separate studies of global change, including the International Geosphere-Biosphere Programme, also headquartered in Stockholm, which publishes an analysis in the journal the Anthropocene Review.

Meanwhile a team of European scientists warn in the journal Ecology and Society that out of 20 renewable resources (among them the maize, wheat, rice, soya, fish, meat, milk and eggs that feed the world), 18 have already passed their peak production.

And a separate team led by scientists from Leicester University in Britain has even tried to pinpoint the day on which the Anthropocene era may be said to have commenced. In yet another journal, the Quaternary International, they nominate 16 July, 1945: the day of the world’s first nuclear test.

This flurry of research and review is, of course, timed to help world leaders at Davos concentrate on the longer-term problems of climate change, environmental degradation, and food security, in addition to immediate problems of economic stagnation, poverty, conflict and so on. But these immediate challenges may not be separable from the longer-term ones. To ram the message home, the authors will present their findings at seven seminars in Davos.

In the Anthropocene Review, Professor Steffen and his co-authors consider not just the strains on the planet’s resources that threaten stability, but also that section of humanity that is responsible for most of the strain.

Although the human burden of population has soared from 2.5bn to more than 7bn in one lifetime, in 2010, the scientists say, the OECD countries that are home to 18% of the world’s population accounted for 74% of global gross domestic product, so most of the human imprint on the Earth System comes from the world represented by the OECD.

This, they say, points to the profound scale of global inequality, which means that the benefits of the so-called Great Acceleration in consumption of resources are unevenly distributed, and this in turn confounds efforts to deal with the impact of this assault on the planetary machinery. Humans have always altered their environment, they concede, but now the scale of the alteration is, in its rate and magnitude, without precedent.

'Furthermore, by treating ‘humans’ as a single, monolithic whole, it ignores the fact that the Great Acceleration has, until very recently, been almost entirely driven by a small fraction of the human population, those in developed countries.'

“Humanity has a new responsibility at a global level for the planet” – Will Steffen, Australian National Univ http://t.co/txYX4ANmxI

The IGBP-Stockholm Resilience Centre co-operation first identified their 24 “indicators” of planetary change in 2004, and the latest research is a revisitation. In 2009, researchers identified nine global priorities linked to human impacts on the environment, and identified two, ­ climate change and the integrity of the biosphere, ­ that were vital to the human condition. Any alteration to either could drive the Earth System into a new state, they said.

In fact, since then, greenhouse gas emissions have continued to rise, and accordingly global average temperatures have steadily increased, along with sea levels. At the same time, habitat destruction, pollution and hunting and fishing have begun to drive species to extinction at an accelerating rate.

Almost all the charts that make up the planetary dashboard now show steep acceleration; fisheries, one of the indicators that seems to have levelled off, has probably done so only because humans may have already exhausted some of the ocean’s resources.

“It is difficult to over-estimate the scale and speed of change. In a single human lifetime humanity has become a planetary-scale geological force. When we first aggregated these datasets we expected to see major changes, but what surprised us was the timing. Almost all graphs show the same pattern.

“The most dramatic shifts have occurred since 1950. We can say that 1950 was the start of the Great Acceleration. After 1950 you can see that major Earth System changes became directly linked to changes related to the global economic system. This is a new phenomenon and indicates that humanity has a new responsibility at a global level for the planet.”

"It is profitable to let the world go to hell" - http://t.co/xfr3y0RuxU pic: Tom Toro / The New Yorker pic.twitter.com/B8swe3kJsU