Renewable energy could supply Russia and Central Asian countries with all the electricity they need by 2030 — and cut costs significantly at the same time. Paul Brown from the Climate News Network and Komila Nabiyeva report.

A NEW study says that Russia and the countries of Central Asia could become a highly energy-competitive region by getting all their electricity from renewable sources within the next 15 years.

So far, most of the region’s governments appear not to have found the will to realise this huge potential. But researchers at Lappeenranta University of Technology in Finland calculate that the cost of electricity produced entirely from renewables would be half the price of modern nuclear technology and fossil-fuel burning if carbon capture and storage (CCS) had to be used.

This would make all the countries more competitive by cutting their costs, but would require the building of a super-grid to allow countries to share the benefits of a range of renewable energy sources.

The geographical area of the research − which did not include transport or heating − covers much of the northern hemisphere.

Many of the countries in the area rely on the production and use of fossil fuels and nuclear power. As well as Russia, the researched area includes Belarus, Kazakhstan, Uzbekistan and Turkmenistan, as well as the Caucasus and Pamir regions including Armenia, Azerbaijan and Georgia, and Kyrgyzstan and Tajikistan. 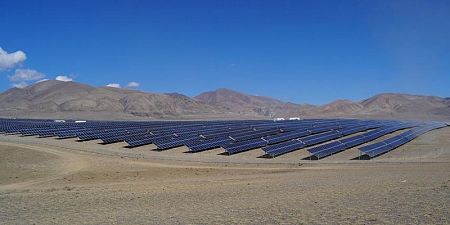 The total installed capacity of renewable energy in the system in 2030 would be about 550 gigawatts. Slightly more than half of this would be wind energy, and one-fifth would be solar. The rest would be composed of hydro and biomass, supported with power-to-gas, pumped hydro storage, and batteries.

Currently, the total capacity is 388 gigawatts, of which wind and solar account for only 1.5 gigawatts. The current system also has neither power-to-gas capacity nor storage batteries.

One of the key insights of the research is that energy sectors’ integration lowers the cost of electricity by 20 per cent for Russia and Central Asia. When moving to a renewable energy system, for example, natural gas is replaced with power-to-gas, converting electricity into gases such as hydrogen and synthetic natural gas. This increases the overall need for renewable energy.

The more renewable capacity is built, the more it can be used for different sectors: heating, transport and industry. This flexibility of the system reduces the need for storage and lowers the cost of energy.

“We think that this is the first-ever 100 per cent renewable energy system modelling for Russia and Central Asia. It demonstrates that the region can become one of the most energy-competitive regions in the world.”

The study is one of a number completed to see how various regions of the world can switch to renewables. All show that the barrier to progress is political will, and not a lack of affordable technology.

Although Central Asia rated hardly a mention at the Paris climate talks last month, effects of warming are already evident in the region, and governments are waking up to the dangers of climate change and the benefits of renewables.

Glacier losses are already significant, and scientists calculate that half of them would disappear with a temperature increase to 2°C above pre-industrial levels.

There are fears that this would increase tensions between governments over shared water resources used for irrigation and human consumption.

Especially vulnerable are the low-income and mountainous countries of Tajikistan and Kyrgyzstan, which rely heavily on hydropower for their electricity. Kyrgyzstan has such low carbon emissions that it barely registers, but it is looking at ways of cutting its emissions on a per capita basis as an example to the rest of the world.

Even oil-rich Kazakhstan signed up to the Paris Agreement and set targets for emission cuts. It is one of the world’s biggest emitters per unit of GDP, but has adopted a national plan to go for a green economy, with a fledgling carbon emissions trading scheme.

Despite these encouraging signs, most of the countries of the region suffer from lack of transparency in government and little pressure from the environment groups that are often helpful in fostering international co-operation.

The region’s share in electricity generation (excluding large hydropower) remains very low. It varies from less than 1 per cent in Kazakhstan and Turkmenistan to about 3 per cent in Uzbekistan and Tajikistan.

Kazakhstan, which is expected to become the biggest renewable energy player in the region, is taking the first steps towards exploitation of its substantial wind energy potential, while Uzbekistan is building the first on-grid photovoltaic park in the region, with support from the Asian Development Bank.

ADDITIONAL REPORTING: Komila Nabiyeva, a Berlin-based freelance journalist from Uzbekistan who reports on climate change, energy and development, contributed to this report.

So @TurnbullMalcolm is going ahead with Wind farm commissioner, despite claims in early days he'd be pro-renewables. https://t.co/pAQBzEL5CC