Plans for South Australia to be world’s nuclear waste dump

As the public outrage over the Fukushima nuclear meltdown dies down, nuclear industry proponents are reviving their plan for South Australia to be the world’s nuclear waste dump. Noel Wauchope reports.

Exquisite timing, because the South Australian election is on March 15 and Krieg's talk on this prestigious science program is the last effort of that State's nuclear lobby to get their cause up as an election issue.

The SA election date is three days after the third anniversary of the Fukushima nuclear disaster. That disaster is ongoing, with four reactors still in a perilous state and the continual leaking of radioactive water into the surrounding water table.

As a result of Fukushima, global enthusiasm for the nuclear fuel cycle has remained considerably dampened.

Along with that nuclear dampening, the uranium market has suffered badly. South Australia has seen the abandonment of BHP’s plan for a grandiose new open cut mine at Olympic Dam, crippling losses for Heathgate Resources’ Beverley uranium mine, Marathon Resources giving up on uranium exploration as an unviable business.

Australian uranium mining overseas has fared no better, with Paladin’s much-troubled Kayelekera uranium mine in Malawi now shutting down.

So, no surprise that Labor and Liberal contenders are being very low-key about nuclear and uranium issues.

For instance, the Herald Sun reports:

[Jay] Weatherill [SA Premier]: No (chance that SA will have a nuclear industry). I think it's a dangerous distraction…

[Steven] Marshall [SA Opposition leader]: It's only the sort of decision you could make from government, preferably in a bipartisan way. I'll be quite honest with you, the Opposition doesn't have a nuclear energy division, we're not in a position to make an informed announcement, it's a potential for the future but I think it would be a long way off.

"… timeline for how South Australia should embrace nuclear energy in the next three decades."

This would be the first step to the full nuclear fuel cycle. BHP should help the State Government to set up an infrastructure development program, and a nuclear education program in schools and universities.

In Terry Krieg's first ABC radio talk in September 2011, he revealed that he did not believe that anthropogenic climate change was true. That's all gone now, apparently, as was his latest pitch is all about nuclear power reducing carbon emissions.

“Australia will rightly be regarded as technologically backward and irrelevant."

This plea is not a one-off for South Australia.

South Australia has a long history of involvement with nuclear issues, from hosting Britain's atomic bomb tests in the 1950s, through a determined drive for importing nuclear wastes in the 1990s.

The usual suspects are still there: John White of the Nuclear Fuel Leasing Group, Alexander Downer, along with many others — as described by Sandi Keane in Plans for Australia to become world's nuclear waste dump.

They all just went a bit quiet after Fukushima.

In 2013-2014, a new distinctly South Australian push has taken up the torch. Terry Krieg, from Port Lincoln, is just one of many. These South Australians get inspiration from both national and overseas nuclear advocates. 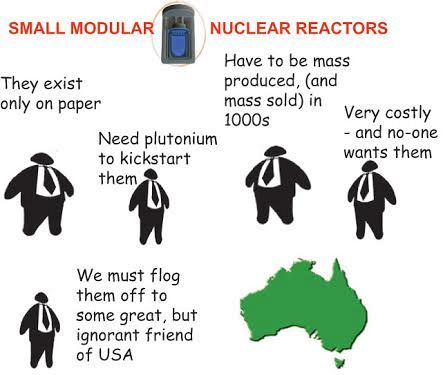 However, the Department of Industry recently recommended Small Modular Nuclear Reactors that they say can be

‘… readily dispatched into the market.’

This, despite the fact these designs exist only at the blueprint stage. It's not clear who was responsible for this extraordinary paper.

The Energy Policy Institute of Australia (EPI) says there has been:

‘… significant technological advances in safe nuclear power generation, suggesting small modular reactors (SMRs) as being particularly suitable for use in mines and towns in remote locations in many parts of Australia.’

Business Council of Australia president Tony Shepherd, who is also on Tony Abbott’s Commission of Audit and who has a varied range of business interests, has also called for nuclear power to be placed "on the table".

He calls for a:

As in previous decades, overseas nuclear publicists are also a big part of the push.

The most active is the USA's Breakthrough Institute with its nuclear advertorial film "Pandora's Promise,  shown around Australia late last year.

Brook's Twitter account @decarboniseSA hosts tweets from very active pro-nuclear tweeters. I suspect that these tweeters are either paid to tweet by the nuclear industry, or employed in a nuclear related industry.

In Adelaide, Professor Stefan Simons pushes the USA military connection and the desirability of nuclear submarines for Australia. Simons’ research at University College London’s Adelaide campus is funded by BHP.

Back in London, lecturers in UCL are not impressed with the pro-nuclear bias in his research:

“The issue is processing uranium for nuclear power that then can be used for defence. You have to understand this in terms of Adelaide — it’s a military industrial intelligence complex.

“Simons is connected to the University College of London, but basically he’s a front man for business interests. We can clearly question what he is doing, given the fact that he’s getting funding from indirect corporate sources."

"The first state in Australia which breaks through and builds a micro-power plant will be on to a winner."

And there’s another bunch of Adelaide business people now enthusing about the nuclear fuel cycle for South Australia.

"The development of a domestic nuclear power sector could turn us into the "Dubai of Asia". You'd almost be able to give every South Australian ... when they turn 18, a cheque for $50,000 and a house."

"What we've got unique resources for in this state are for nuclear energy... Never sell it, only lease it and bring it back here to bury it. I think that's the industry for the state."

I don’t know why this diverse group of people is so passionately in favour of the full nuclear power cycle and radioactive waste dumping for South Australia. I can only suppose that they see South Australia as an economically depressed state and therefore envisage the nuclear developments as some kind of financial bonanza for the State.

And I ponder whether some academics covet the kind of notoriety achieved by being Australia’s only climate “experts” advocating nuclear power.

It distresses me that only one of people mentioned has any expertise in health and ionising radiation. That person is Professor Pamela Sykes, who has been co-opted by the USA Department of Energy to try to prove how healthy low dose radiation is.