WHEN THE facts on climate change become inconvenient or they start to rub your ideology or vested interest up the wrong way, then there are really only two options available.

Option one is to change your mind. Option two is to try and change, distort, misrepresent or just outright ignore the flood of scientific studies over decades showing the serious impacts of loading the biosphere with fossil fuel emissions.

Mark Steyn is a prominent conservative polemicist and writer in the United States and Canada who has chosen option two.

Australian “free market” think-tank The Institute of Public Affairs chose option two in the late 1980s and has stuck with it since.

Now a climate misinformation book produced by the IPA and paid for with the help of tax breaks in Australia is seemingly helping to finance Steyn in a high profile libel case.

So there are two stories to tell here - one about the libel case and the other about the book. The two meet up at the end.

#lateline The #lieberals not a charity - what about the IPA? pic.twitter.com/ThkuUWGiFh

The cosy relationship between the Liberal Party and the IPA

Climate scientist Professor Michael Mann, of Penn State University, is famous for his analysis of temperatures in Earth’s recent past.

When the temperatures are plotted on a graph, they take on the shape of a “hockey stick” as temperatures spiked sharply in the back end of the 20th century.

In a blog post in the National Review Online, Steyn repeated a quote from the Competitive Enterprise Institute’s Rand Simberg who had compared Mann to convicted child molester Jerry Sandusky, who had been the coach of Penn State University’s football team.

Simberg wrote that Mann had “molested and tortured data” but didn’t mention that several inquiries into Mann’s methods have found his science was sound.

Steyn went on to describe Mann’s work related to the hockey stick graph as “fraudulent”.

Mann asked for an apology but was told in the headline to a follow-up story to “Get Lost”. The scientist subsequently sued the National Review, the CEI and Steyn for libel, with the case ongoing.

In response, Steyn has been openly using his SteynOnline website to raise support for his case and to pay for legal representation, which bring us to the IPA and that book.

The IPA keeps its funders a secret, although its supporters are known to include billionaire mining magnate Gina Rinehart and at least one major tobacco company.

The IPA holds Deductible Gift Recipient status with Australia’s tax office, which means that anyone giving money to the think tank for certain prescribed activities, such as research, can claim a tax break on their donation.

Last year, the IPA started fundraising to produce a book called “Climate Change: The Facts” which, when you glance at the list of contributors, should have its semi-colon shifted forward to better reflect the contents.  It should really be Climate: Change The Facts.

The IPA decided it would use its DGR status to encourage people to donate cash towards producing the book, which the IPA said would cost about $175,000.

As I wrote on DeSmog last year, this meant Australia’s tax revenue would be a tiny bit reduced so a bunch of climate science deniers could spout their usual conspiratorial mush. 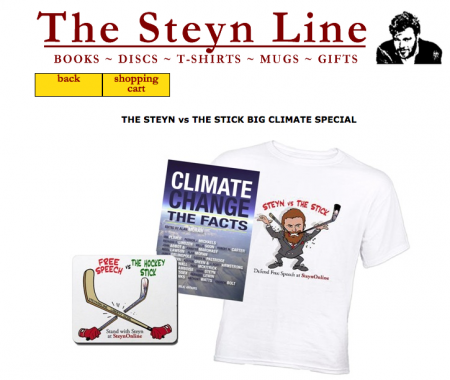 Mark Steyn, who has previously toured Australia thanks to the IPA, was one contributor. He has said the book will help “push back against the climate mullahs”.

Mark Steyn’s essay ‘Ship of Fools’ demonstrates how environmental activist, Professor Chris Turney inadvertently parodied Douglas Mawson’s Antarctic expedition. Turney had expected to see a path to the Pole cleared for his ship by global warming. After all, Al Gore had predicted an ice free Arctic by now. Instead, Turney’s Guardian backed expedition had to be rescued from expanding ice. A genuine scientist, as Turney claims to be, should have realised that Antarctic ice is expanding not increasing.

Just as Steyn did in an article in The Spectator, Moran failed to point out that Turney’s expedition did know about recent sea ice trends in Antarctica because they explicitly identified this as something to study before they set off. But hey, don’t let those facts get in the way.

Another of the chapter authors is British commentator James Delingpole, who works for the unapologetically right-wing Breitbart London website and who thinks human-caused climate change is largely a scam.

Dr Willie Soon, a part-time researcher at the Smithsonian Center for Astrophysics who has solicited more than $1.5 million in research funds from fossil fuel groups and conservative funders since 2001, also made a contribution.

The book has been produced and is now on sale internationally.

But according to retailers Amazon and Kobo, the book’s publisher is not the IPA but “Stockade Books” – a venture that’s actually owned by Mark Steyn.

Steyn is also offering the book as a paperback as part of a “The Steyn v The Stick Big Climate Special” on his website, which sells books and merchandise that also goes towards financing Steyn's libel defence.

Steyn says he'll even personally sign copies of the book. Hopefully he doesn't forget to thank the Australian Tax Office.

This story was originally published by DeSmogBlog on 14 May 2015 under the title 'Australian Tax Breaks Help Fund Climate Science Denier Mark Steyn's Libel Defense in the US' and has been republished with permission. You can follow Graham Readfearn on Twitter @readfearn.

3 April 2021, 11:00am The American oil industry is linked to a history of racism, a legacy that remains ...
Join the conversation
comments powered by Disqus
News updates