When countries embrace nuclear power to combat climate change the problem of disposing of the radioactive waste seems far away, but the costs will be enormous. Paul Brown from Climate News Network reports.

NOTHING DIVIDES environmental campaigners as much as nuclear power.

Some have always believed renewables offer cleaner power while avoiding the dangers of radioactivity and nuclear waste disposal. Others, including new converts who now support the industry, believe the threat of climate change is so terrifying that the drawbacks to nuclear power are far outweighed by its potential for producing large quantities of low-carbon electricity.

All governments who have nuclear power stations have to deal with practicalities and have a problem that so far is unresolved: how to get rid of all the radioactive waste their existing nuclear plants have produced.

It is a contentious issue even in countries that are phasing out nuclear power, like Germany, because no communities want to be blighted by being a nation’s nuclear waste dump. But it is worse for countries that share this unresolved nuclear waste problem yet want to add to it by building a new generation of power stations.

An example is Britain, where the Government stated four years ago it was unacceptable to build a new generation of atomic power stations while having no depository to get rid of the existing waste.

It was confident its Nuclear Decommissioning Authority (NDA) would solve the problem of old power stations and increasing quantities of badly stored radioactive waste. The NDA has failed to do so. The stumbling block has been that, so far, no community in the United Kingdom has been prepared to accept a waste depository.

With 20 nuclear reactors already closed down because they are no longer economic or have safety problems, the issue is becoming urgent — but there is still no solution in sight.

Despite these problems, ministers have decided the issue of climate change is so pressing that Britain must carry on building nuclear power stations, even though its plans to bury the waste have been postponed for at least half a century.

But while Britain is one of the few old industrialised countries that want to build new nuclear stations, many developing countries – including India, China and Vietnam – are keen to meet increasing energy demand with this technology.

They might do well to look at the issues they will face.

Across Europe and North America, the problem of decommissioning existing stations is huge and the cost astronomical. As a result a new decommissioning industry is growing very rapidly.

The attraction for the industry is the enormous amount of taxpayers’ money that will have to be found to deal with the problem. Already the British Government is spending £3 billion (about AUD $5.57 billion) a year across 19 sites, just to begin a process that is expected to cost £100 billion. That is the Government’s own estimated cost of dismantling the old power plants, with the added cost of disposing of the waste.

Across Europe, there are 144 reactors in operation, of which one third will have started their decommissioning process by 2025. There is enough work to keep thousands of people employed for more than a century.

The International Atomic Energy Agency estimates that the total value of the decommissioning and waste management market is £250 bn (AUD $464 bn) — a figure that is bound to rise.

In May, 200 of the world’s senior nuclear experts and waste management executives will meet to discuss progress in this difficult area.

The meeting, in Manchester in England, is being held close to Sellafield, which has one of the most intractable nuclear waste problems on the planet. It has dozens of disused nuclear facilities dating back to the 1950s, heavily contaminated with plutonium and other dangerous nuclear substances.

Meanwhile it continues to reprocess spent nuclear fuel for European and Japanese utilities with no clear plan about what to do with the associated high-level waste. Whatever happens, the site will take more than a century to make safe.

Although the industry gathering in Manchester will see the nuclear cleanup as a business opportunity, some British politicians are angered at the apparent incompetence, delays and rising costs of the companies involved.

Margaret Hodge, chairwoman of the House of Commons’ powerful Public Accounts Committee, said the costs of cleaning up Sellafield were rising to “astonishing levels”.

She accused the private company hired to clean up the site, Nuclear Management Partners, of missed targets, delays and cost over-runs, and her committee has demanded that the company should be stripped of its contract if its performance does not improve.

“The first term of our contract has been characterised by many successes but also a number of disappointments and areas for improvement.

“Our job now is to build on our experience of the last five years to safely and reliably deliver our customers’ mission, while further accelerating the pace of change and providing value for money to the NDA, the Government and the UK taxpayer.”

It appears that when countries embark on a nuclear power programme, the problem of the waste it will produce seems far away — but eventually the issue comes back to haunt them.

Pete Wilkinson, former member of the Government’s Committee on Radioactive Waste Management (CoRWM) and newly appointed director of the Nuclear Information Service, said the current state of affairs regarding the UK’s nuclear waste was intolerable. It was wrong to go ahead with a new nuclear power programme when the problem of dealing with waste was unsolved.

“For government to single-mindedly and wilfully push ahead with its new nuclear build programme when a repository remains a mere aspiration and when even the waste it produces cannot be guaranteed to be disposable is nothing short of irresponsible and is a measure of the desperation of a country and a government in crisis over energy policy.”

He said the Government’s waste management organisation had failed to resolve hundreds of technical and scientific issues, never mind ethical problems, to do with new build nuclear waste depositories.

He ended with a grim warning:

“It may be that disposal is not, after all, technically feasible or ethically acceptable. Meanwhile new nuclear build is threatening to give us and generations yet to come a future nuclear waste problem of disastrous proportions." 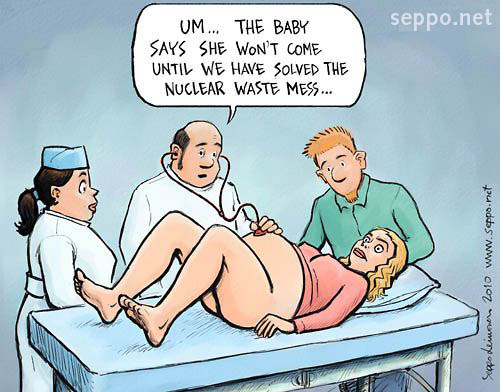