DAMNING INTERNAL NSW Forestry Corporation documents reveal what can only be described as a diabolical policy of destruction of NSW North Coast koala forests, with potentially terminal impacts on an extremely vulnerable koala population.

The North Coast has previously been declared the stronghold of koalas in the State. Given the delinquent and irresponsible policies of both the Baird and Berejklian governments, this population of koalas are now more likely to claim the title for government induced extinction. At a time when ministers are proclaiming the urgency and importance of saving the koala, based on the Saving Our Koala Iconic Species Project to be organised by the Office of Environment and Heritage (OEH), the reality is starkly different.

The koala crisis in New South Wales is now a national scandal. Mounting evidence of blatantly contravened logging rules, which were designed to maintain a natural multi-age forest structure, have been ignored.

According to Dailan Pugh, NEFA co-ordinator:

What is meant to be multi-aged forests, with diverse understories, providing habitat for a plethora or native animals, is being converted into younger and younger regrowth where the understory is bulldozed bare. In essence, the Forestry Corporation is transforming the north-east forests into quasi-plantations.

Logging is carried out by a method known as “single tree selection”, where no more than four out of every ten trees are selected for logging. Instead, Forestry is taking out eight or nine trees out of every ten and claiming its not clearfelling because a few scattered trees remain in a bulldozed landscape.

These forests will take centuries to recover their natural structure and function.

"Vandalism of a public asset on a scale that is breathtaking," says Dailan Hugh from the North East Forest Alliance (Image via nefa.org.au/koalas)

The koalas are particularly in trouble, says Pugh:

Koalas along with many animals, need older trees to survive. Koalas need these trees for shelter from droughts, heatwaves and predators.

We knew intensive logging was out of control, but when we saw the maps and the extent to which the logging has been carried out, it was shocking. About one in every three hectares of forest that has been cleared was high quality koala habitat according to the mapping recently released by the Environment Protection Authority.

Forestry Corporation is required to search all areas for koalas prior to logging, but we know that, out of 4,700 hectares of mapped, high quality koala habitat currently being logged in north east NSW public forests, only high use two koala high use areas totalling 1.2 ha.are protected.

Cabinet documents obtained by the North Coast Environment Council show the NSW Government is planning to enshrine and legalise new rules and logging contracts. According to NEFA, the ministers for Environment and Forestry are firming up plans behind closed doors to reward the Forestry Corporation for ten years of illegal logging by changing the law to make this destructive clearing legal.

"The vandalism of a public asset on a scale that is breathtaking is completely unacceptable. Most of the productive Northern Coastal forests are being turned into quasi-plantations. The reality is that the Forestry Corporation is two-thirds of the way through their logging program. NEFA is desperately trying to protect the last third."

NEFA is being even further hamstrung in its efforts, because legal action against the Forestry Corporation is well nigh impossible, as the Government ensures no possibility of public interest legal challenges. This, is in spite of the Environment Protection Authority acknowledging to NEFA that the forest destruction is “unauthorised” and outside “logging rules”.

No action has been taken.

In December, 2016, Professor Mary O’Kane in her capacity as NSW Chief Scientist and Engineer, released an independent review on the decline of koalas in NSW. Population estimates produced by Professor O’Kane suggesting 36,000 koalas in the state cannot be confirmed as there are no references to where these numbers exist. 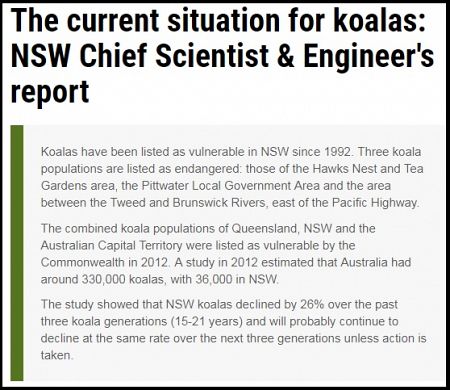 In any event, her estimate is at odds with the Federal Government’s Species Data Base, which estimated a population of 21,000 in 2010. This latter estimate is now significantly out of date .

In the intervening years, the destruction of koala habitat for development, mines, agriculture, forestry, highways and coastal housing has continued unabated with an exponentially decreasing number of animals.

A Koala Advisory Committee, set up to assist in the NSW Scientist’s review, included Michael Hood, the Forestry Manager at the Environment and Protection Authority, and Paul Wells, Director of Forest Research and Policy at the Department of Industry, Lands and Forestry.

The current approach in NSW for managing impacts of harvesting of public forests on the environment is through Integrated Forestry Operations Approvals (IFOAs). IFOAs integrate the regulatory regimes for environmental planning and assessment, protection of the environment and threatened species conservation.

The IFOAs define the harvesting volumes and type of silviculture practice allowed in koala habitat. Silvicultural practices applied on the north coast of NSW have changed during the life of the current IFOAs, with the NSW EPA advising that a more intensive form of harvesting emerged around 2007 in public forests, referred to as regeneration harvesting.

Within six months of receipt of this report, it is recommended that a priority research project is commenced to better understand how koalas are responding to regeneration harvesting forestry operations on the mid-north coast of NSW. The project will assess the effectiveness of current and proposed prescriptions designed to mitigate the impacts of forestry operations on koalas in these areas.

Koalas could soon b wiped out in areas of Qld, NSW due to land clearing, WWF Oz says https://t.co/4e4ZJQev4Z via @abcnews c: Cheryl Ridge pic.twitter.com/zzOSI9hhUj

Recently, NEFA and Australians for Animals Inc (AFA) representatives met with Professor O’Kane, together with the Acting Policy Director of the Office of Environment and Heritage, to raise both environmental organisations concerns over the looming extinction of koalas in NSW.

Dailan Pugh presented damning evidence of the illegal logging of high use koala forests. Evidence which has been provided to the Forestry Corporation and the Environment Protection Authority over many years. AFA focused on the destruction of critical koala habitat created as a result of the Ballina Pacific Highway Upgrade at a time when there is no effective operational koala policy operating in NSW.

Although Professor O’Kane listened sympathetically to the issues raised, no action on the part of the Government transpired. A request to meet with NSW Minister for the Environment Gabrielle Upton also received no response.

To further complicate matters, two koala committees have been set up by the government. As a result of the NSW Chief Scientist’s Independent Review into the Decline of Koalas in Key Population Areas in NSW, her primary recommendation was to set up a 'whole-of-government NSW koala strategy'.

Now, according to Professor O’Kane’s office, it appears that the OEH has also set up a Koala Advisory Committee Secretariat. Queries to the OEH as to who is on the Advisory Committee, how the Secretariat can be contacted, what the terms of reference are, details of when the Committee comes into operation and what the relationship will be between the Whole of Government Koala Strategy have not been responded to.

Associate Professor Jonathan Rhodes from the University of Queensland’s School of Earth and Environmental Sciences, a member of the Chief Scientist’s Koala Advisory Committte, informed IA that the whole-of-government koala strategy has not yet been written. 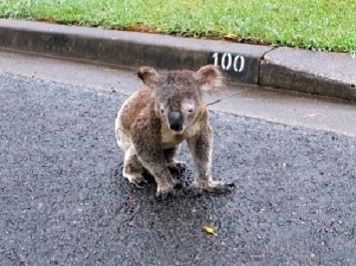 'That the government publish a state-wide predictive koala habitat map within three years of receipt of this report, with immediate priority given to improving coverage of the north coast.'

There are no recommendations relevant to Forestry Corporation’s over-harvesting or targeting high use koala areas:

'Although the Koala Advisory Committee recommended more studies in areas where regeneration harvesting has been applied or where it may occur in the future, further assessment of the current and proposed IFOA prescriptions to mitigate the impacts of harvesting is also required. The research will be necessary to understand the trajectory of koala populations in these areas.'

Conservation organisations focused on koalas in NSW could save the government a great deal of time and money. Koala populations in this state are unlikely to survive an extinction trajectory, which is a direct result of the appalling policies of the Baird and Berejeklian governments unless drastic and immediate action is taken to protect habitat.

Dailan Pugh sums up the ravages of this politically motivated destruction.

“Any animal relying on large trees will have no hope.”

Koalas are under threat from logging and land clearance in NSW. Please "Sign & RT" to prevent. TY. @AnimalsAus https://t.co/intM50C4VM … …

Stand up for the little guys. Subscribe to IA.