No Planet B, no Planet A

The waves are lapping at our Pacific Island neighbours' doors and all our political leaders can do is laugh, writes contributing editor-at-large Tess Lawrence.

THERE'S NO PLANET B for us.

And some of us seem intent on destroying Planet A.

There is no Tardis or Time Lord to deliver us from our environmental evils.

Despite the fact that Earth is the only world we've got, we have raped, plundered and disemboweled her, greedily gorging on her vital organs and intimate parts as if there is no tomorrow for others to also borrow.

We show little respect. We cause her great injury.

We are poisoning our own well.

We are boiling her. Her temperature is at fever pitch.

We are polluting the air that she and we breathe and share. We are robbing her of oxygen.

We recklessly soil her earthen coverlets and arterial creeks, lakes, rivers and oceans with toxic excreta.

We contaminate her with poisonous tailings from intensive and invasive mining and fossil fuels, leaving the land and landscape ugly and bruised, barren and lifeless and forever scarred.

We chemically airbrush out of existence complicated and exquisitely evolved vital tree-of-life ecosystems through our careless use of noxious and obnoxious insecticides, pesticides, herbicides.

We are killing our Mother Earth, abusing our elder. She who feeds us, clothes us, quenches our thirst without discrimination. It is we who hold our siblings to ransom, not the Planet.

It is we lucky ones who fail to feed the hungry, the homeless, the stateless.

We lucky ones who fail to share; to give shelter and succour to our brothers and sisters who are poor. We who make losers out of those who overwise could be mirror images of ourselves and whose DNA we share as children of the human family.

We disgorge lethal chemical waste and industrial discharge, sullying land, sea, sky and universe with putrid detritus of our plastic and disposable lives.

We are strangling her. Her lungs are filled with smoke. Blocking her airways. Suffocating her and the dear and wondrous creatures that live on her, above her, within her and below her.

We are killing her. Not softly. But roughly. Gouging out her soft tissue. Using our metal artillery with reckless and unforgiving mechanical claws; tearing at her entrails.

We dynamite her. We blow her to smithereens. We fly in and fly out and never leave things as they were.

We torch her and set her alight, searing her earthen skins, razing her lush lady gardens of mystery, beauty and the virginal modesty that cloaks her, afforded by the ancient ancestral forests that nature has bequeathed us and whose fragile remnants we are intent on annihilating. 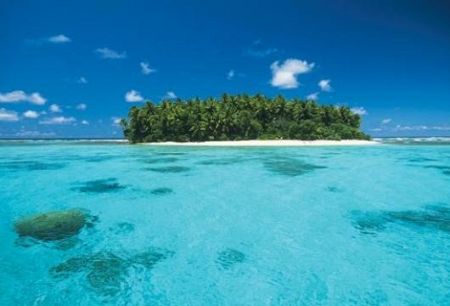 The Marshall Islands is sinking due to climate change (Image via undp-alm.org)

We subject her to the colonic irrigation of hydraulic fracturing. We force feed her. We inject her with noxious substances that inevitably we and all animal and plant life will absorb.

We pour acids on her.

We cause her to implode and bleed internally.

We inject and dislodge radionuclides.

We cause her to violently convulse and vomit. We trigger seismic shifts and earthquakes and contaminate waterways.

We taunt her. We buy and sell her, rent her and lease her out to multinationals for peppercorns and  listings on the stock exchange whilstt treasures that have been millennia in the making are removed with surgical imprecision.

But we remain ingrate landlords.

Our collective sins of emmission are such that permafrost and polar regions are melting into the ever rising seas, a hydrostatic perversity of Archimedes' principle and our unprincipled conduct.

Our Pacific island neighbours are drowning.

Some of our politicians think this is a joke. Peter Dutton, the loon who is our Minister for Immigration and Border Protection is one of them. Former Prime Minister Tony Abbott is another.

The ultimate Kommandant of the Austasi Border Farce, Peter is Dutton dressed up as spam.

Remember how Dutton and Abbott, unaware that they were being recorded, thought it a great larf that climate change has caused the encroaching sea to swallow up land on Pacific islands ?

In September, whilst impatiently waiting for a meeting about Syrian refugees to start, Minister Dutton quipped the delayed meeting was running to “Cape York time”.

In response, the then Prime Minister observed:

On a roll and taking his beloved leader's cue, Dutton tastelessly joked:

“...time doesn't mean anything when you're about to have water lapping at your door."

Abbott hah-hah-hahd at that one, as you can see. Little did Abbott know that weeks later, his colleagues and the majority of the Australian people would be having the last laugh when he got the boot.

Dutton's demise is yet to come, but come it will.

The joke was made the crueller by the fact that the coal-loving, wind-farm hating Abbott had just returned from the Pacific Islands Forum in Port Moresby, where he ignored entreaties from leaders of the Pacific islands sinking under the weight of the sea.

They were undertandably distraught about the survival and future of their communities, but were rebuffed by Abbott (and New Zealand PM John Key) when they sought assurances from their wealthier neighbours who, incidentally, monopolize the Forum, that we'd do more about our emissions and rising temperatures.

Both Mr Abbott and New Zealand Prime Minister John Key refused to go further than their existing commitments on global warming at the Pacific Islands Forum in Port Moresby.

The ABC's Eric Tlozek, reporting for AM from Port Moresby wrote:

Some Pacific island leaders say they are disappointed in the leaders for putting economic growth ahead of the survival of communities in small Pacific nations.

"Australia and New Zealand have made no additional commitments when it comes to climate change," Mr Abbott told reporters after the meeting last night.

"As you know Australia and New Zealand have already announced very ambitious targets for emissions reduction to take to the Paris conference."

Pacific island nations had said the meeting was their last chance to highlight the threat they face from climate change, before the UN Climate Conference in Paris.

The Australian response disappointed leaders who say some people are already being forced out of their homes by rising salinity, lack of water, or damage from severe storms or high tides.

The smug arrogance shared by Dutton and Abbott over this so-called "joke" came to mind when I was listening to an impassioned grandfather speaking at the United Nations Framework Convention on Climate Change's 21st Conference of Parties, held in the grieving Paris.

That grandpa was none other than Christopher Loeak, President of the Marshall Islands, one of the very Pacific Islands leaders rebuffed by Abbott and Key in Port Moresby.

Only now, Loeak had a global forum and his speech lacked much of the political connivance and lame excuses endemic in the speeches by leaders of larger countries, including our own.

Here are some excerpts that should provide a wake-up call and stimulate immediate action and support from Australia:

I address you today ...as a father, as a grandfather, as a custodian of my culture, and as a representative of a nation that lies just two meters above sea level and risks being submerged by the rising waves.

Everything I know, and everyone I love, is in the hands of all of us gathered here today.

The climate we have known over many centuries has, in a matter of three short decades, changed dramatically before our very eyes.

We all know, and must acknowledge, that the targets on the table now are not enough to limit warming to below 1.5 degrees, although they are a start in the right direction.

... if we’re to win the battle against climate change, the fossil fuel era must draw to a close, to be replaced by a clean, green energy future, free of the carbon pollution that is harming our health, stunting our growth, and suffocating our planet...

My country is in its hour of need. Like any other country, we cannot, and will not go along with an agreement that signs our sovereignty away. And today I have been presented a petition from 3.6 million people from around the world who stand with us in this quest...

Whilst we are busy courting the macro players in world politics, we need to start working closer with the micro players.

They often bear the brunt of our callous indifference.

It is surely important that we, the people, not allow state and federal governments to override us or impose misdeeds upon us, including violence perpetrated upon our beloved Planet as well as upon one another.

The likes of Dutton decry the right of the people – and journalists – to be activists.

Being elected into office does not automatically translate into a mandate to defy international laws and treaties, or to commit crimes and atrocities in our name, including crimes against nature.

Our Earth is sorely injured and she is hurting. Fury is unleashed and vented. We are overheating her.

What else are the rising seas but tears shed in lament and sadness and pain? What have we done to her? What are we doing to her?

We have a duty of care and responsibility for the Earth, including the part of her that is Australia.

Despite all we have shamelessly done to her and despite prevailing dictum by some that we humans hold dominion over the Earth and all its creatures great and small, she still pirouettes upon her axis as we precariously cling to her skirts — occasionally in fear, often in joy.

Sometimes if you lay down on her, with your ear to the ground, your heart upon hers, I swear you can feel her heartbeat alongside yours and the gentle breeze that is her lullaby sings of peace and kindness and love upon us all.

And for that sweet split second, all is going according to Planet A on Planet E.