Renewables are the investment of choice but the transition is being held back because Australia's outdated energy market rules make no sense. Giles Parkinson reports.

THE HEAD of the Australian Energy Market Operator (AEMO), Audrey Zibelman, says Australia is transitioning to a new energy system faster than any other economy, but this transition could be held back because its energy market rules are rooted in the past.

Zibelman told an American Chamber of Commerce function in Adelaide on Friday (23 March):

You can’t expect the technology to move as fast as it is and the market design to stay the same as it was in the 1990s — almost pre-internet … it doesn’t make sense.

What I think is incredibly fascinating about Australia … is the rate of technology change and evolution in Australia is faster than almost anywhere in world.

What we need to do is to modernise our regulatory and market systems to take advantage of these changes … and to smooth the transition.

It is not the first time Zibelman has made such comments but these latest rank among the most forceful and came in the same week that AEMO released a major document outlining some of the areas where it believes the market is falling short.

Its main focus in areas such as valuing flexibility – demand response and battery storage, for instance – and distributed energy resources (rooftop solar and storage and software).

It is also focusing on new interconnectors (to spread geographic risk and resources of wind and solar), changes to forecasting, the implementation of strategic reserves and day-ahead markets and more resilience in the face of increased heat-waves.

Then, of course, there is the National Energy Guarantee. Zibelman, who is part of the Energy Security Board, clearly supports this but noted that "AEMO had gotten its comments in” to the review process.

The NEG has received widespread criticism from the industry, mainly because it lacks ambition and its reliability guarantee is so ill-defined.

Energy market players and regulators see huge risks to the way it may be implemented and say it would likely result in less competition and higher prices unless significant changes are made to the draft outline.

Prominent companies such as Tesla have pointed out that markets do not yet exist for technologies such as their big batteries, and others have complained the rules are weighted in favour of incumbent technologies.

AEMO is also pushing for numerous other changes to the way the energy market works and to encourage flexible, dispatchable capacity to respond to the changing needs of the market.

Zibelman said two important trends in the energy market now were the falling cost of renewables and the rapid uptake of rooftop solar by consumers.

She noted – not for the first time – that AEMO currently has connection requests for some 20,000MW of new energy capacity. And every megawatt of this proposed capacity was for renewable energy. “They are the investment of choice,” she said. 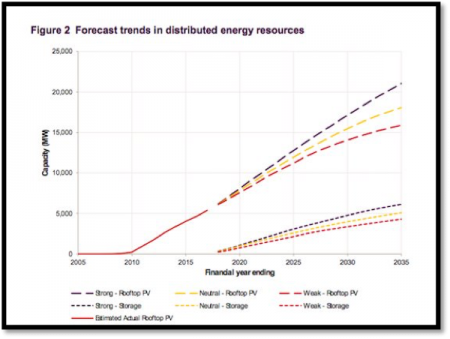 Zibelman also spoke of the “incredible uptake of rooftop solar”, which is now running at more than 1GW a year and could, within a decade, account for 30-40 per cent of demand in places such as South Australia.

Zibelman said of the trends to renewables and the uptake of rooftop solar:

“There’s customer choice going on and an economic phenomenon going on. To me, the most important thing is that power continues to be an essential service … so that everything we do is driven around sound economics — and on keeping the lights on.”

Zibelman also spoke of the need for increased interconnection between grids and to unlock renewable energy zones — which could ensure that large-scale renewables are not built in areas where their output would have to be curtailed because of lack of infrastructure.

AEMO intends to address this in its Integrated System Plan. To some analysts, this will be more important even than the NEG in setting a plan for the future grid.

Zibelman also spoke of the rapid digitisation of energy technologies and the need for storage to deal with increasingly variable output as the penetration of wind and solar increases.

South Australia – where the American Chamber of Conference function was held – is already sourcing more than 50 per cent of its supply from wind and solar, and appears set to reach 75 per cent by 2025, or even earlier according to a recent AEMO report.

Zibelman shared the stage with Deion Campbell, the head of Tilt Renewables, which plans to install a new solar farm with battery storage at the site of the State’s biggest wind farm, Snowtown.

Asked where he saw the renewable energy share ending up, Campbell said:

“I think it will be fully renewable. Why not embrace it?”

Daniel Thompson, the head of development at SolarReserve, which hopes to deliver a 150MW solar tower with eight hours of molten salt storage, along with other projects in the future, has a similar view.

“There is huge momentum in renewable energy in south Australia at moment. It may not be 100 per cent, but we are going to see a lot more."

Zibelman said that in ten years time, the influence of distributed energy – rooftop solar, battery storage, and smart software – would mean smart homes and consumers who understood their appliances, such as pool pumps, rooftop solar, fridges, would respond to price signals.

This article by Giles Parkinson was originally published in RenewEconomy and has been republished with permission. You can follow Giles on Twitter @GilesParkinson.

next time you hear @JoshFrydenberg say we need to redesign the NEM because our network is unreliable, ask him:
• how much more reliable than 99.998% should we 'gold plate' the standard?
• how would the #NEG have helped prevent the 2017 load-shedding in NSW and SA?