“The one difference in this country, the massive difference between the Labor Party and the Liberal Party, is energy policy.”

Thus, in one comment, did Sky News host Peter Gleeson neatly cut to the root of Australia’s crippling energy policy divide while also explaining the reaction of the nation’s far-right to the New South Wales Liberal Party’s warm embrace of renewables.

It’s one thing for wacky Labor governments to support “green stuff,” but for the Liberal government of a blue-ribbon coal state like New South Wales? 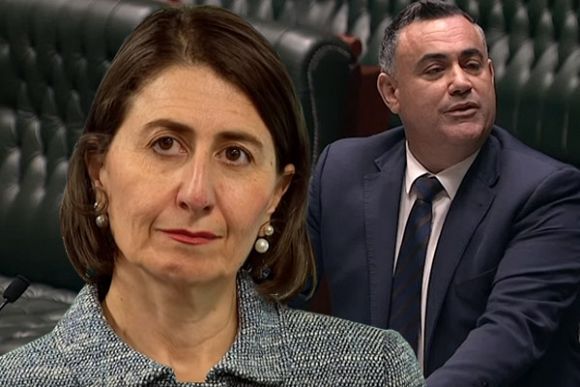 Certainly, this flagrant blurring of party lines was far too much for the likes of Matt Canavan and Barnaby Joyce, who on the same day that The Australian published an eight-page special on coal, joined the equally outraged folk at Rupert Murdoch’s Sky News to stress how important it was that everyone just stay in their political lane – facts and climate be damned.

Canavan fumed in an interview with Gleeson on Sky News:

If they were cheaper, people would be investing in them. They would be jumping out of buildings to invest in them, because they’d be cheaper, they’d undercut the current price and they’d make a lot of money out of them.

"That’s a myth. And the reality is these are dud investments that need to be propped up, and they’re propped up on the back of pensioners and poorer people who can’t afford their power bills, and they’re going to go up because of the NSW government’s desire to ram through renewable energy into people’s homes."

Of course, Canavan is wrong on so many counts. The NSW plan is not a tax on power bills, more an underwriting deal that only comes into place if electricity prices fall too far. In other words, if the plan costs anything, it’s because the state and consumers are already saving more.

So angry is Canavan that gas won’t even cut it, it’s coal or nothing for NSW as far as he is concerned:

We should drop this plan to build a gas-fire power station in the world’s best thermal coal basin, in the Hunter Valley … and build a coal-fired power station there.

I was told a few months ago when I raised this issue, when I pushed for it, "yeah that makes sense, Matt, but the NSW Government doesn’t want to do it". Well, they’re not cooperating with us any more so let’s just get on with it.

They can go down and build as much green, renewable energy stuff that doesn’t work half the time, and we’ll build something that can actually be on 95 per cent of the time, can deliver cheap power and can get factories going again in Australia.

Peta Credlin, former Abbott advisor turned Sky News host, has also been working overtime to rectify the tear in the political space-time continuum. After all, a Liberal Party that supports renewable energy would be a death of sorts for the Murdoch media and its core of conservative commentators.

In a separate discussion on Sky News, she said:

You can have a frolic from a minister, but it then gets ticked off by cabinet, through a party room, and then voted on by all of those lemmings in the Liberal Party in Parliament.

It’s not just crazy keen green Matt Kean, but it’s all the other people that jumped over the cliff with him, I think it’s nuts.

“Shame on a weak cabinet in NSW.”

And Barnaby Joyce, whose own NSW electorate was approved for a new solar farm just this week, was equally outraged, describing Kean’s Electricity Bill as a “pixieland power plan”.

“There has to be a sober assessment to stop an impending fiasco as we destroy our power reliability. This means hard decisions by leaders and that means the PM will unfortunately otherwise be held accountable to the extent that he could have avoided an impending power collapse.”

Toxic emissions from burning coal can cause serious health damage to not only the environment but to all humans, including the unborn.

Sophie Vorrath is editor of One Step Off The Grid and deputy editor of its sister site, Renew Economy. Sophie has been writing about clean energy for more than a decade.

This article was originally published by Renewable Economy and is republished with permission.