An EPA (NSW) approved Santos CSG waste water experiment near Narrabri has gone ahead despite limited assurances and little evidence as to its safety. Johanna Evans reports.

SANTOS BEGAN IRRIGATING with coal seam gas-produced and treated wastewater at the Leewood facility near Narrabri in August 2017.

This came after a lengthy direct action campaign protesting the construction of the treatment plant and a court case challenging its classification and government approval.

The wastewater is treated by a process known as reverse osmosis and then "beneficially reused" by irrigating crops on a 49ha area adjacent to the Newell Highway. The area is surrounded by an electrified 1.8-metre fence, presumably to keep out wildlife.

Over the past several months, I have come to the conclusion that environmental harm could be occurring at Leewood. There is a profound lack of testing being conducted considering that this treatment plant is a first for NSW. Despite there being a tax-payer funded $5 million EPA office (Gas Regulation Branch) in Narrabri, only 84 inspections were conducted in the 2016-17 financial year — the majority of these being routine inspections. What you don't test for isn't there.

In late August 2017, I happened to be driving past with friend and writer, Elizabeth Farrelly, and we noted that the waste was being sprayed, so we stopped to have a look. With the wastewater misting over the barley crop, we watched in amazement as a drone was flown towards us. It hovered directly in front of us, not more than ten metres away, before flying over us and the tree line adjacent to the highway, capturing the registration plates on our car and then flying back towards a white ute just visible at the other end of the irrigation boom. How the operator could see their drone I don’t know, I could only just see their vehicle. This was reported to CASA. 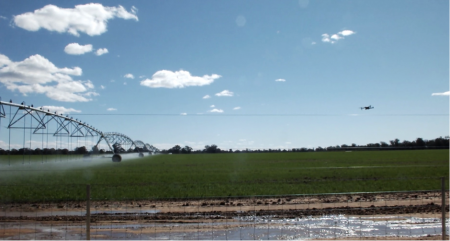 Why does a simple irrigation operation need so much protection?

In September, Santos Vice President (NSW) Bruce Clement was interviewed by ABC NSW radio and stated that the barley would be ploughed back in before planting lucerne on the property. Mr Clement also claimed that “realistically, you probably could drink the water”.

Prior to 15 September, the barley was ploughed back in and the soil prepared for planting with lucerne. Lucerne was then planted and Santos posted on Facebook in October, that the crop was "looking good".

By halfway through November 2017, roughly 225 megalitres of water had been used at the site (calculated from Mr Clement’s ABC interview) and drone images were supplied to me that prompted me to write to the NSW Environment Protection Agency (EPA)., expressing concerns about the percentage of crop cover. 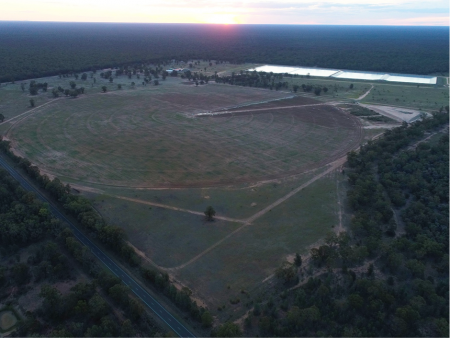 I can confirm that the current lucerne crop was planted on the 1st October 2017. On the 27 October 2017, a10 ha area on the western side of the cropping area was reseeded (as it had not taken to a standard that Santos were happy with). This 10 ha reseeded area constitutes approximately 20 per cent of the total cropping area ...

... The irrigated crop looks healthy and is relatively uniform in growth across the area, having regard for the 10 ha area mentioned above and appears to be progressing well. After inspecting the irrigated crop the EPA found there was no evidence which necessitated further investigation of your concerns.

Santos' Irrigation Management Plan (IMP) indicated that a healthy, actively growing crop is required to utilise the treated water, but after six months of irrigation with the treated CSG water, additional images have emerged of an unhealthy looking crop that poorly covers the 49 ha area.

These images captured on the 31 January 2018 reveal areas of poor ground cover after three to four months of growth. 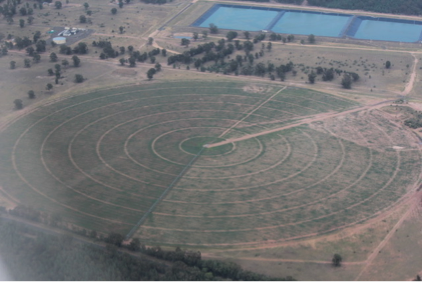 The community now has to wait another five months for soil and water data to become available. Why is Santos allowed such a long timeframe in which to provide data? After the failure of the EPA approved Irrigation Trial at AGL’s Gloucester CSG project, which used CSG waste, one would think that more frequent testing would have been employed to prove safety and efficacy.

Santos denies reaching a trigger level late last year but they did choose to be proactive in reseeding a 10 ha area that had failed to germinate, according to correspondence with the EPA in December 2017, in which my concerns were deemed "premature".

According to the project's IMP, two transects of the surface 10 cm of topsoil should be sampled annually and the soil analysed for nutrients, SAR (sodium adsorption ratio), pH1:5 and EC1:5 (electrical conductivity). But is testing being done for heavy metals or organic compounds? Certainly, no testing is being done for radioactivity, despite the EPA instructing Santos to keep tabs on this issue in 2014.

Santos has been asked for information regarding naturally occurring radioactive materials (NORMs). To date there has been no response.

I also approached the EPA for information on NORMs on 4 September 2017.

In the commissioning phase of the Leewood WTP, the Government required Santos to sample the produced water as well as the treated water. In these samples, the analysis checked three isotopes of uranium and two of thorium, measured quantities are in becquerels per litre (Bq/L). 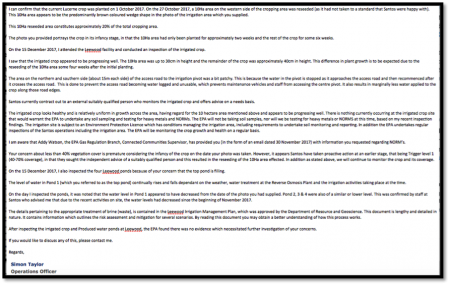 Screen shot of email from EPA to Johanna Evans (supplied).

The EPA's own water quality unit recommended in 2014 Santos monitor ground water for ''radionuclides'', which include thorium, radon and radium. Why did Santos not test for radium and radon when Leewood was commissioned?

In a review of Santos’ Agricultural Impact Statement, the Office of Agricultural Sustainability and Food Security assessed the project as having a high risk of significant adverse impacts and potential loss of the agricultural capacity of the lands affected. It requested that the Santos IMP provide more information on the irrigation water quality, including bicarbonate levels, heavy metals and metalloid levels, with particular reference to lithium.

The EPA inspected the crop in December 2017 and communicated that they thought the crop was growing well and that the irrigated crop looked healthy and was relatively uniform in growth across the area. The images captured tell a completely different story.

The EPA was again contacted in early February with new concerns raised by the aerial images taken on the 31 January 2018, showing the crop to still be quite sparse. Santos has conveyed to the community that a harvest was taken in January 2018 and indicated that the crop will not be made commercially available.

'The lucerne was not grown for the primary purpose of optimising yield.'

This is contrary to what Santos indicated in its Agricultural Impact Statement. Santos intended to take up to five cuts/harvests per year (see table below) and increase the net productivity of the irrigation area from $22,540 to $136,514. After seven months, only one harvest has been taken and it was not sold but is rather stockpiled somewhere on site — for a purpose that is clear. 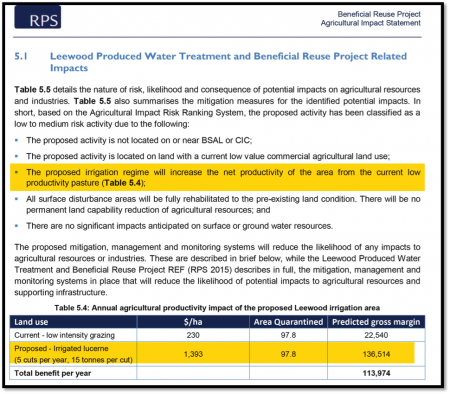 In the same statement, Santos claims that it will harvest 75 tonnes of lucerne per year and that this will be worth $1,820 per tonne. This lucerne must be gold-plated. Current prices for lucerne are around the $230 per tonne mark. 15 tonnes per harvest from 49 hectares is well below industry standards for an irrigated lucerne crop.

Is this whole exercise just an excuse to get rid of an unwanted waste product? 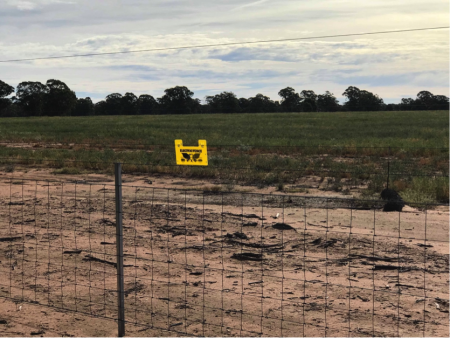 I recently passed by Leewood and stopped to take some new images. The crop looks poor, weedy and has brown/burnt looking sections. It’s concerning to me that this coal seam gas waste is being used and the community has very limited assurance that this practice is actually safe for the environment.

Santos has not published any images or spoken publicly about the irrigation since the Facebook post dated 27 October 2017, shown above.

It's time to get serious about banning this invasive form of land cancer in NSW – It starts with just one well.#CSG #NSWpol #NSWGasBan pic.twitter.com/O59I0wNBbN

Johanna Evans is a graphic designer and advocate for a CSG free NSW. You can folow Johanna on Twitter @JoJamesHolden.

Ah, something seems pretty wrong at Santos' #CSG irrigation experiment near the Pilliga. Have you tested the water @NSW_EPA? pic.twitter.com/CppxagFN6N

Stand for the environment. Subscribe to IA for just $5.

31 July 2020, 8:00am The controversial Narrabri Gas Project has raised concerns over the disposal of ...

4 March 2020, 3:30pm Based on the NSW Government's failure to comply with safety recommendations, the ...
Join the conversation
comments powered by Disqus
News updates