Is Monsanto killing our bees?

Many thousands of people gathered in 436 cities around the world on the weekend to protest against Monsanto’s anti-social practices, but this was barely noticed by Australia’s media. Beekeeper Matthew Mitchell reports. 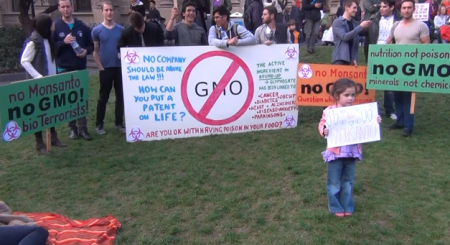 On SATURDAY 25 May, around 5,000 people protested in Melbourne as part of the global March Against Monsanto. According to a statement by an organiser in The Guardian newspaper, protests were organised in 436 cities in over 50 countries.

Has anyone seen this in Australian newspapers? I was unable to find it with a search in The Age. If it was there, it certainly wasn’t prominent.

One catalyst for the global march appears to be the “Monsanto Protection Act”, which according to Russia Today will:

‘…strip federal courts of the authority to immediately halt the planting and sale of genetically modified (GMO) seed crop regardless of any consumer health concerns.’

The new law has the effect of

‘…protecting genetically modified seeds from litigation in the face of health risks.’

In The New York Daily News, Senator Jeff Merkley is quoted as saying:

“The fact that the act instructs seed producers to ignore a ruling of the court is equally troubling. It raises profound questions about the constitutional separation of powers and the ability of the courts to hold agencies accountable to the law and their responsibilities.”

Because of the dangers of neonicotinoids, the European Health Commission is instituting a 2 year ban on these chemicals, beginning on 1 December, 2013.

One effect of these chemicals is that they appear to kill bees.

The world’s bees (outside of Australia) are already under severe stress from varroa mites, which kills all wild colonies and allows commercial keepers to maintain theirs only with severe difficulty, usually aided by other chemicals. Bees which were being researched for resistance for Monsanto’s Roundup have been apparently illegally seized.

“A single corn kernel coated with a neonicotinoid can kill a songbird .… Even a tiny grain of wheat or canola treated with the oldest neonicotinoid ‒ called imidacloprid ‒ can fatally poison a bird. And as little as 1/10th of a neonicotinoid-coated corn seed per day during egg-laying season is all that is needed to affect reproduction.”

Given the already perilous state of Australia’s wetlands, birds and ecosystems, these issues should be much higher on our political agenda and, rather than winding back our environment protections ‒ such as protecting bio-diversity ‒ we should be looking to strengthen them.

Certainly Australia’s mainstream media should not be downplaying large scale efforts to draw attention to these issues, as they seem to have done with last weekend’s large-scale March Against Monsanto.