WILL VICTORIAN Energy Minister Wade Noonan continue the campaign of deception and sell out Victorian farmland to a cunning gas cartel built on lies, manipulations and cover-ups?

The community are becoming very edgy as we near D-Day for a decision on whether Wade Noonan will allow onshore gas exploration or agree to a total ban.

With the upcoming Council of Australia Government (COAG) Energy Council on August 19, Federal Energy and Environment Minister Josh Frydenberg, #Mr Gas, has onshore Victorian farmland and Bass Strait as part of his big gas conspiracy to bail out the gas cartel from their own incompetence.

Josh gone soft on coal big on gas. Is a deal to be made with enviro groups over Vic community re tax concessions @JoshFrydenberg @GippsNews

But as players in this onshore gas debate continue juggling for last minute wins, the last thing the community needed was a change in the conversation. A monumental stuff-up by Victorian Greens Resources and Energy spokesperson, Ellen Sandells, on her regional anti-gas tour with NSW Greens MP, Jeremy Buckingham, and grazier, David Quince, has set in motion a change of events that could just tip Wade Noonan into the hands of industry all because they have been fed a simple and very clever lie.

This is a gross distortion and a total shift from where the argument should be which is the full-cycle impacts from all forms of hydrocarbon extraction, regardless of technique or gas origin in rock formations or coal beds.

A classic example is the gas bubbles in the Condamine River. Nearby CSG fields used the conventional method of depressurisation to extract groundwater to release gas causing horizontal movement that activated a fault under the river. This created a fissure allowing migration of gas. That’s why presumptive liability, as exists in many American states, should be part of our legislative framework. 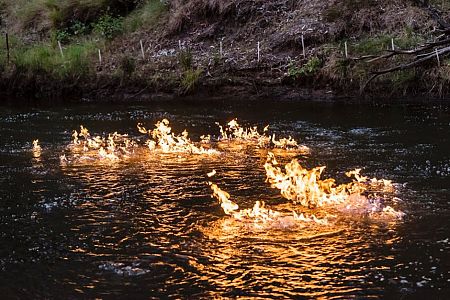 Queensland's Condamine River on fire as a result of gas coming up in the water from underground fissures. Photo courtesy abc.net.au.

As holder of significant reports, some withheld from the public, the hazards and impacts caused from decades of conventional hydrocarbon extraction in Gippsland are many, serious and permanent but the only people who know about these impacts are the scientists who study it, the people who are impacted by it and industry and government who have done a great job hiding it.

This is why former Liberal Senator Heffernan spoke out in Canberra at any opportunity:

"This is a lesson for all Australians. When we gave Esso an exploration licence for off the southern tip of Victoria there was no environmental work done about what they do about the recharge of the aquifer. In the next 40 years, as a consequence of the Esso gas and oil field, there is a better than 45 per cent chance that there is going to be major coastal subsidence into the sea in the Gippsland. That is because they did not do the science...”

The second bombshell from the Greens' roadshow was their declaration that

‘Bass Strait off Victoria has enough gas for 200 years that can supply the whole eastern seaboard and have enough over for export.’

Well that was news for us in Gippsland with Esso presenting to Wellington Shire in 2009 stating that:

“they only had approximately 35 years left of recoverable gas.”

A recent story in the Australian Business Review backs up this scenario but omits to note that what gas is left is the dregs and full of mercury which is very problematic for separation and disposal. The other concern is the precarious state of aging pipe infrastructure. There is 600km of underwater pipelines with some 40-50 years old rocking and rolling on an unstable seabed weakened by the ever increasing seismic activity. Foaming brown surfactants is the evidence of many spills over the years.

The story originated from AGL Chief Michael Fraser to assure supply to gas customers only until 2020.

At the time, Paddy Manning at Crikey said:

‘Wittingly or unwittingly, politicians at a state and federal level (not to mention certain willing dupes in the media) have been sucked into the scare campaign, right up to Industry Minister Ian Macfarlane, who has used the looming shortage argument to put maximum pressure on the NSW government to approve CSG projects.’

But Paddy Manning has actually got it wrong, in my view. It is purely an investment angle to capital raise. As the report from PAC Partners Equity research shows, while the infrastructure is still there regardless of how old it is, its "drill baby drill" to increase their profit margins.

According to PAC Partners:

‘Domestic supply is also set to shrink as Otway and Gippsland Basin fields move into rapid decline. This leaves under-utilised gas facilities and pipelines. We see this as an opportunity for new field discoveries to take advantage of market and infrastructure opportunities.’

The disturbing consequence, on the back of the Greens’ misinformation, is the letter-writing by communities to let Wade Noonan know about the supposed ruse.

These are the comments from one of such community letters sent to Wade Noonan:

Despite what the proponents of this gas extraction business would say, there is more than adequate supply of gas in offshore wells run by BHP off Gippsland, without the severe impacts to current and future land use…

There are suggestions being put forward by lobbyists for the fracking industry that they might accept the banning of unconventional gas but accept conventional onshore gas wells...

Little do they know that the Victorian State and Federal Government have been complicit in the pretence that conventional gas extraction by Esso in Gippsland waters is harmless. Studies were started, stopped, reports and recommendations hidden and data monitoring deliberately ceased.

Because conventional oil and gas extraction also removes formation water, the onshore groundwater levels in Latrobe Aquifer have dropped by 50 metres. Our creeks and springs have dried up, artesian wells have stopped flowing and the water in many areas is hypersaline. Coastal land is sinking, dunes are gone and for some areas trees are dying. Farmers have lost productivity and are under enormous financial stress.

Gas industry in Oz is lurching into oblivion. Is the Coalition starting to wake up? @CycloneCharlie8 @independentaus https://t.co/MRypDlE26s

Groundwater levels were so impacted that the Victoria State and Federal governments set a precedent and paid out millions to Yarram farmers after commissioning a report by CSIRO. Ironically, under Frydenberg’s stewardship, it is Gippsland that should have the water trigger implemented because sea-level rising will be an addition to coastal subsidence. Result? Gippsland cops the double whammy.

Due to increasing seismic activity in Gippsland waters, you can also add a tsunami impact to the communities of Warrnambool, Portland, Lakes Entrance and Mallacoota if the southern shelf in Bass Strait slips. Just how smart would the Feds be if they allow the Chinese to buy into gas fields in deep Bass Strait water, as is rumoured, or BP’s assault in the Great Australian Bight?

Frydenberg can no longer rely on his precious ACCC report  for the upcoming COAG meeting to bully Victorian into submission as it is an economic report devoid of full cost analysis and risk implications.

‘We are not talking about the economy vs the environment, we have to get out of that mindset.'

Yes, we are Josh. Time to fess up and remove this uncertainty so real investment can start in renewables.

It all comes down to water and not acknowledging the science has given ESSO a licence to steal it.

Get the inside intel! Subscribe to IA for just $5.