The Gaia Hypothesis has just turned forty and, not only did she go without a present, she copped a load of domestic abuse as well, says Guy Lane. 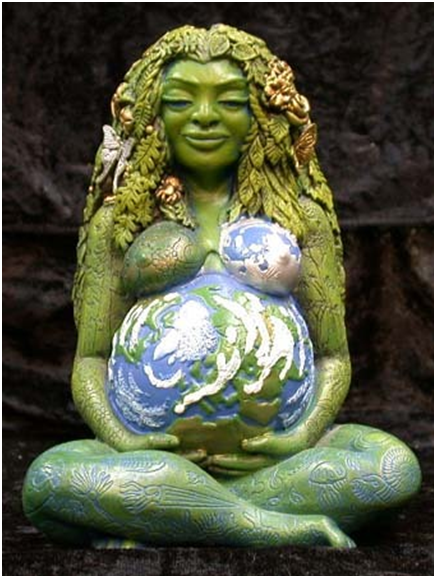 
‘Patience is a virtue, get it if you can; it is seldom in a woman and never in a man.’

We can only hope Ms. Gaia (of the famous Gaia Hypothesis) is taking this advice because her patience would rightly be running thin this year.

This is because Ms. Gaia just had her 40th birthday and, not only did she receive no present, she copped a load of abuse, as well.

The Gaia Hypothesis (now called Gaia Theory) is a ground-breaking scientific proposal that the biosphere exhibits some behaviour consistent with it being a single, living super-organism.

Gaia states that Earth’s living organisms create ‘homeostasis’ by tweaking the chemical composition of the ocean and the atmosphere so that it is just right for their requirements.

The theory was developed by James Lovelock while he was working with NASA on the Viking program, developing systems to detect life on Mars.

Living organisms, he claimed, would alter the composition of the Martian atmosphere causing a chemical disequilibrium.

Instead, the lifeless Martian atmosphere was found to be in chemical equilibrium — stable, with just a wisp of CO2.

Lovelock’s neighbour, the novelist William Golding,suggested that Lovelock’s developing ideas should be named Gaia, after the Greek Goddess of the Earth.

A1973 paper co-written by Lovelock and marine biologist Lynn Margulis – Atmospheric homeostasis by and for the biosphere: the Gaia hypothesis–launched Gaia to the world.

Forty years on, research into and debate about Gaia continues.

However, despite the ‘geo-physiology’ of Earth’s living systems being well understood, Gaia didn’t get a much needed birthday present.

A birthday present for a stressed biosphere could take the form of man-made infrastructure to support an endangered habitat or to reduce environmental pressures.

A thousand hectares of an artificial substrate to help rebuild coral reefs might, for example, be a nice gift.

Or a million hectares of soil innoculated with micro-organisms to facilitate the growth of soil carbon.

Or a gigalitre per day algae biofuel production facility to reduce 6 per cent of the global consumption of crude oil.

Instead, what did Ms. Gaia get for her birthday?

Nothing but abuse — and lots of it.

Instead of a nice breakfast in bed and a bunch of roses, Ms Gaia copped 300 tons a day of highly irradiated water from Fukushima; 82 million tons of carbon pollution and an extra 191,000 humans to feed, clothe and – worst of all – keep entertained.

And a whole lot more besides.

For Gaia, life didn’t begin at 40, it just ground on as before.

And this leads one to wonder, how much more abuse can she take before Gaia quits the household and never comes back?

Her bags are packed and she could leave at any moment; this would be bad news for the humans indeed.

Let us consider the implications of Ms Gaia’s departure.

Gaia is proposed to be an ‘emergent property’ that naturally comes about from the complexity of the biosphere.

In particular, what emerges from the biosphere is the maintenance of the chemistry of the ocean and the atmosphere within boundaries suitable for harbouring life.

In other words, if the humans continue to pollute, chop-down, irradiate, fish-out and dig-up the planet, the biosphere may lose its capacity to self regulate.

With no atmosphere, Earth would be like the moon — frigid on the dark side and baking hot on the sunny side.

To understand how this might happen, consider the mechanism behind ocean acidification and how it relates to plankton.

Besides feeding our seafood, plankton release a volatile sulfur compound called ‘dimethyl sulfide’ that acts as a ‘cloud condensation nuclei’

As such, plankton make clouds and help control the climate.

If the plankton die off, as is likely to happen by the end of the century, not only will there be no more coral trout and red emperor, but clouds might be in short supply as well.

Plus, as plankton also produce 50 to 85 per cent of the atmosphere’s oxygen, we might run out of breath, too.

Ocean acidification is only one of a long list of similar mechanisms by which the planet’s homeostasis could be lost.

In fact, with no real signs of the humans on planet Earth shifting to plan B, we can only hope is that Ms Gaia is getting more patient as she ages.

Read more by Guy Lane at his website guylane.com.