IF AUSTRALIA's new Prime Minister and refreshed front bench are showing signs of being more progressive about renewable energy investment and R&D, it looks like they are also going to be far more candid about coal, and their plans to invest heavily there, too.

In an interview with Fairfax media on Wednesday, the newly sworn in energy and resources minister Josh Frydenberg was crystal clear on the government’s intent to use taxpayer money from its $5 billion Northern Infrastructure Fund to help get the Adani-owned Carmichael coal mining project off the ground.

And he was equally clear that the Turnbull Government’s attitude to developing new coal projects – despite the smart money being on all untapped fossil fuel resources staying in the ground, and despite the fact that most banks and institutional investors won’t touch the Galilee Basin project with a 10 foot barge pole – remains the same as the Abbott Government’s. Frydenberg told the AFR, repeating the mantra of his former boss:

[Carmichael coal mine is] a very important project, which will see significant investment in Australia and provide electricity to millions of people in the developing world,”

Anti-development activism can create major delays in projects and send investment offshore, and you have to be very conscious of that when there are such large time frames involved and we are competing internationally for investment in this country.

The trouble is, the sort of investment Frydenberg sees Australia competing for is looking more like divestment to the rest of the world, with a new report showing that there is now an 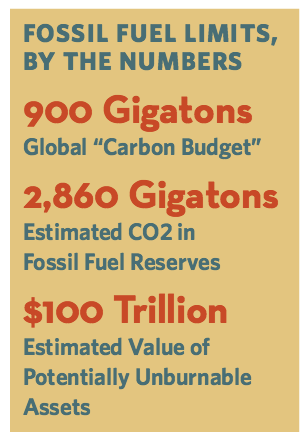 estimated $2.6 trillion in coal, gas and other fossil fuel assets set to be dumped from the investment portfolios of 430 institutions and 2,040 individuals around the world.

As we report here, the data from U.S. consultancy Arabella Advisors reflects the increasingly convincing economic argument for avoiding fossil fuel investments, as the world’s carbon budget tightens in the fight against climate change, and as renewable energy technologies fall in cost.

Or as the managing director of SRI Wealth Management Group, Thomas Van Dyck, put its:

The Arabella Report shows that more and more investors are reducing their carbon risk today and diversifying their portfolios with the goal to harness the upside in the sustainable clean growth industries of the future.

That underscores what I see every day as a financial advisor–that the demand for fossil-free investment products is increasing.

The Abbott Government, of course, never quite caught on to this investment trend.

Turnbull, a one-time merchant banker, appears to see the upside to investment in renewable energy. But his energy minister’s comments about Carmichael suggest the Coalition is still blinkered to the growing list of serious downsides – not least of all for the earth’s climate – attached to investment in new coal mines.

Interestingly, new research from The Australia Insitute shows that the Coalition government is increasingly on its own in this regard, with between 65 and 78 per cent of voters showing support for the redirection of government subsidies for the fossil fuel and mining industries – currently totalling about $7 billion a year – into essential services like education and health.

TAI said on Wednesday that a survey had asked voters across Australia, and in several key electorates,

‘Would you support or oppose taking the subsidies that federal and state government currently give to the mining industry and redirecting them to essential services like hospitals and schools?’

Frydenberg would be out of favour if he helps subsidise Adani #coal mine @TheAusInstitute research: http://t.co/mQ2kx8WutG

Whether in the coal mining seat of Newcastle (69% support), the regional seat of New England (76%) or the bellwether seat Eden Monaro (77%) — it’s clear that voters prioritise services over subsidies to mining and fossil fuels.

The polling shows that Malcolm Turnbull and his new Minister have an opportunity to embrace new economic leadership that would simultaneously be popular, good for the budget and the economy.”

It’s refreshing that Malcolm Turnbull is not the anti-renewable energy activist that Tony Abbott was, but a big new subsidy for coal would clearly undermine the new PM’s climate credentials.

This story was originally published in RenewEconomy yesterday under the title 'Frydenberg coal comments signal no change to Coalition fossil fuel plans' and has been republished with permission.

Keep a close eye on the COAL-ition. Subscribe to IA for just $5.