Facing extinction in the land of denial

It’s time politicians confronted the reality that unless they act on global warming, 70 per cent of our species will become extinct if temperatures increase by 3°C, warns Lyn Bender.

IT IS ONLY when they fear for their seats that politicians are prepared to act on climate change? They would do well to remember that the electoral cycle is only three years long but extinction is forever.

As Elizabeth Kolbert says in her book The Sixth Extinction.

More terrifying is the fact that it’s not just frogs, bees and polar bears in peril. We humans may be facing our own severe depopulation. We have outgrown this earth but there is nowhere else for us to go.

This looming calamity is manmade. 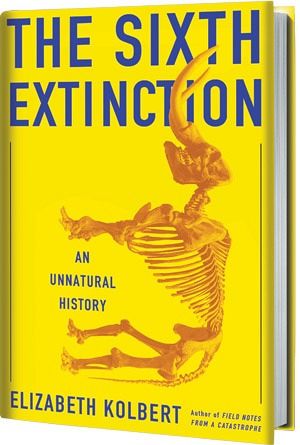 Elizabeth Kolbert, author and science journalist with The New Yorker, has come to deliver this message at The Melbourne Writers Festival. She says many audiences get angry with her because after her dire revelations, she provides no simple solution. Kolbert is a messenger who frequently gets shot. But she adds – by way of encouragement – when it comes to climate change, there is bad and much worse.

International agreement was reached in the Copenhagen Accord to keep warming this century to 2º Celsius. The difference between two degrees and four degrees celsius of warming is the end of civilization.

I was live tweeting at the Sixth Extinction event.

A follower tweeted in response.

‪@Lynestel our elephants, tigers, lions, will be extinct soon if we don't do anything aggressive to protect them.

At this point, Kolbert states: soon there may be no large mammals left in the wild.

“Are any species likely to adapt and thrive?”

“Jellyfish,” I whisper to the stranger next to me, just as Kolbert declares:

“It won't be a world of our choosing, for those of our species who may survive.”

We may not enjoy the company. Kolbert offers no false comfort, miraculous adaptations, or a new flowering of amazing species. She has been at this work too long for that. Her previous book title is self explanatory: Field Notes from A Catastrophe: A Frontline Report on Climate Change.

There is so much warming CO2 in the pipeline that we are probably in the sixth extinction. Low-energy light bulbs and household recycling are not going to save big mammals. At this point, I am sinking in my front row seat and have taken on the same haunted, unsmiling visage that I had noted in Kolbert. The chair, a science journalist, asks:

“You meet many scientists. So how are scientists feeling? Frustrated hopeful?”

It is almost a plea, from the moderator, who is in the full bloom of pregnancy. Kolbert does not soften the blow.

“Horrified. They are horrified.”

Population and consumption of resources are a big part of the extinction story, as are human-polluting behaviours and destruction of habitats.

Kolbert tells and writes stories. She is part of a long tradition of Cassandras — the ancient Greek goddess, blessed with prophesy but cursed with not being heeded. The theatre for this storytelling overlooks the Melbourne Arts Centre and treed banks of the Yarra River. Ducks, swans and happy, oblivious people are in view, enjoying the early spring.

Kolbert has trekked rainforests of Central America with scientists in search of the dying Panamanian golden frog. Her investigations have taken her to the Andes and to our own Great Barrier Reef. But – as she warns us – much biodiversity loss is occurring in our own backyards. 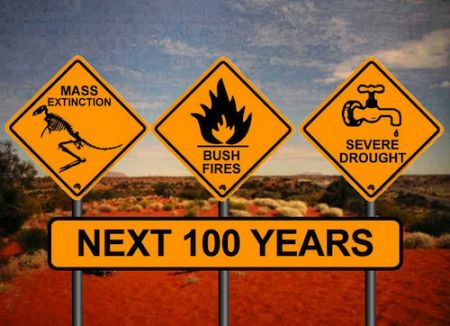 Her book is a sobering chronicle of the disaster that human greed, neglect and stupidity is relentlessly and inexorably bringing. But Kolbert also wants to convey the beauty and fragility of our planet. Just as science is discovering the truth about the five previous mass extinctions, we find ourselves on the brink of the sixth. Paradoxically, it is a vibrant book to read.

Kolbert’s thirteen chapters each begin with an account of disappeared, or disappearing species. Her love of science and admiration of its warriors for conservation shines through.

I am not feeling the love for our own Australian Government — the ‘warriors of denial’. That very morning, the media had been abuzz in the wake of the release of the Renewable Energy Target (RET) Review Report. The “review” was prepared by a panel of experts – in denial – and chaired by self ‘outed’ climate sceptic (read as ignoramus), Dick Warburton. Many have called it a sham. Greens’ leader Christine Milne’s response was:

“This report is climate denier drivel and should be binned.”

Sandi Keane described the review in Independent Australia as farcical, and orchestrated to produce a pre-determined outcome: the trashing of the renewables industry to support fossil fuels. The review even declares that emissions have been reduced under the RET and will rise with its demise.

My report on axing the #RET - a carefully orchestrated plan to appease the Coalition’s paymasters @independentaus http://t.co/OCc10vUegn

Kolbert has communicated her message many times, explaining what climate change is doing to biodiversity and acidifying oceans. She is at a loss to explain why humans seem not to care about their only home — the planet they inhabit. She does however hold out some hope that we can change. What is in danger, is not that all humans may go the way of the dinosaurs – although this may be possible in an uninhabitable earth  but that we face societal extinction.

Kolbert signs my copy of her book, that has taken years to write: “Years of anguish” she confides.

In the atmosphere-controlled theatre, I felt the cold gloom descend. An older man asked rhetorically:

“We in the rich countries may be protected by our air conditioning and desalination plants…[“You wish” I mutter]... but what can we do?”

I am less sanguine about our protection. Hurricane Katrina has shown how easily societal order descends into chaos. How slender a veneer is our safe, civilized existence.

The second speaker, Kelly O’Shannasy, CEO of The Australian Conservation Foundation, seems to bounce upon the podium although she remains seated. She asks us to imagine the earth as a basketball and the relative thickness of its atmosphere as a thin layer of plastic wrap. The atmosphere is the earth’s essential regulator that preserves our just-right-planet.

Kelly's rallying call to start applying pressure at grassroots level, especially in the marginal seats, is infectious. We know that politicians are slowest to move towards change. But ironically, numb to the loss of biodiversity, politicians fear the loss of their seats.

In my therapy work, nothing changes, until the reality of a problem is grasped. Another dictum of therapy is that mourning for what has been lost allows us to go on. Kolbert is our ‘therapist’, urging us not to hide beneath denial.

What kind of world will we live in, with 70 per cent of species extinct at three degrees Celsius of warming?

Kolbert urges us to confront reality, make the big changes and fight for what can be saved.