ON 17 JUNE 2022, Save Our Spit Alliance (SOSA) was alerted to a post on the "Gold Coast Oceanway" Facebook page which stated that Queensland State Environment Minister and Member for Gaven Meaghan Scanlon had:

'…confirmed the Oceanway will be extended between Philip Park and the Seaway as an accessible concrete path via the existing eastern pathway through the Federation Walk Coastal Reserve.'

The Gold Coast Oceanway is a controversial pathway proposal (partly finished) to run a concrete "shared" path the length of the Gold Coast beachfront — from Duranbah in the south to the top of the Seaway wall in the north.

The Oceanway section for the Spit is a City of Gold Coast-led (COGC) project that is being funded by the Department of State Development (DSD), through the Spit Master Plan (SMP) process.

One proposal is to run a three-kilometre concrete section from north of the Philip Park Car Park that will traverse the littoral rainforest, protected wildlife habitat and primary dunes of Federation Walk Coastal Reserve — paths that are currently made of crushed compacted gravel on a compacted sand base.

The Qld Environment Minister approves extending a concrete path through sand dunes at the Spit.

The statement from the Queensland Environment Minister as featured above is at complete odds with the information provided to SOSA and other community representatives who have been engaged with the DSD, Gold Coast Waterways Authority (GCWA), and COGC teams facilitating this section of the Spit Master Plan over the past 12 months.

There has been much debate in these meetings about the detriment to the natural environment that concrete paths will cause in the Federation Walk area, along with potential damage to the primary sand dunes and concerns for the safety of pedestrians being protected from electric bikes and scooters, and high-speed cyclists who can reach dangerous speeds on concrete paths.

A quick search of Minister Scanlon’s social media, her webpage and the Department of Environment and Science site shows no information, media releases, or quotes to support the comment in the post.

Similarly, nothing appears on the GCWA site or social media pages, or on the DSD website (although, the DSD site has a picture of a raised wooden boardwalk – not a scrap of concrete in sight – in reference to the Oceanway traversing the dunes) to support that quote.

Lastly, nothing appears on City of Gold Coast social media or websites to confirm this statement.

The statement in question

So, where has this absurd, incorrect statement come from, if not from Minister Scanlon?

A quick scan of the Gold Coast Oceanway Facebook page reveals plenty. With 74 odd followers and the first posting in 2011, the page appears to lie dormant for eight years, before posting begins again in 2019. It then ramps up in late 2021 as segments of the Oceanway start coming together. (From 2012 to 2019, Gold Coast Mayor Tom Tate blocked the continuation of the Oceanway through Mermaid Beach and Surfers Paradise.)

The phone number used as a contact on the Gold Coast Oceanway Facebook page is disconnected, but a basic search reveals that prior to disconnection, it was the contact number for the former Gold Coast Tourism Corporation — now known as Destination Gold Coast (DGC). 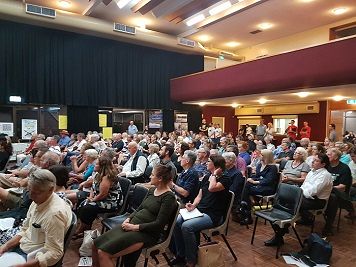 A secretive and allegedly corrupt Gold Coast City Council is riding roughshod over citizens and the City Plan in a frenetic drive for developer dollars.

DGC is the Council Of Gold Coast/industry-funded destination management organisation for the region. The number appears on several sites related to one address – goldcoastqld.com.au – which appears to be a tourism site for various listings statewide. It links to "verygc.com" (a former failed marketing campaign of Gold Coast Tourism Corporation) and other DGC sites. The site address is also very similar to the official site of the COGC and its related emails (for example, goldcoast.qld.gov.au).

Is it just a random member of society that loves the Oceanway? Is it the City of Gold Coast? Is it Destination Gold Coast and they just haven’t declared it?

Or is it another fake community group, possibly created by anonymous suits in council to support environmentally unsustainable projects like the failed “Future Jobs for Our Kids” group? (The group had only one member in 2016 and was bankrolled by the mayoral office – using ratepayers’ money – to support a cruise ship terminal being built at the Spit.)

Or how about the fake “Better Our Spit” community group (formed with Chinese-owned consortium ASF Group through the failed Shac Communications group to support ASF’s potential takeover and destruction of The Broadwater in 2016–2017), which lobbied for highrise towers on the Spit in the three-storey maximum height zone?

Regardless of who is running the Gold Coast Oceanway Facebook page, anyone blatantly lying in a public forum by attributing a false statement to a state member of parliament a statement that deals with government processes outside the minister’s scope should be held to further scrutiny, and a formal investigation. (The Department of Environment has limited control over aspects of the Spit Masterplan and its implementation.)

And if it is someone linked to Destination Gold Coast, then surely deliberately undermining the integrity of a state minister is something that the local government ombudsman and/or the Crime and Corruption Commission Queensland (CCC) should be looking into, as DGC is a council-controlled and funded entity.

This is about community

The bulldozing and removal of coastal vegetation and wildlife habitat in order to construct a concrete Oceanway path through Federation Walk Coastal Reserve (gazetted by the state as 'reserve for park, environment, beach protection and coastal management purposes') is a contentious issue.

Out of respect for the local community, it shouldn’t be trivialised by returning to the long out-of-date, shady social media tactics of former members of the Mayor’s staff so as to undermine the Queensland State Government and its agencies, or to subvert the community engagement process.

SOSA will continue to push for environmentally sustainable and responsible options (no concrete) for all paths traversing through Federation Walk, whether they are part of the Oceanway or not.

Since becoming aware of the "Oceanway" post on 17 June 2022, SOSA representatives made discreet enquiries with Queensland State Government authorities regarding the nature of the information contained. These authorities have confirmed that there was no statement from the Environment Minister on any forum regarding a concrete path as part of the ‘"Oceanway extension" through the Spit.

Just before publishing this article, SOSA became aware that the original post in question has been altered and all references to Minister Scanlon deleted.

Similarly, during that time, the website www.goldcoastqld.com.au and related sites appear to have disappeared completely from the internet.

Make of that what you will.