A new report explores the democratising of renewable energies through the advancement of "big data". RenewEconomy's Giles Parkinson reports.

GLOBAL investment bank Citi is predicting that the combination of near zero-variable cost energy sources such as solar and wind, along with smart analytics and “big data”, may deliver what the nuclear industry promised nearly half a century ago — free energy.

Citi writes in the latest of its 'Disruptive Innovations' series, in a section focusing on big data and the energy industry (p15):

'The notion of free energy came to prominence in the 1960s, as nuclear fusion was touted as a way to provide free energy.'

When those claims were made about nuclear fusion, the technology was in the embryonic stage and it turned out nuclear energy wasn’t free at all but incredibly expensive — and getting more so by the year.

But wind and solar, along with demand and storage optimisation, may finally deliver on that promise. In the report(p15), Citi says:

Big Data and advanced analytics are developing rapidly to improve forecasting, automation, customisation, and the democratisation of energy.

The end result is that we are producing more energy with fewer resources ….. the goal of dramatically lowering energy costs for all, with the possibility of free energy in some corners, may finally come to fruition.

The Thwack of Big Data and Software to Democratize Solar, Wind and Storagehttps://t.co/phbXFJNtOF#bigdata #Solar #renewables #software

Citi is not the only research institution making such forecasts but it is in sharp contrast to the general public discussion in Australia, which is dominated by those who insist that the old centralised energy system – slow, inefficient and expensive – will not and cannot be replaced by new technologies.

South Australia is now the focus of that debate, and the push-back against wind and solar by conservatives and, of course, vested interests, seeking to protect their sunk assets is striking.

But Australia is already well down the path to this transformation, given its high level of rooftop solar and the fact that it is considered to be the world-leading market for household battery storage and smart software.

Citi says this “democratisation” of energy could see renewables and distributed energy resources (DERs) proliferate at the local level and that will mean fewer new power plants.

Consumers could eventually “trade” energy with others, in the form of “transactive energy” — a concept that is already being trialled by utilities and community energy groups in Australia.

This, of course, has profound implications for current energy industry business models. Instead of investing in large fixed assets, as they have done for the best part of a century, Citi suggests the utilities of the future will become distribution service platform providers. 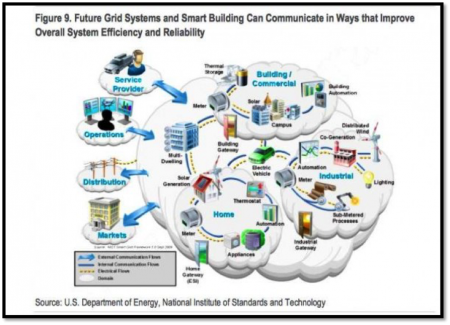 The state of New York is already going down this path through its remarkable REV (Reforming the Energy Vision) programme and some analysts want this model adopted in Australia.

Citi says REV is one of the most ambitious regulations put forth by a regulatory agency in changing the business models of utilities. The focus is entirely on distributed energy, creating the right regulations and rules for the appropriate platform and operations, as well as system integration and operation.

In the distributed, decentralised world, particularly in the electricity space where the supply and demand of electricity has to match instantly, ensuring a smooth and optimal operation of the grid necessarily requires advanced analytics to process the vast amount of data generated.

Technology companies could provide energy network optimising software or even operate platforms and energy companies that transition to providing services could become asset-light, as they could control how energy is routed and optimised.

Citi says the fundamental technologies of solar panels, wind turbines, converters and energy storage have been around for years but having nearly half or more of total electricity supplied by wind or solar was previously thought to be impossible due to grid integration issues.

A lot of this comes down to predictive software.

'Having more precise estimates of renewable generation allows the grid to schedule in the appropriate amount of backup generation and deploy other measures, such as demand-side management.' (Citi report, p15)

One example is the creation of “virtual power plants”, which pool the output and resources of numerous solar and storage arrays that could be located in households, businesses, or CBD buildings or factories.

The software can bring these devices together and operate them as if they were a single power plant. Citi says these are critical because they negate the traditional response to rising demand in an area by building a new centralised power plant or adding new infrastructure.

Recently, the New York regulator denied Con Edison’s request for a US$1 billion (AU$1.33 billion) upgrade in resolving equipment overloading. Instead, ConEd created the BQDM (Brooklyn Queens Demand Management) program that relied on both traditional utility and non-traditional customer/utility improvements at a total estimated cost of only US$200 million (AU$265.29million).

Those sorts of cheaper alternatives are being considered in Australia, but the regulators have been slow to catch on — and when large spending cuts are recommended the regulator is taken to court by the utilities.

Citi says this requires a whole new way of thinking. It would require pricing energy and ancillary services at the neighborhood or an even more micro level.

Producers could tap previously stranded assets and do it quickly; utilities could be winners but only if they transform with the times; renewables, despite intermittencies, could operate as smoothly as traditional fossil energy; emissions should be limited as energy demand is optimized and renewables proliferate. Trillions of dollars are at stake.

This is a story of how software will transform a hardware-dominated sector; it is the kind of creative destruction that demands fundamental changes in an entire sector.

This article was originally published in RenewEconomy on 1 August 2016 and has been republished with permission. You can follow Giles on Twitter @GilesParkinson.

Renewables are the answer but how much damage will we cause before we make the transition? Asks Stuart Andrews. https://t.co/HpWsN5zYjU