By The Conversation | 4 April 2013, 8:13am | comments |
Extreme weather caused by global warming poses a growing risk to Australia’s crop lands, cities and iconic sites, according to a new report, writes Sunanda Creagh from The Conversation. 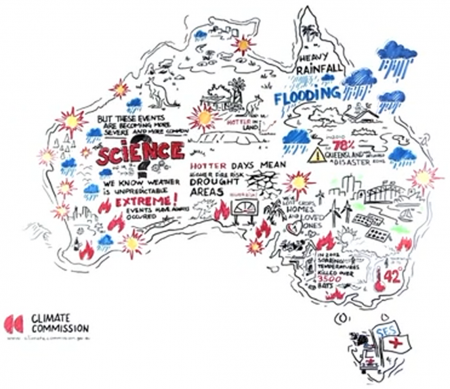 EXTREME WEATHER caused by global warming poses a growing risk to Australia’s crop lands, cities and iconic sites like Kakadu National Park, according to a new report that calls for global emissions to be cut to almost zero by 2050.

The report, and an accompanying video, was produced by the government’s official advisory body on global warming, the Climate Commission, and aims to put the latest scientific data on extreme weather events into plain English.

A video, Climate Change Fuelling Wilder Weather, released by the Climate Commission to accompany the report

The new report, The Critical Decade: Extreme Weather, said that climate change was causing more heatwaves, bushfires, and sea-level rises, as well as heavier rainfall in some areas but drought in others.

“Key food-growing regions across the southeast and the southwest are likely to experience more drought in the future,” the report said.

“Some of Australia’s iconic ecosystems are threatened by climate change. Over the past three decades the Great Barrier Reef has suffered repeated bleaching events from underwater heatwaves. The freshwater wetlands of Kakadu National Park are at risk from saltwater intrusion due to rising sea level.”

“The decisions we make this decade will largely determine the severity of climate change and its influence on extreme events that our grandchildren will experience. This is the critical decade to get on with the job,” the report said.

“Globally, emissions must be cut rapidly and deeply to nearly zero by 2050, with Australia playing its part.”

“For the first time, this report is looking thoroughly and in great detail at the range of extreme events that have affected Australians but importantly it looks at how the nature of these extreme events has shifted,” he said.

“This is the first report we know of that puts it in accessible language and not scientific jargon — what’s happening, why things are shifting and what we might expect in future.”

Professor Steffen said the report would be of use to members of the public but also urban planners and emergency services officials preparing for a future in which heatwaves, bushfire, floods and other extreme weather events are more common.

Dr Sophie Lewis, a Postdoctoral Research Fellow investigating climate change at the University of Melbourne, said the report takes “a systematic look at a suite of different extreme weather events in Australia, from heatwaves through to droughts and heavy rainfall.”

“It shows that these events have already been influenced by human-related climate change. The changes we are now seeing in extreme weather will only become more intense in the coming decades unless we take rapid action now,” she said.

“Its findings are novel, in that it shows how we are already seeing the impact of climate change day-to-day in different types of events and that they are likely to become rapidly worse in the coming decades.”

The new report is the Climate Commission’s 24th publication but John Cook, Climate Communication Fellow at the University of Queensland, said there was value in repeating the message.

“I am sure the scientists are getting sick of repeating themselves and people paying attention are sick to death of hearing it but for much of the public, they are hearing it for the first time. So I think there is a real value in these reports,” he said.

“We’ve done studies showing that if you ask the general public, the average member of the public would say that less than 50% of scientists agree about the basic fact that humans are causing climate change, even though the consensus among climate scientists is 97%. So even though we are saying it over and over again, there’s a huge gap between reality and the public perception.”

Professor Steve Sherwood, Director of the Climate Change Research Centre at the University of New South Wales, said the main findings in the report are not new and are in line with the conclusions of researchers around the world studying the topic.

“However, the report is unique in providing an easily readable and comprehensive view of how extreme events are changing, and will change further, in Australia,” he said.

“International reports such as those of the Intergovernmental Panel on Climate Change are much harder for the average person to penetrate, have less relevant detail on Australia, and don’t go as far to help the reader ‘connect the dots’ — so this new report looks like a very useful addition to the mix.”