Citigroup estimates that unless the world switches from fossil fuels, based on current market prices we'll be left with an eye-watering US$100 trillion in stranded assets. RenewEconomy's Giles Parkinson reports.

IF YOU hear a lot of noise about climate policies and climate action over the next few months in the lead up to the Paris climate conference, it is because there is a lot at stake. According to Citigroup analysts: US$100 trillion of potential stranded assets in the fossil fuel industry.

A new Citigroup report values the fossil fuel reserves that need to be left in the ground if the world is to meet its targets of trying to limit global warming to 2°C — a target that, according to a new Climate Council report, is actually a lot less “safe” for humankind than the science thought it was just ten years ago.

Nevertheless, that is the stated target of all governments – including Australia’s – and Paris will endeavour to put in place a mechanism that will allow the world to meet that goal.

But if the world is serious about meeting this target, it needs to respect its “carbon budget” — and that calls for one-third of global oil reserves, one half of global gas reserves, and 80 per cent of global coal reserves to remain in the ground.

This graph sums up the findings of a new analysis published this year in Nature by McGlade and Ekins. The green represents the percentage of the various fossil fuel types that could be extracted under a 2°C scenario.

Translating that into dollar terms and using metrics of US$70 per barrel of oil, US$6.50/MMBTU of gas (an average weighted price of U.S., European and Asian prices) and US$70 per tonne of coal, that amounts to a lot of money.

Citigroup notes in the report:

'We estimate that the total value of stranded assets could be over $US100 trillion based on current market prices.'

And coal bears the brunt, accounting for more than half the value of stranded assets, even in the unlikely event that carbon capture and storage becomes a viable technology.

Citrigroup does note that some of these assets have not – and probably will not – be developed because it is no longer economic to do so in many cases.

'But it is still a vast number, and is more important when considering the growth/capex/returns potential of associated companies, and the impact on the economies, balances of payments etc. of the countries where those assets lie.'

Citi says coal companies are already experiencing some considerable stress, as can be seen from the dramatic fall in seaborne thermal coal prices, and the slump in market capitalisation represented in the graph below.

Still, Citigroup says, the response of the coal industry

'... could be best described as optimistic and hopeful.' 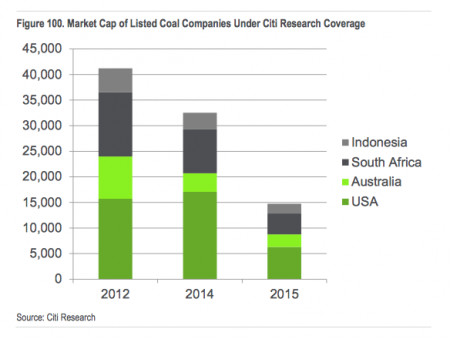 According to Citigroup, the fossil fuel industry is:

optimistic that demand will pick up and prices with it, and hopeful that ‘clean coal’ technology will become available and save the day. On the demand side we think thermal coal is cyclically and structurally challenged and that current market conditions are likely to persist.

This in our view will force the companies to take dramatic actions; the large diversified mining companies such as Rio Tinto, Anglo American and BHP Billiton have either been exiting thermal coal operations or significantly rationalizing their businesses. The pure play or heavily exposed mining companies appear to want to ride out the storm.

The one potential ‘game changer’ and blue sky scenario for coal rests in CCS, but Citigroup says the timeframe for commercial success “may be beyond the survival window for a lot of the coal mining companies.” It notes: 'The industry is, in our opinion, in a something of an existential race to develop CCS within its survivability timeframe.'

Ironically, Citigroup says, the coal industry may need support or bail outs from governments, though the appetite for rescuing the industry both economically and politically appears limited.

That would be with the exception of Australia, which still seems determined to invest billions to help develop the massive coal resources in the Galilee Basin and where the Abbott Government is talking with the Labor State Government in Queensland about funding a rail line for the coal exports.

Joe Hockey wants to build #Adani a railway to nowhere, my piece in the @canberratimes http://t.co/vtXLXY0yii

Citigroup says it is confident of a good outcome in Paris, despite failures in the past, notably in Copenhagen:

This time it feels different — countries including all the big emitters seem to be coming to the table with positively aligned intentions, against a backdrop of an improving global economy, and with public opinion broadly supportive.

Paris offers a generational opportunity; one that we believe should be firmly grasped with both hands.

That means, though, that policymakers and investors and corporates will have to think outside the box to provide the vast amounts of capital required in different.

'There is enormous investor demand for low carbon investment, with investor groups representing tens of trillions of dollars under management committed to investing in a more environmentally friendly manner. The stumbling block to date has been the lack of, and in particular the quality of many of the investment opportunities available.'

This story was originally published in RenewEconomy on 25/08/15 and has been republished with permission. You can follow Giles on Twitter @GilesParkinson.

The John Graham image featured in this piece may be purchased from the IA store.

For for updates on how the Abbott government is destroying the renewables industry, subscribe to IA for just $5.