Mention Byron Bay almost anywhere in the western world and there’s often an immediate reaction. Many people have either been or are intending to visit. The mythology of Byron Bay is heavily promoted by the tourist industry, the NSW Government and mega-festivals as a “spiritual, green hub of creativity and innovation".

The Shire is now an international destination, with a “Green Mayor” and a “Green Council” overseeing the rise of this shining environmental star.

With its beautiful beaches, tropical rainforests and wildlife, Byron sits under the gaze of Mount Warning, an ancient volcano where the morning sun first touches the Australian East Coast. Sounds like paradise, doesn’t it?

Nothing could be further from the truth. Byron is on the verge of ruin. Over-sold, over-promoted, incapable of dealing with two million tourists annually, 15,500 ratepayers are being firmly told by Byron Council to fork out a 12.5% increase in rates to cover the cost of infrastructure damage. The completion of the Pacific Highway has opened the Shire up to thousands of Queenslanders, who descend on weekends.

There’s talk among locals that perhaps Byron should follow President Trump’s example and build a wall between Byron and South-East Queensland.

Mega-festivals entrap the population with the Bluesfest to the south, Splendour in the Grass and Falls festivals at the northern end of the Shire.

In the good old days, the Bluesfest ran once a year in Red Devil Park, with around 17,000 patrons. Once a new venue at Tyagarah was obtained, the festival now attracts annual audiences of over 101,000 patrons across five days. According to the website, 49% of patrons come from outside NSW. In spite of promises to the community, the organisers have now gained approval for a further 100 festival days a year.

Splendour and Falls festivals, recently sold to the U.S. entertainment giant Live Nation, are seeking approval from the NSW Government to be declared a State Signficant Development, with 12 x 50,000 patron events and 8 x 25,000 patron events annually. The existing cap on numbers is 35,000.

The community shudders at the prospect of such a massive invasion of festival goers, who already leave the festivals’ Yelgun site and the Shire in a dire situation. Residents complain of mountains of rubbish dumped at beaches and parks (see below image) by festival goers, with faeces and booze bottles discarded wherever. 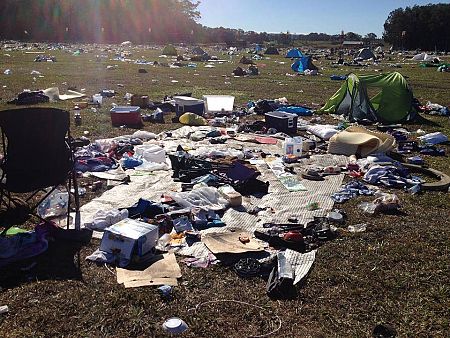 Faced with huge queues in cafes, post offices, banks and supermarkets, no parking spaces and lengthy delays in getting to appointments and work, residents are fed up.

One resident who complained to Mayor Simon Richardson about the festival invasion was smartly put in their place:

“We should stop festivals? Is that your ultimate wish? Take $100 million out of locals pockets, shed the creative industries employment for locals? Close our doors to visitors? Try and return to the 80s? Because the patrons have the gall to swim in your river and make you queue for a latte’ in the peak of summer season? We couldn’t do so, even if we wished, for something so selfish."

Unfortunately, most residents checking out their pockets would find them bare. With no cost benefit analysis of the loss of amenity, the damage to infrastructure, it’s difficult to make the case for $100 million making its way to local pockets.

Then there’s the elephant in the room. Carbon emissions.

On the Byron Council website, there’s a message from the mayor on this issue:

Byron Shire has set a goal to become Australia's first Zero Emissions community. The new goal has come about as a result of a recent visit by Beyond Zero Emissions to Byron Bay. Mayor Simon Richardson said the offer of support was extended by the internationally renowned organisation and would allow Byron Shire to have access to unprecedented research and specialist resources and apply them in a local context.

The outcomes will build on our recently adopted Byron Shire Low Carbon Strategy, widening it to include the whole community rather than just Council's own operations.

Plus, the new partnership will build on Council and community projects already underway. "This is an opportunity that our community will relish and we are ready for it," he said.

Zero Emissions Byron has undertaken a baseline study, which includes estimating the emissions of the number of vehicles in the Shire. They estimate that some 16,970 passenger vehicles emit an estimated 54,800  tonnes of CO2. However, the traffic generated by festivals and 2 million visitors has been completely ignored. 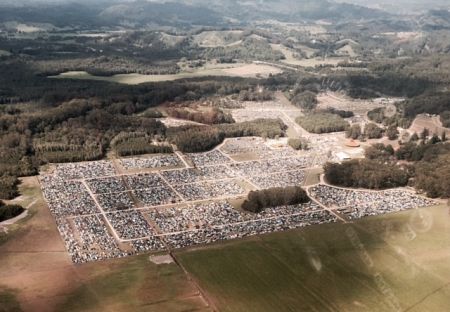 Local journalist John Lewis has estimated any State government approval of Live Nation’s now owned Splendour and Falls festivals will put approximately 800,000 more vehicles on Shire roads alone. Based on the above calculations for vehicles in Zero Emissions Byron, the shire would be more likely become the biggest emitter of carbon emissions in the state.

Beyond Zero Emissions, based in Melbourne, styles its research programs – Zero Carbon Australia and Zero Carbon Communities – as vehicles to show how Australia and Australian local government areas can achieve 10-year reductions of greenhouse gas emissions from the transport, electricity, land use, export, buildings and industry sectors.

In a phone call to Vanessa Petrie, CEO of BZE, she admitted that the mega-festivals current and future traffic was a “bubble” that had not been estimated in terms of carbon emissions. Instead, the focus was on land use, buildings, energy, waste and transport (which didn't include any festival traffic).

Given the flow of traffic on the Pacific Highway, which cuts through Byron Shire, 2 million plus tourists growing exponentially, a potential massive increase in mega-festival numbers, the omission of the causes of carbon emissions in Byron seems more than curious. Even more so, given former Premier Baird’s commitment to set a goal of net zero carbon emissions by 2050 and allocate $500 million over five years to help spur the transition to renewable energy.

The Department of Planning has issued its initial Secretary’s Environmental Assessment Requirements, which is the first  step in declaring Splendour and Falls Festivals as a State Significant Development. This process involves requests to stakeholders, including police, rural fire service, councils, Office of Environmental Heritage and other bureaucracies to provide details of issues which may be relevant in any EIS.

Byron Council has failed to mention carbon emissions, or the extraordinary loss of amenity to the community. No mention is made of the lack of infrastructure to deal with the potential numbers of patrons.

NSW Police have raised serious issues, including that there is no possibility of evacuating the North Byron Parklands (the site of Splendour and Falls festivals) within eight hours at current capacity levels.

Police also note the emergency crowd crush situation at Falls Festival Lorne, expressing the need for a SafeWork NSW audit of the venue to ensure that the risk of such an incident at North Byron Parklands is mitigated.

Are there solutions to the take over of Byron by mega-festivals? Bluesfest promised that there would be a one only festival on site. Splendour and Falls also committed to a five-year trial period and gave an undertaking that the festival sizes would not increase in patron numbers or events. But a community that fought off Club Med and has been tireless in protecting the Shire was sceptical of these undertakings, with good reason. Once established, it was clear that the festival corporations would attempt to establish the case for more events based on the funds spent on site.

In spite of major violations of consent conditions by all Byron based mega-festivals, the NSW Department of Planning has imposed minimal fines. Byron’s future is in the hands of the Berejiklian government. If the record of the Baird government is any guide, the concerns of the community will be ignored. Byron Council’s attempts to impose a bed tax have been rejected by the Government. The community is expected to pay for the privilege of the invasion.

It's a good environment. Subscribe to IA for less than $5 a month.