Sneakily shifting the baseline to 2005 can't fudge the fact that Abbott's target is a mere 20 per cent below 1990 levels (used by UN) or a paltry 8 per cent without land use factors. RenewEconomy's Sophie Vorrath and Giles Parkinson report.

IT IS NOW official: the Abbott Government is aiming for a solid last in global climate action stakes. The Coalition Government confirmed on Tuesday it will set a greenhouse emissions reduction target of a minimum 26 per cent below 2005 levels by 2030, with the possibility of a 28 per cent target as the economic costs become clearer.

The target translates into a 19 per cent cut below 2000 levels by 2030. This is the target that the independent Climate Change Authority (CCA) says Australia should be trying to achieve within 5 years, rather than 15, and it is less than half the 40-60 per cent reductions for 2030 recommended by the CCA.

Of course, little else might have been expected from a government led by a man put into a leadership position by his party’s rump of climate science deniers, and who owes his continued leadership to their support in the mooted palace manoeuvres in February.

It is, after all, a government that has already canned the carbon price, slashed the renewable energy target and dismantled numerous other incentives and institutions. And tried to dismantle the remainder. It may be that we should be surprised that the Coalition has come this far at all.

The Abbott Government is defending its position as “economically responsible”, but already, it is receiving condemnation from analysts, financiers, Pacific Island nations, climate and green groups around Australia, who are describing it as “pathetically inadequate” and “dangerously out of step.” Even business, and particularly the energy sector, wonder how Australia will meet even this modest target with its current policies.

"This is what denial looks like". Australia criticised over watered down emissions cuts http://t.co/j7hpPr1jyu pic.twitter.com/dCN2VwXXQM

In effect, it extends the exceptionalism that Australia sought for itself at the original Kyoto talks in 1997, when it managed to secure an increase in emissions as its target. It remains to be seen how such a target would hinder the climate talks scheduled for Paris this December, but it certainly confirms Australia’s position as a pariah.

Critics say it leaves Australia horribly exposed to the economic and technology changes that are sweeping the world, as evidenced by a new report highlighting how large-scale solar is cheaper than imported coal, and the abandonment of the Adani coal project by the last major bank supporting it.

As you can see in The Climate Institute's table below — the target is particularly out of step when you take into account that 1990 is the base year used by the UN, for measuring against targets. 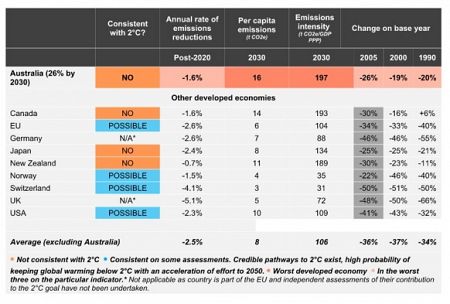 The Abbott Government is the worst performer on two key measures — per capita emissions and emissions intensity. It is in the bottom three of aggregate targets from a range of different years, and on reductions per year.

The Abbott Government is arguing that the effort on a per capita basis is greater than others. Foreign Minister Julie Bishop says that Australia will halve emissions per person over the next fifteen years:

“That is more than any other major economy or any other comparable country.” 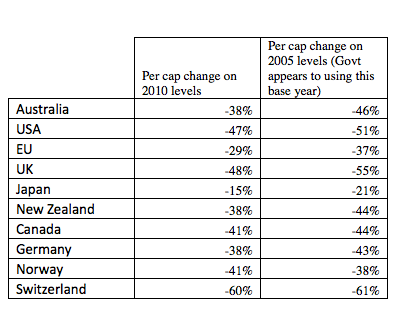 But like its claims on the $660 billion carbon tax and the electricity tax, this is misleading. Another graph from The Climate Institute shows that most other countries are making similar cuts, and some even greater depending on the base year. 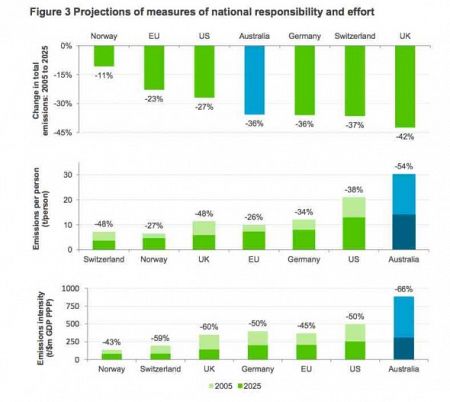 As this graph shows from the Climate Change Authority's presentation earlier this year, Australia is so far behind the rest of the world, a gap that has been widened since it was allowed under Kyoto to increase its emissions by 8 per cent. Even its ambitious targets – a 30 per cent cut below 2000 levels by 2025 – would still leave Australia trailing comparable countries.

Friends of the Earth Australia campaigner, Cam Walker, said  in a statement on Tuesday:

The Abbott government has) benchmarked it’s commitments against some of the worst of the developed nations such as Canada.

The target that they have put on the table is well below the efforts of the USA, China, and UK and nowhere near enough to reduce the risk of catastrophic global warming.

The world is moving, and countries like India and China are making huge investments in renewable energy while Tony Abbott is at war with wind and solar. This government is dangerously out of step on the most pressing issue of the 21st century.

Environment Victoria (EV) said the targets, which it described as “inadequate, reckless and illogical,” had “the dirty fingerprints of Australia’s coal industry” all over them.

The Prime Minister’s proposed 2030 target would make Australia the most polluting developed nation per capita by far in 2030, and prolong our reliance on dirty and outdated energy sources.

While the Coalition defaults to running fear campaigns on everything from renewable energy targets to an emissions trading scheme …it is demonstrating that it is incapable of moving beyond ideological attacks to deliver credible policy to solve one of the greatest challenges Australia has ever faced.

Doctors for the Environment Australia also lamented yesterday's news, but said that what mattered more than the numerical target was the government’s “sincerity and commitment to deliver” — which was in doubt.

The insecurity expressed by many world leaders over Australia’s position results from suspicion that our acceptance of climate change exists only as expediency, for there is a track record of undermining effective action with the repeal of the carbon tax, and curbing of the Renewable Energy Target and wind industry.

We need a government to demonstrate its understanding of science, and display commitment and urgency to make a transition from fossil fuels to clean energy, for only then does any target becomes possible. This is essential to protect the health of our own citizens and millions around the world.

Finally, federal Labor responded to the reported targets with two questions for the government, the answers for which many will be keen to see:

1. How is Abbott’s target in line with his commitment to limit global warming to no more than 2°C? If the Government has modelling to demonstrate this, they should release it immediately; and

2. How much taxpayers’ money will go to big polluters under the Coalition’s Emissions Reduction Fund — the government’s spearhead carbon reduction policy?

One question remains for Labor however. If, like the Coalition, it has signed on to make sure that Australia plays its fair share of meeting the 2°C target, which some say we will probably miss anyway, what are it’s emission reduction targets?

It baulked at endorsing a 50-50 target at the recent Labor conference. Signing up to a 50 per cent renewable energy target was seen as a positive, but it hasn’t yet got its mind around how to sell an ambitious emissions reduction target either.

You can also follow Sophie on Twitter@sophvorrath and Giles @GilesParkinson.

This story was originally published in RenewEconomy on 11/8/15 and has been republished with permission.

Keep an eye on the COALition. Subscribe to IA for just $5.