When Malcolm Turnbull, Julie Bishop and Annastacia Palaszczuk ignore grave letters of concern about the Adani Carmichael mine from the Ocean Elders, one of the most prestigious marine organisations in the world, Australians have a right to be outraged.

The very least they should expect from their leaders is a personal in-depth response to the serious issues raised.

Styling themselves as 'a voice for the ocean' and 'a collective of leaders working with partners to protect, value and celebrate the ocean and its wildlife', Ocean Elders includes such prestigious luminaries as Prince Albert II of Monaco, Queen Noor of Jordan, Jean-Michel Cousteau, founder and former CEO of CNN Ted Turner and Virgin boss Sir Richard Branson. Dr Sylvia Earle is also an Ocean Elder, a former Chief Scientist of the U.S. National Oceanic and Atmospheric Adminstration, well known for the depth of her extraordinary level of experience in marine research.

The only Australian Ocean Elder is Graeme Kelleher, the first Chairman and CEO of the Great Barrier Reef Marine Park Authority, serving in this capacity from 1979 to 1994.

A passionate advocate for the Reef, Graeme Kelleher was instrumental in requesting the support of his fellow Elders when the Carmichael mine proposal gained increasing traction from the Queensland and Commonwealth governments.

One of the first targets of the Elders was a letter to Foreign Minister Julie Bishop. 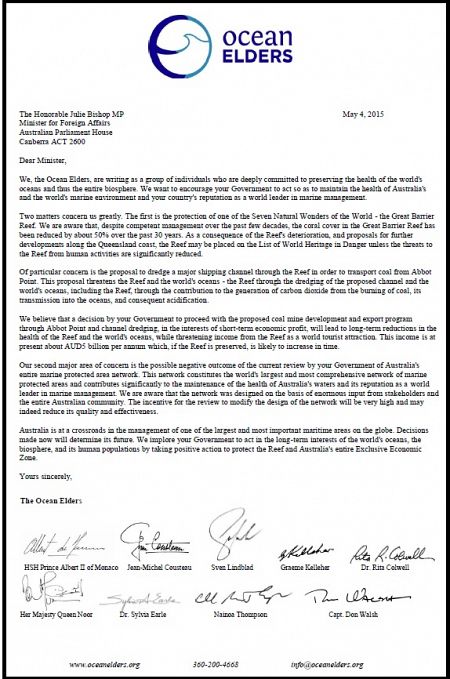 Two matters concern us greatly. The first is the protection of one of the Seven Natural Wonders of the World - the Great Barrier Reef.

As a consequence of the loss of 50% of coral cover over the last 30 years, proposals for further developments along the Queensland coast, the Reef may be placed on the List of World Heritage in Danger unless the threats to the Reef from human activities are significantly reduced.

Of particular concern is the proposal to dredge a major shipping channel through the Reef in order to transport coal from Abbot Point. This proposal threatens the Reef and the world’s oceans – the Reef through dredging of the proposed channel and the world’s oceans, including the Reef, through the contribution to the generation of carbon dioxide from the burning of coal, is transmission into the oceans and consequent acidity.

No response was received.

As the custodian of the Great Barrier reef on behalf of all humanity and future generations, we urge you, the Prime Minister of Australia, to do your utmost, and as soon as possible, to establish national emission reductions consistent with limiting the temperature increase to l.5 degrees of global warming, the target of the 2015 Paris climate summit, and shift national energy policy to phase out coal, the leading contributor to Australia’s emissions, and become a renewable energy based nation. 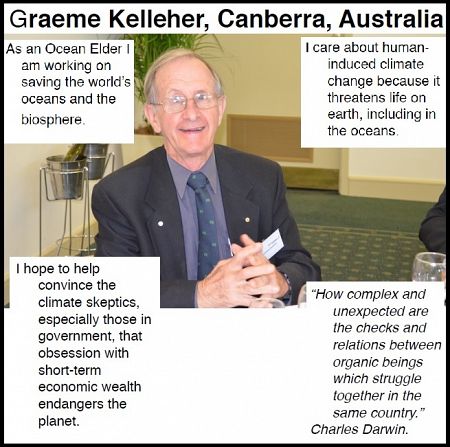 Kelleher explains the impact and links between coal and climate change on coral.

The major cause of coral bleaching of the Reef is temperature increase and absorption of carbon dioxide into the oceans as carbonic acid. Coral cannot survive in acidic conditions. In the 30 years before 2015, the reef had lost 50% of its coral cover as a result of run off, nitrogen and phosphorous from farming on the mainland. Add climate change caused by burning fossil fuel and the results are disastrous for the Reef.

Combining these elements serve to weaken the reef, increased temperatures reduce alkalinity. Coral cannot compete with algae. Algae takes over and you end up with inactive algal reefs.

Coral larvae can travel up to 1500 km, these are the reef building corals.  As water temperature increases over 33 degrees Celsius, these corals are impacted. The whole of the ecosystem is adversely affected, biodiversity will be diminished and any recovery will take tens of thousands of years.

Coal dust has two major effects. If its gets on to the surface of the ocean, it increases absorption of heat and decreases reflection, thus increasing the total rate of climate change.

Coal dust can stay in the water column for ages. Coal cuts down the energy from the sun and corals cannot continue to survive.

In his letter to Premier Palaszczuk of 26 June, 2017, Kelleher implored the Premier to reject the mine, highlighting the fact that Queensland has the highest level of solar heat in Australia.

As the first Chairman and CEO of GBRMPA, I am writing to implore you to reject the proposed Carmichael Mine and support renewable energy projects in Queensland.

Your state has the highest level of solar heat in Australia. It is ideally suited to producing electricity from solar energy.

Coal is bad for humanity and the biosphere, especially the Great Barrier Reef. Even if coal is burned in other countries, such as India, its use affects the rest of the world, leading to increases in global air and ocean temperatures, increased acidity of oceans and destruction of coral reefs.

Please recognise that the abandonment of the proposed Carmichael Mine is an economic and environmental opportunity, not a cost. The number of Australians that would be employed in generating electricity from solar would be many times greater than the number employed in the Carmichael Mine. In addition, the great economic benefits from tourism of the Great Barrier Reef would not be threatened, as they have been through coral bleaching last year and this year.

The only response was a short letter indicating the letter had been received. 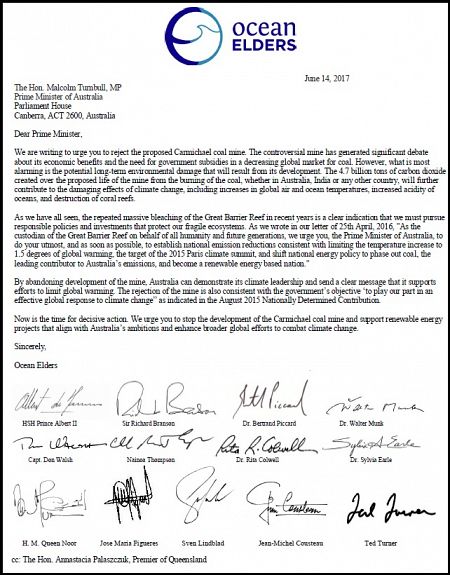 ... the potential long-term environmental damage that will result from its development. The 4.7 billion tons of carbon dioxide created over the proposed life of the mine from the burning of coal, whether in Australia, India or any other country, will further contribute to the damaging effects of climate change, including increases in global air and ocean temperatures, increased acidity of oceans and destruction of coral reefs.

Now is the time for decisive action.  We urge you to stop the development of the Carmichael coal mine and support renewable energy projects that align with Australia’s ambitions and enhance broader global efforts to combat climate change.

Senator James McGrath, Assistant Minister to the Prime Minister, replied to Ocean Elders on 10th August 2017, indicating that the PM had asked him to respond on his behalf:

Regarding the Galilee Basin, the Government has rigorous processes in place to ensure projects only go ahead after a thorough and evidence-based environmental approval process.

Thank you for taking the time to write. 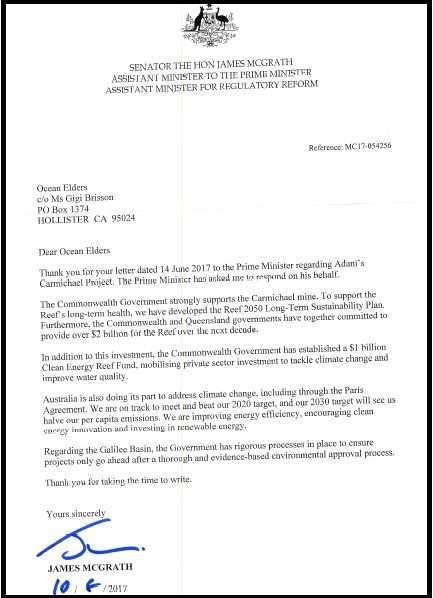 Queensland’s Galilee Basin is a 247,000 square kilometre thermal coal deposit. It is one of the largest untapped coal reserves on the planet. There are currently nine mega-mines proposed for the Galilee Basin, which together make it the second biggest fossil fuel expansion proposed anywhere in the world (after Western China).

The greenhouse gas emissions from the burning of coal from these mines is estimated at 705 million tonnes per annum (MTPA) — more than Australia’s entire annual domestic emissions of 542 MTPA.

At full production, the proposed Galilee Basin projects would double Australia’s coal exports to over 600 MTPA.

As the Ocean Elders wrote in their letter of May 4, 2015 to Julie Bishop:

Australia is at a crossroads in the management of one of the largest and most important marine areas on the globe. Decisions made now will determine its future.   We implore your Government to act in the long-term interests of the world’s oceans, the biosphere, and its human populations by taking positive action to protect the Reef.

Graeme Kelleher says the best possible solution for the Reef is to be declared a World Heritage in Danger.

The criteria for a Declaration include:

clearly ascertained and substantial threats to the values of the World Heritage area;

and – an apparent inability of the State Party to manage the threats and remedy the problem;

The dangers faced by these properties have been serious and specific. They have suffered impacts such as war, armed unrest, earthquake, continuing poaching, unplanned road construction, uncontrolled mining, hurricane, ecological collapse and uncontrolled pollution.

Stand up for what is right. Subscribe to IA.