Abbott's climate plan: The non-delivery of an invisible substance

Abbott's climate plan is to allow the big polluters to increase their emissions by 20 per cent over the next 15 years. Maximising emissions in the first few years will lock in a higher baseline with taxpayers' funds then sought to fix it. RenewEconomy's Giles Parkinson reports.

“a market, a so-called market, in the non-delivery of an invisible substance to no one.”

On international permits he went further, saying it was

”money that shouldn’t be going offshore into dodgy carbon farms in Equatorial Guinea and Kazakhstan.”

Now, it seems, the Abbott government is to allow Australian firms to buy these “dodgy” and “invisible” credits to help solve a problem many within and close to this government claims does not exist — reducing emissions to combat climate change.

The Abbott government’s draft rules on the so-called “safeguard mechanisms” was leaked to The Australian and rolled out to the rest of the world on Wednesday, and contains a bunch of other goodies for big business, and most specifically the largest polluters in the country.

The rules supposedly affect 140 companies, but analysts suggest that less than one quarter of them will be provided with any incentive to reduce emissions. 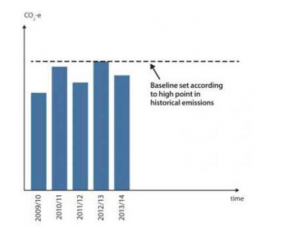 The “baselines” for business on the targets that they must not exceed – for fear of attracting a penalty – have been set at their most polluting year in the last five years, which effectively means that between now and 2022 there is no incentive for them to reduce emissions, unless they get a government handout to clean up a particular facility under the Direct Action emissions reduction scheme. They even get the opportunity to change their baselines, particularly in regard to new business.

Miners get an even better deal. They are allowed to increase emissions if, for instance, they have to dig deeper to extract their coal resources.

Energy market analysts RepuTex estimate that Australian high emitting companies will increase their emissions by 20 per cent over the next 15 years under the rules, and there will be no liability for the top 20 emitters — such as the major brown coal generators, and new LNG processing facilities.

According to RepuTex CEO Hugh Grossman

“The vast majority of companies will now have multiple ‘get out of jail free cards’ to play, so even fewer companies will now be liable, with most able to re-set their baselines as facilities expand, or gain a concession if emissions intensity decreases, even if absolute emissions rise.”

Will Hunt guarantee his 'safeguard mechanism' will reverse this? : pic.twitter.com/hwZXkMnYBm #auspol #climate

On the international permits, environment minister Greg Hunt says a final decision will be made in 2017/18, subject to the outcome of the Paris climate conference, and associated accounting rules.

But it seems that the Abbott government is now conceding what has been obvious to everyone but the government itself says — without a carbon price Australia has no hope of meeting even its own modest emission reduction targets at a modest price. So now it will try to tap into carbon trading schemes elsewhere, including the controversial and oft-derided UN trading scheme.

“This scheme does what it is designed to do — nothing to reduce pollution,” said Erwin Jackson the deputy head of The Climate Institute (TCI). He said the mechanism is so weak it provides no certainty for business,

“leaving us in economic limbo until government and opposition are prepared to send a strong signal to decarbonise the economy.”

This has been a common refrain from big business, and energy companies in particular, saying that they are reluctant to invest in anything until the government comes up with what at least looks like serious policy.

Hunt insists that “only the Coalition” is committed to taking serious action to tackle climate change without hurting Australian families and businesses in the process with a painful carbon tax.

He lauds the Emissions Reduction Fund (ERF), which contracted more than 47 million tonnes of reductions. But the ERF has already been criticised for providing money for projects that already existed, and offering little in terms of “additionality” — in other words, emissions that would not have happened otherwise. Meanwhile, electricity emissions have jumped sharply since the repeal of the carbon price and the cutting of the renewable energy target.

At least the mining industry is pleased. Minerals Council of Australia chief executive Brendan Pearson told The Australian that the government appeared to have taken industry concerns on board.

On that point he is right. As Kobad Bhavnagri, the head of Bloomberg New Energy Finance Australia, described these measures when flagged in May, they provide business with a “perverse incentive” of maximising emissions in their first few years, to lock in a higher baseline, from where they could potentially get taxpayer funds to reduce those levels.

The Australian Conservation Foundation said the proposed threshold for facilities covered by the mechanism is “ridiculously high” at 100,000 tonnes of pollution per year.

The mechanism sets baselines at a company’s highest level of pollution over a five year period, so there is no incentive for businesses to make their operations more efficient.

Big polluters would be allowed to re-set their baseline twice in the next ten years. If the government was serious about cutting climate pollution from industry, baselines would be set at the lowest level from the past five years.

In the meantime, The Climate Institute describes the mechanism as more of a pollution “trampoline” than a safety net. Erwin Jackson notes,

“Business and global capital will continue to sit on their hands or invest in other countries that are serious about cleaning up and modernising their economies.”

Which is exactly what the likes of Meridian Energy and others have said they will do.

This story was originally published in RenewEconomy on 2 September 2015 and has been republished with permission. You can follow Giles on Twitter @GilesParkinson.

Don't be fooled by Abbott's climate claptrap. Subscribe to IA for just $5.