Trade deals: A case study in why they're bad — like the Korea-Australia FTA

The TWU joins the Korean transport union protests this weekend as part of wider unrest at the South Korean government's labour reforms. TWU Secretary Tony Sheldon explains why the plight of Korean truck drivers matters to us.

FAINTING ON the job from exhaustion; working despite having broken limbs; being threatened with sacking and warned against taking too much time off work after falling out of a forklift.

These are just some of the experiences of truck drivers in South Korea. Pressure on drivers is intense with around 1,200 dying each year in truck-related crashes. Drivers hauling goods for large corporations struggle against poor treatment, which amounts to indentured slavery.

For example, drivers for food giant Pulmuone, who were on strike earlier this year, are forced to pay money to cover replacements if they are sick and miss work in order to keep their contracts. For over two decades they have not had a rate rise.

The South Korean government has openly sided with companies like Pulmuone, bringing in policies that strengthen their ability to exploit drivers. Last year, the police raided the offices of the union that represents truck drivers and jailed their representatives.

A national protest is being held this weekend by drivers demanding reforms, with the potential of a national strike in the near future. Korean truck drivers are demanding safe minimum rates and a strengthening of rules that will prevent exploitation. 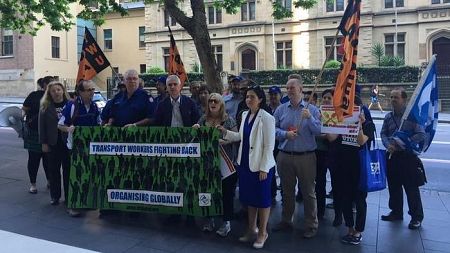 The truck drivers’ struggle is part of a wider battle in Korea against an intense anti-worker climate. The government has introduced legislation which keeps workers’ pay low, make sackings easier and restrict union activism. The president of the Korean Confederation of Trade Unions and several other union officers are in prison on two to five year sentences for organising protests against these regressive laws.

Meanwhile, struggles with major conglomerates such as Samsung have continued for years, marked by poor pay and conditions. Recent news reports that 76 Samsung workers died because of harmful chemicals in its factories indicates the level of disregard for its workforce.

The Transport Workers’ Union, which has been heavily involved in helping Korean unions agitate for change, will travel to Seoul this week to stand in solidarity during today's (Saturday's) protest and ongoing protests next week.

Why should the plight of Korean truck drivers concern us in Australia?

Why should the plight of these drivers matter to us here in Australia? Since taking office in 2013 the Coalition has gone on a spree of signing free trade agreements. A deal with South Korea was signed in April 2014 and came into forced just eight months later.

There are two issues that arise regarding trade deals such as this.

The first is that they allow for more migrant workers to enter Australia, with weaker rules on ensuring jobs go to workers here first. The Korean deal does just this, by broadening the “movement of natural persons” from Korea and allowing for 457 visa rules to be lifted, which require that efforts must be made to fill the jobs with workers here.

These provisions facilitate exploitation of migrant workers and drive down conditions for workers here. Anyone who has signed up to news alerts from the Fair Work Ombudsman will know that there is a problem with exploitation of foreign workers in Australia. Each day, the Ombudsman reveals cases it has pursued of underpayment, illegal sackings and intimidation of these workers.

Secondly, trade deals of the kind the Federal Government is pursuing legitimises anti-worker laws and actions among foreign governments. When Australia does deals with other governments, such as the Korean government, which violently suppress workers’ rights to protest and engage in trade union activities, we are effectively sanctioning this practice.

Anti-worker practices of companies such as Pulmuone are also legitimised in these trade deals. Companies are able to expand beyond their own borders and export their shoddy labor standards to other countries.

Truck drivers in Australia already struggle against a squeeze by wealthy retailers and manufacturers with their low cost transport contracts. Low rates means there is pressure on them to speed, drive long hour and skip mandatory rest breaks.

This results in a job marked by chronic fatigue, high workplace injuries and deaths, high suicide rates and high insolvency rates. Free trade deals mean a further squeeze by wealthy global clients demanding even lower cost contracts. They open up the potential for even more exploited migrant workers to drive trucks in Australia without proper training, putting their own lives and the lives of others at risk

The PM continues to misrepresent the facts behind the abolition of the RSRT, says TWU Secretary Tony Sheldon. https://t.co/lzdW3JWP3N

Ultimately, this is what the dividend of globalisation looks like — exported exploited labour, imported poor corporate practices and a handshake for governments for keeping your working population in check.

This is not right and is why the TWU is fighting alongside its Korean brothers and sisters.

In July, during a visit to Korea, I met jailed union delegate, Lee Jae-shik. Lee, a truck driver and member of the Korean Public Service and Transport Workers' Union, KPTU-TruckSol, took part in protests against the government’s anti-worker reforms and ended up with a 10-month sentence.

Despite his incarceration and prolonged separation from his young children, Lee was inspiring in his determination to keep up the fight.

Despite the potential violence by police and the threat of further jailing, he is vowing to keep for road safety and respect for truck drivers and all workers on his release from prison next month.

For those of us in Australia who believe in decent labour standards and worker rights we must support the struggle of Koreans and others around the world. The low standards and oppression they face today could be ours tomorrow. We must, therefore, make their fight our fight.

Barnaby Joyce is running ads re killing the RSRT this is what real owner drivers face - https://t.co/1NkSHUWepe @IndependentAus

Trade deals: A case study in why they're bad — like the Korea-Australia FTA

24 September 2016, 11:30am The TWU joins the Korean transport union protests this weekend as part of wider ...

3 June 2016, 4:30pm The abolition of the Road Safety Remuneration Tribunal had nothing to do with ...
Join the conversation
comments powered by Disqus
News updates