As the Anzac memorial era draws to a close, it is interesting how the Murdoch newspapers wallowed in the totally false story of heroic involvement of the Gallipoli fiasco by Rupert's father, Sir Keith Murdoch. Rodney E Lever sheds light on the myth.

KEITH MURDOCH was a humble and very ordinary reporter at the time, having been refused an appointment as a war correspondent, but instead secured a job in London setting up a wired news service for Australian newspapers.

His authorised account, published by the Murdoch family, presents Keith as a patriotic Australian who defied military censorship to bring down a bumbling British general (Sir Ian Standish Hamilton) and save the lives of thousands of Australian troops.

British casualties were much greater than those of the Australian and British troops. So were those of the French armies that were involved in the war.

Keith Murdoch, hampered by a nervous stutter that haunted his entire life, was struggling through his early career and was rejected for many of the jobs he sought.

He was on an island near Gallipoli for only two days. It is not hard to suspect that he might have been motivated not entirely by truth, but by seeking professional advancement.

Some of his reporting, such as a unproven suggestion that Australian and New Zealand troops had to be forced into battle at gunpoint, were probably not true at all.

Another reporter of a later conflict, Max Hastings, once admitted that while most correspondents want to try to deliver the truth

"most of us are driven predominantly by personal ambition and a lust for adventure.”

The Anzac story was not just of a botched campaign in which the Ottomans were the victors, but about personal rivalries and ambition at the beginnings and falls of great empires.

And at the heart of it all was the media at a time when there was really only one media, and that was the rival newspapers and their reporters.

Keith Murdoch played the game and was clever enough to exploit both his cunning and his skills to lift his career from humble reporter to major newspaper proprietor, later to be followed by his only son.

Two things need to be corrected. Firstly Keith Murdoch was not the founder of the Herald and Weekly Times in Victoria. The real founder was a lawyer named Theodor Fink, who made a lot of money advising businessmen, including the proprietors of the many rival newspapers that existed in Victoria. This was at a time when a severe depression resulted from the British banks, faced with the consequences of expensive wars, were forced to foreclose on mortgages and drastically reduce investment in Australia.

Theodor Fink took control of the failing newspapers as payment for his legal services and combined them into the Herald and Weekly Times. He remained chairman and managing director for about 40 years. His editor in chief, Keith Murdoch, was elected by the board to replace him and remained as head of the company for a mere ten years, when he died in bed one Saturday night.

On the previous day before his death, Keith Murdoch had sacked one of the company's senior executives, Jack Williams (later Sir John), who had been The Herald's financial writer for many years. Williams had been concerned about some irregularities in the company's affairs.

After Keith's death, Williams returned and was appointed by the board as the new chairman and chief executive. 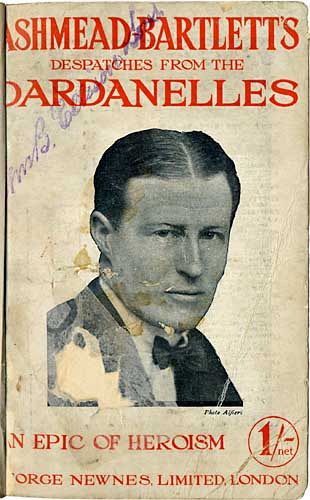 Keith Murdoch owed his own rise through the media to a British war correspondent named Ellis Ashmead-Bartlett, a correspondent for several Fleet Street newspapers, whose importance was emphasised by his own French chef, a stock of champagne and a yellow silk dressing gown.

Newspaper correspondents were not allowed near the war zone, no matter who they were. They were restricted to an island well away from the war zone. Keith Murdoch was photographed once at Gallipoli, but that was long after the war.

Murdoch left after only two days on a passenger vessel carrying his own account of Ashmead-Bartlett's view of the war not on in his own head but in the document he was to deliver to the London papers.

But when Murdoch reached London he was able to write his own account based on his own reading and his conversations with Ashmead-Bartlett and from that timed he had achieved the fame in journalism that he no doubt believed he had richly deserved and his career would therefore prosper.

Where does the truth lie about Keith Murdoch’s Gallipoli letter? http://t.co/Haac5RSDGe you should get this right.

Get the real story behind the myths and lies! Subscribe to IA from just $5.