The trials of Murdoch: News Corp get an F for management

IN A NEW BLOW for Rupert Murdoch, News Corporation – whose administration is now centralised in the U.S. – has been rated at the lowest possible level for management quality of any company in the States.

The rating of News Corp was made by respected U.S. based governance rating company GovernanceMetrics International, which uses an alphabetic system listing the results of its studies from A to F — with F being the lowest possible rating. Some other corporate examinations around the world use numerical ratings, but the alphabetic method is seen by GMI to be less liable to error. At F, GMI places News Corp among a ragtag group of Asian manufacturers whose operations are also considered to be clouded with risk for investors.

While there is obviously considerable argument in the highest reaches of world business about the reliability of the rating systems used, the results are nevertheless being published by some of the world’s leading financial newspapers.

WHEN the corporate governance of News Corp came under scrutiny after the phone-hacking scandal in 2011, Nell Minow of GovernanceMetrics International (GMI) ... was quoted (Financial Times, July 12, 2011) as saying: "We've consistently given News Corp an F, only because there is no lower grade."

The rating puts News Corp on a level with Alibaba.com, an online manufacturing and trading house producing goods in China and India, and JD.com, a Chinese company manufacturing electronics in Beijing and trading largely online. Both these companies apparently have a centrally controlled management structure, like News Corp, and strictly limit shareholder influence.

News Corporation has a dual-class share structure, which allows Rupert Murdoch and his family to control around 40 per cent of the votes while owning only about 12 per cent of the total outstanding shares. Such a share structure translates into board control by the Murdochs, as they can generally decide who is appointed to the board, even though the Murdoch family owns nowhere near a majority of the shares.

This, in turn, is seen by business commentators as likely to lead to weak boardroom oversight over management and the likelihood of corruption.

The News Corp phone hacking scandal in Britain, which has been under police and government scrutiny for several years and has led to a succession of criminal trials still incomplete. The outcome of the trials, expected later this year, could qualify as a classic example of corporate governance requiring stricter oversight.

In its latest quarterly earnings, News Corp reported that it has incurred legal and professional fees relating to phone hacking of $137 million for the nine months ending March 31, 2014.

Speaking of the hacking trials, journalist and IA contributor Peter Jukes, named Britain’s best reporter on social media and Twitter, is to write an 'uncensored' account of the phone hacking trial, to be published shortly after the verdicts.

Jukes, a former award-winning dramatist, has live-tweeted all 29 weeks of the trial of Rebekah Brooks, Andy Coulson and five other newspaper defendants at London’s Old Bailey since October 2013.

Provisionally titled The Inside Story of the Hacking Trial, his definitive, full-length book will contain all the material he has been legally barred from publishing so far. The final title of the book will be revealed when legal restrictions are lifted in the next few weeks.

It will be sold in four formats, including an e-book priced GBP £8.99, which can be pre-ordered from www.hackingtrial.com. 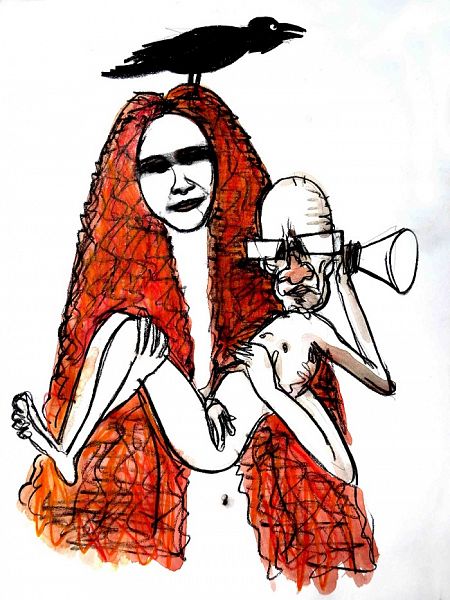 A selection of John Graham originals – including the picture above – are available from IA's online store. (See more of John's political art on his Cartoons and Caricatures Facebook page.)