The Sky falling on the Fox

Rupert Murdoch’s grip on News Corporation hinges on whether British regulators decide he is a fit and proper person to own cable giant BSkyB. Michael Collins reports.

Rupert Murdoch's reign over the $33 billion News Corporation hinges on events surrounding the company's ownership share of Britain's dominant pay TV network, BSkyB (Sky). As Business Insider said, "it's the only asset that really matters" in the News Corp collection of media properties.

As a result of Murdoch scandals, News Corp lost the chance to buy 100 per cent of Sky's shares. More troubling for the media monarch, the company may lose the 39 per cent interest it already holds if British regulators determine that Murdoch is not a fit and proper owner. This would fuel the major News Corp shareholder suits in Delaware and New York that seek to remove Murdoch as board chairman and vastly diminish his power and that of his family and cronies

Sky reaches 25 million viewers in 10 million homes. Revenues are growing at 10 per cent a year with adjusted operating profit growth averaging around 16 per cent of revenues (see 2009 through 2011). Revenues from 2012 through 2016 should top $70 billion total with adjusted operating profits around $11 billion. What happens with Sky really matters.

Despite this success, Murdoch's son James recently stepped down as chairman of the board at Sky. At the same time, News Corporation announced it would no longer seek to acquire the remaining 61 per cent of the public limited company. Murdoch is in full retreat from his most successful venture.

Imagine how the pension fund managers and beneficiaries must feel right now. Less than a year ago, their News Corp stock was poised for a strong boost when the company increased its 39 per cent share to 100 per cent ownership of Sky. That's over. The failure to acquire the remaining 61 per cent means a loss of $7 billion worth of expected profits over a five year period. That income is gone but not soon forgotten.

Announcing the withdrawal of its bid, News Corp said it was not possible to conclude the Sky deal "in the current climate." What they left out was a definition of current climate. That climate is characterized by an endless series of storms in the form of legal scandals relating to phone hacking, undue political influence, police payoffs, and, most recently, alleged organized hacking and piracy of security codes from pay TV rivals.

Here's a graph of what the Murdoch scandals cost News Corp: 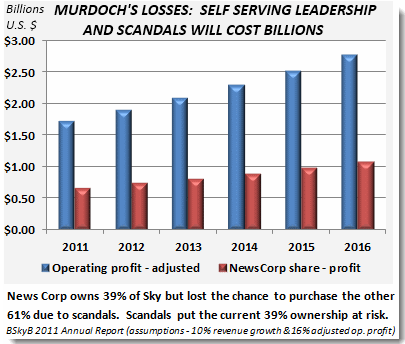 The public outrage was instant and enduring. Normally compliant with Murdoch's wishes and whims, British Members of Parliament actually took action. One focus was Murdoch's pending acquisition of Sky shares. The News Corp friendly review process was revised. The British regulatory agency, Ofcom, is still determining if Murdoch is a "fit and proper" owner of a public media property. With the flood of scandals, time is Murdoch's enemy.

When Murdoch realized that PM Cameron wasn't able to deliver on the Sky acquisition, he turned on the leader that he'd help elect. Murdoch's Times of London set up a sting of a Conservative Party fund raiser who admitted that large contributions to Cameron's party would gain access and favourable treatment for contributors. This is hardly news to Murdoch. It won't do him any good with PM Cameron who will no doubt look for an opportunity to return the favour.


The remaining 39 per cent of Sky at risk

As the Wehrmacht retreated from Stalingrad losing almost every battle, deluded Germans tried to comfort themselves with the knowledge that there was still a homeland and a chance to turn things around. Murdoch, his family and cronies are approaching their endgame with similar delusions. That won't change the hard facts that anyone paying attention can see clearly.

The new profits anticipated from the Sky acquisition will not materialize. Murdoch realized that the deck was stacked against him with Ofcom. He withdrew his bid.

The very same government and agency, Ofcom, will decide if Murdoch is fit and proper as the owner for the remaining 39 per cent of Sky. Why would the current climate for that decision be any better for Murdoch than the string of setbacks since the phone hacking scandal was kicked off on July 4, 2011?

By voluntarily withdrawing the Sky acquisition bid and having James step down as chairman, Murdoch told us what will happen with the Ofcom decision. He will likely lose the remaining 39 per cent of Sky.

Losing $70 billion in anticipated revenues with profits anticipated topping $11 billion is exactly the type of evidence the United States based shareholder law suit needs to oust Murdoch from the chairman position and effective control of News Corp.

The shareholder claims are strengthened substantially by events surrounding Sky. The full weight of $11 billion in profits, they will argue, proves that Murdoch runs the corporation as a personal fiefdom for his own enrichment and that of his family and, furthermore, that Murdoch's nepotism, questionable legal practices, and political bullying seriously impact company revenues, profits, and as a result, shareholder value.

The shareholder insurgency now has material proof. Lost profit opportunities over five years from failing to acquire the remaining 61 per cent of Sky could be as high as $7 billion. This quantifiable financial damage is necessary to bolster the shareholder case. It is certainly sufficient to prove the key assertion beyond any doubt — Murdoch is a disastrous manager who loses money and opportunities due to his poor management.

If British regulators force Murdoch to sell off the remaining 39 per cent of Sky, News Corp will take a major revenue and profit hit. The loss of several billion in profits in just the next five years would provide strong support for the claim that News Corp's alleged illegal, demonstrably quasi legal, unethical and vulgar behaviour is directly responsible for huge financial losses and the diminished shareholder value.

How much more do investment fund managers and the workers who contributed to those funds have to tolerate from Rupert Murdoch? Workers take the losses while Murdoch, his family, and inner circle get richer.